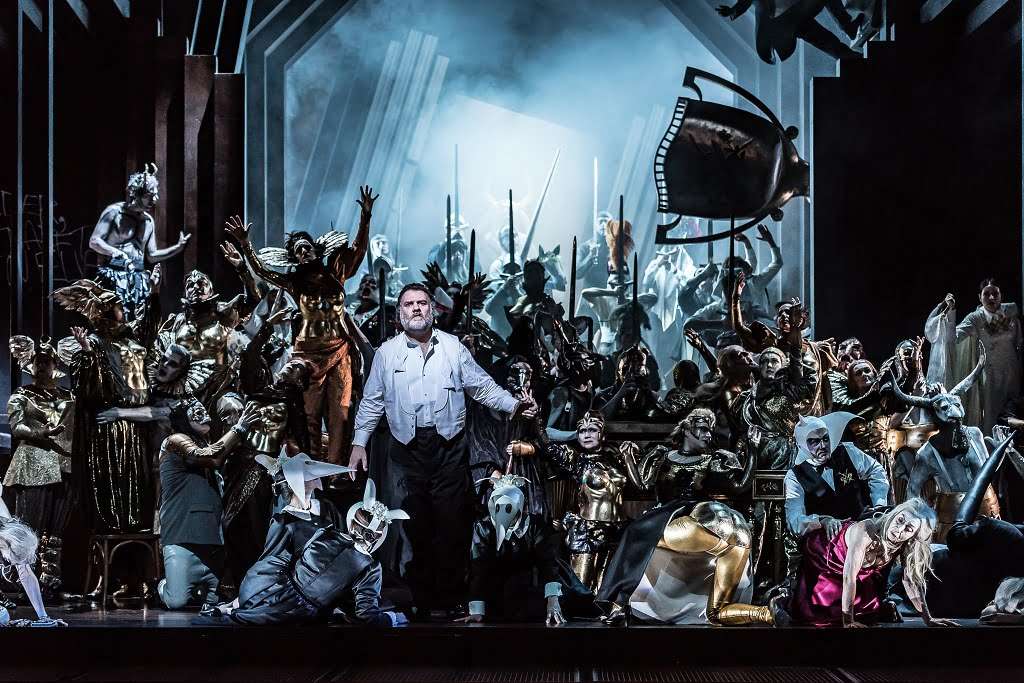 There are productions of Wagner’s Die Meistersinger to which one returns at any opportunity. Kasper Holten’s, his swansong as Director of Opera at Covent Garden, is not one of them.

At the top of the printed synopsis is Wagner’s much-quoted “Kinder, schafft neues!” (Children, do something new) – apparently the quote is grandson Wieland’s, regarding the new, post-war Bayreuth productions, repeating the gist of something very similar Richard wrote to Liszt – and, Walther, Wagner’s breath of fresh air oxygenating the stagnating old Mastersingers, scratches the same quote as a graffito on a wall of the set in Act Two. Holten has taken its direction, if not its message, very much to heart.

The opera is very particular about place – church, Hans Sachs’s and Veit Pogner’s houses in Nuremberg, the outdoor setting for the Song Contest, along with many allusions to nature – which is then transcendentally applied to one of the great universal meditations on the nature of art. In a much more risky undertaking, Holten’s contemporary setting moving towards a fancy-dress parade for Johannistag has removed these familiar points of reference to deconstruct the opera, but without going the whole Konzept, Regietheater hog. Ultimately he brings Die Meistersinger back home to its core message of renewal as vital to creativity, but Holten keeps his options open with a very ambiguous ending to do with Eva’s reaction to Walther being received into the worshipful company of Mastersingers. 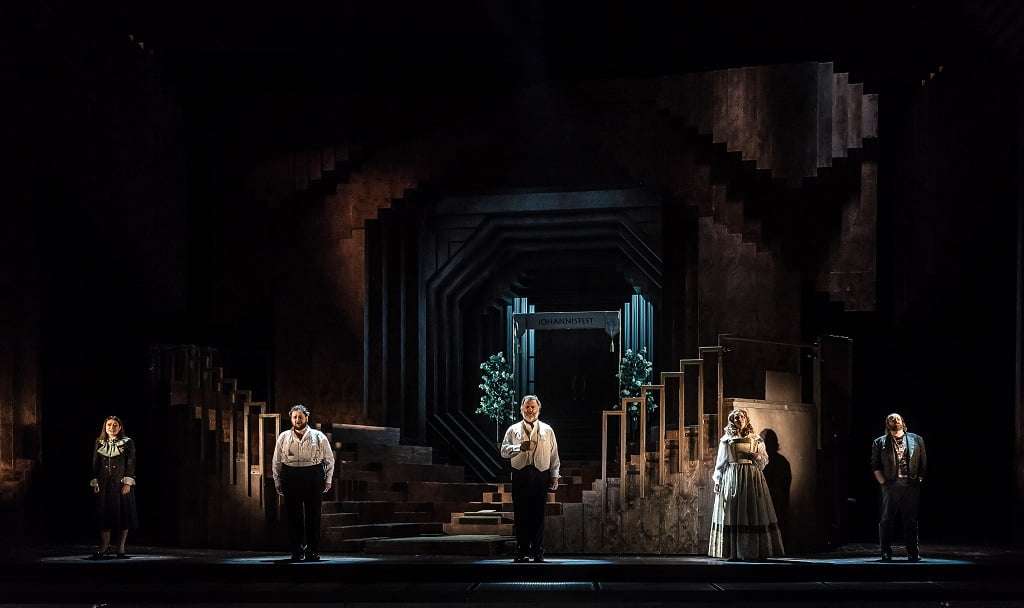 Apart from the quote, the programme-book also has a number of photographs of the establishment at its most confident, entitled and unassailable in their livery companies, and the imposing set – which dominates all three Acts – is first seen as the dark-brown interior of the Mastersingers’ club, an ugly, modernist riff on bankers’ baroque architecture, bustling with waiters and waitresses. How Walther, dressed in a grubby set of tails, gained admission is anyone’s guess, and ‘anyone’s guess’ is the mantra of the evening as you keep on wondering where Holten is going with his various directorial gestures, exceeding his brief beyond entertaining expansion into sheer bafflement as you try to get your bearings in a very busy staging in which it would be impossible to keep tabs on everything unless you were sitting really close to the stage.

As the curtain goes up, the chorus is not in church but at a choir practice directed by Hans Sachs, within the club (which, and sorry for being literal, mysteriously boasts an organ blazing away). The Mastersingers assemble for a dinner (minus their wives) decked out in full Masonic regalia. Apart from some half-hearted hammering to accompany Beckmesser’s serenade to Eva, Sachs’s trade as a cobbler virtually disappears, only admitted because it’s there but airbrushed out as much as possible. The riot at the end of Act Two is more like a collective midsummer hallucination, presided over by a cloven-hoofed Nightwatchman as a Lord of Misrule, with no bearing as to how we got there. 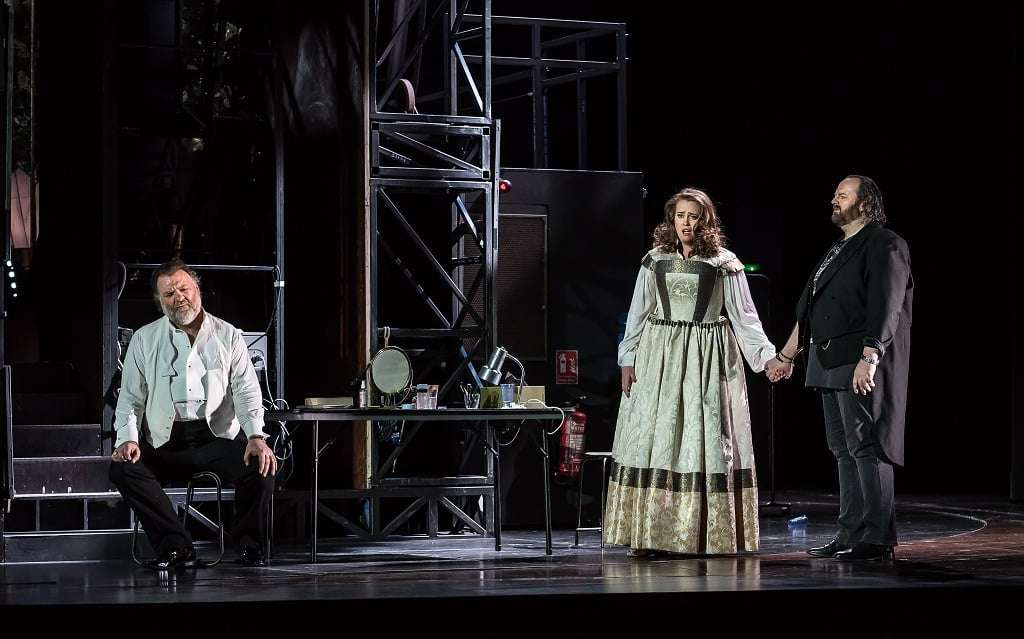 The set admits a couple of trees in pots to justify Sachs’s elder-scented soliloquy in Act Two, but it seems the sort of gesture grudgingly given only because Sachs sings about it. The rug has been pulled from our feet, but to what end? And it continues to be pulled as the set slowly revolves to become the backstage area of a theatre for the Act Three Quintet, and coming full-circle for the Song Contest, with the chorus in modern evening-dress enjoying the parade of folk in quaint finery. As for the ‘difficult’ stuff about “heilige Deutsche Kunst”, you might extrapolate a contemporary message from it, but otherwise it sits uncomfortably in Holten’s context.

We all have moments when Die Meistersinger hits us hard with heart-stopping recognition where music and drama collide – Sachs’s love for Eva and his Marschallin-like stepping aside for a younger model; Eva’s breaking-down to Sachs, where she kisses him hard on the mouth, then moving on to do the same to/with Walther; the Quintet; the pulverising burst of “Erwach” – but this is the driest-eyed staging I have witnessed. 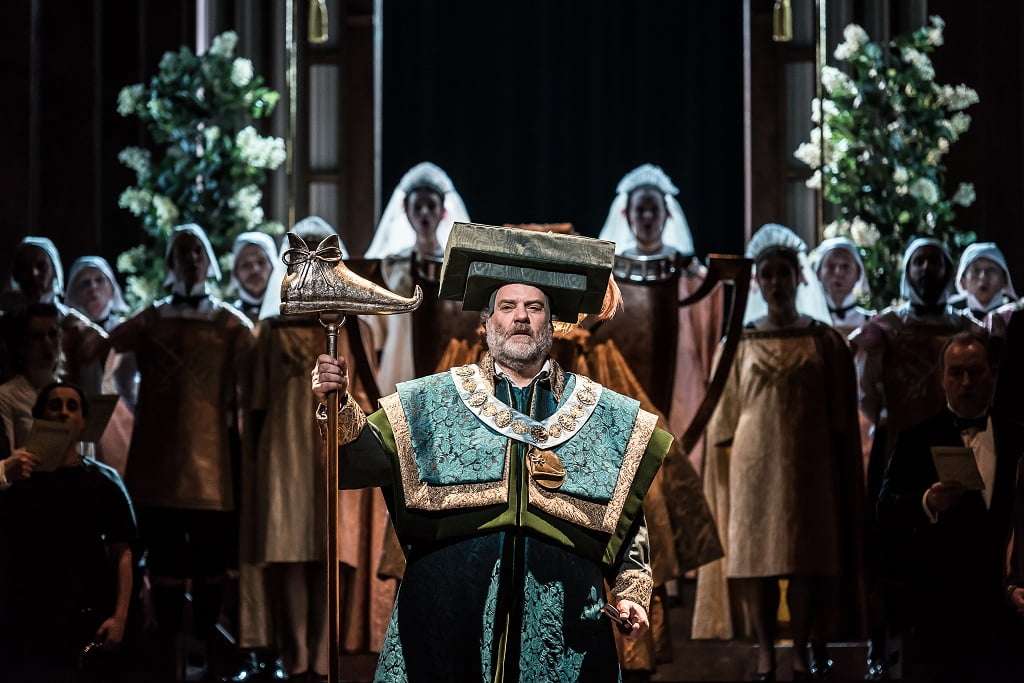 The biggest casualty is the cast and the relationships, which only intermittently come into focus, and all because the staging submerges them. Musically, though, it fields superb singing from a mouthwatering cast, and Antonio Pappano conducts the music with a subtle sense of irony emanating from the pit that doesn’t make it to the stage. The Prelude, with a wonderfully self-important tuba, set up certainties that we know will be subverted, Pappano’s sure dramatic pace and light, expository touch were beautifully done, and the additional brass appearing in the auditorium for the Act Three carnival was thrilling.

Bryn Terfel, a Sachs of many years’ standing, sounded much more at ease with the higher-written music, and he held the first part of Act Three together brilliantly, delivering a lovely, interior ‘Wahn’ monologue and underpinning the rapture of the Quintet. You can’t help feelings of affection towards him and his Sachs, while you wonder if this is in spite of the staging. Nothing seemed to faze Gwyn Hughes Jones’s effortless Walther in his progress to an outpouring of lyrical passion in the ‘Prize Song’. Rachel Willis-Sørensen came into her own in Act Two, and her full, warm singing and decisive acting make her an Eva to reckon with. Allan Clayton and Hanna Hipp as David and Magdalena both gave great pleasure, although David’s role as an apprentice, along with the excellent chorus of the other eleven apprentices, was odd in context. Johannes Martin Kränzle’s excellent Beckmesser was spared caricature-casting and was all the stronger for it holding the role together with a touching integrity. His despoliation of the ‘Prize Song’ is very funny. There was no notice of a cinema relay or of a Radio 3 broadcast. I advise the latter, if it happens.