It’s just shy of 20 years since Peter Stein directed “Falstaff” for Welsh National Opera, following the success of his “Otello” two years earlier, the acclaim for which allowed then general manager Brian McMaster to plan to bring “Falstaff” to London, where I saw it in October 1988 at Covent Garden. It was my first sight of Welsh National Opera live and my first “Falstaff”. 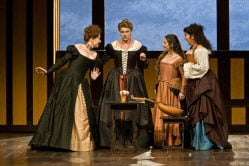 I hold this production very dear indeed. News a year ago that it would return to WNO’s repertoire with Bryn Terfel in the title role, singing his only opera of the whole year, was very welcome; but then there’s the problem that expectations can be elevated too high. So there was some trepidation…

My memory was not at fault. This was a spectacular. Stein’s non-interventionist way with the piece – quite traditional in many respects, particularly in the curtain-down scene-changes and two intervals – allows Verdi and Boito’s masterly command of both comedy and character to shine through.

Lucio Fanti’s framed sets, complete with red houses on the front-cloth (surely so packed together that a man of Falstaff’s girth couldn’t have manoeuvred between them!), cleverly evoke Elizabethan timbered walls. While Falstaff’s claustrophobic room is lit by small windows in the roof (later seen from outside, as the sodden Falstaff reflects on his dipping at the beginning of Act Three), the sets open out nicely for Verdi’s complex multi-layered strands, usually separating the ‘Merry Wives’ and their plans to humiliate Falstaff from both the bustling men under Ford’s ever-growing stupefaction in trying to foil what he believes to be his wife’s adultery and the two young lovers, Nannetta and Fenton. For the laundry-basket scene – Falstaff unceremoniously packed within – spiral staircases at either side of the timbered set see Ford’s men rushing up to the second level in their fruitless chase for the amorous Knight. 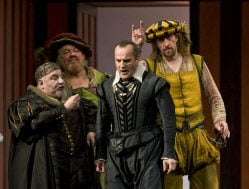 Stein, in an interview in the programme, notes that he doesn’t change his productions even with new casts. However, I can’t imagine that there weren’t some changes of detail with Bryn Terfel on board. With his half-bald pate and enlarged stomach, Terfel reprises one of his most famous roles, having already opened the refurbished Covent Garden in 1999 in Graham Vick’s production, conducted by Bernard Haitink, and recorded it soon after with Claudio Abbado and the Berlin Philharmonic. He is no stranger to Stein’s production either, having sung jealous Ford in the 1994 revival.

Every inch in character, Terfel not only sings beautifully but also adds both comic timing and a variety of groans and exhortations to his portrayal of Falstaff. Given that he has the last laugh, ending the opera with Verdi’s famous fugue ‘Tutto nel mondo è burla’, it seems entirely appropriate that Stein attaches him to wires and flies him heavenwards, as if the cupid of laughter, waving good-bye to Windsor and its cast of burghers.

Around him is a cast enjoying itself. Janice Watson and Imelda Drumm play the ‘Merry Wives’, ably assisted by Anne-Marie Owens’s Mistress Quickly, while pure-toned Claire Ormshaw brings genuine innocence to Nannetta, paired with Rhys Meirion’s earnest Fenton. Christopher Purves invests Ford with a suitable amount of irrational envy – lets face it he rather ridiculously pays Falstaff to attempt to woo his own wife! – and he is matched in his machinations by Anthony Mee’s diminutive Dr Caius – how do they expect Nannetta to accept Caius in marriage?

Carlo Rizzi (for the rest of the run replaced by Michal Klauza) brought both Italian fire and refinement to the WNO Orchestra, which sounded both burnished and ravishing.

If you haven’t already gauged my opinion, I urge you to see this revival. While there are no further performances in Cardiff’s wonderful, wood-clad, warm and welcoming Douglas Gordon Theatre, catch the production, with Terfel, in Birmingham (13 & 15 March), Llandudno (18 & 20 March) and – now – both in Southampton (27 March) and Milton Keynes (3 April), as Terfel has agreed to take over from his original replacement, Roberto da Candia who is ill. The production then visits Bristol (10 April), Plymouth (17 April) and Swansea (24 April) with Robert Poulton in the title role.

For those that can’t see it live, news that S4C will broadcast “Falstaff” as the first in a three-year four-production television deal, is all to the good, and the production will hopefully also find its way onto DVD.