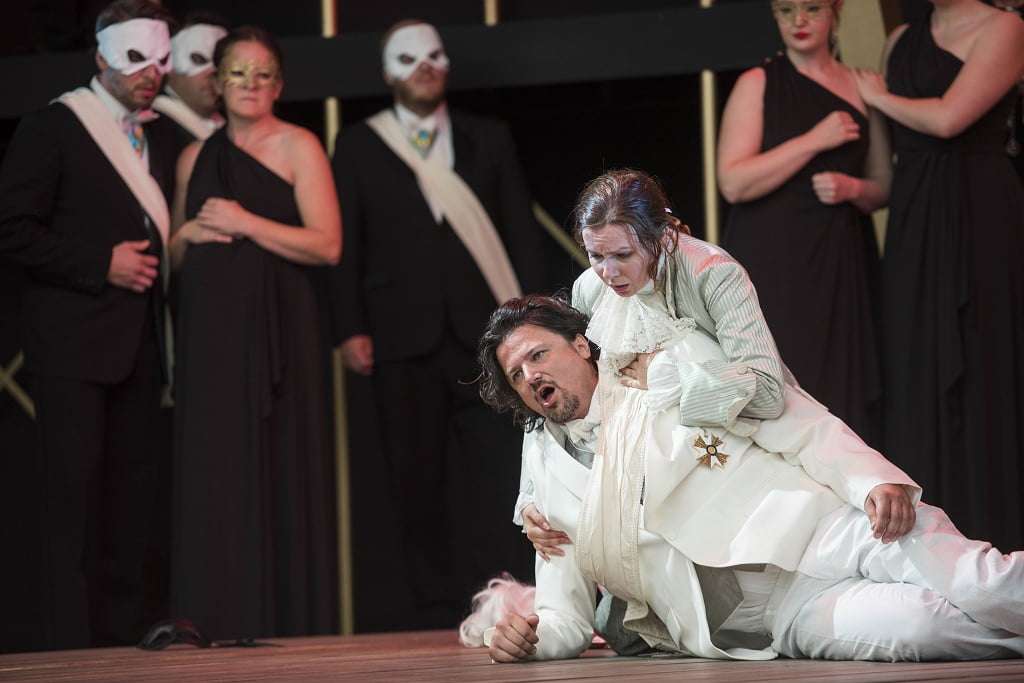 Unlike many of Verdi’s other stage-works, there is comparatively little dichotomy between the public and private realms in Un ballo in maschera (A Masked Ball), and so the generally open set of Richard Studer’s new production for West Green House Opera provides an appropriate forum in which the confrontation between Gustavo and the conspirators plays out. The prevailing black of the set looks sleek with its raised landing and staircase at the back, punctuated with gilt posts, allowing for the portentous comings and goings of the characters as they align themselves either in support of, or against, King Gustavo.

But that set also makes for a blunt contrast with the almost entirely white or beige costumes that inform the first two Acts. More precise delineation of character might be achieve through the figures’ dress, especially that of Ulrica and her cohort, about whom there is little sense of mystery or the demonic, as there should be in this later counterpart to the sort of role Verdi had previously created in Il trovatore’s Azucena. 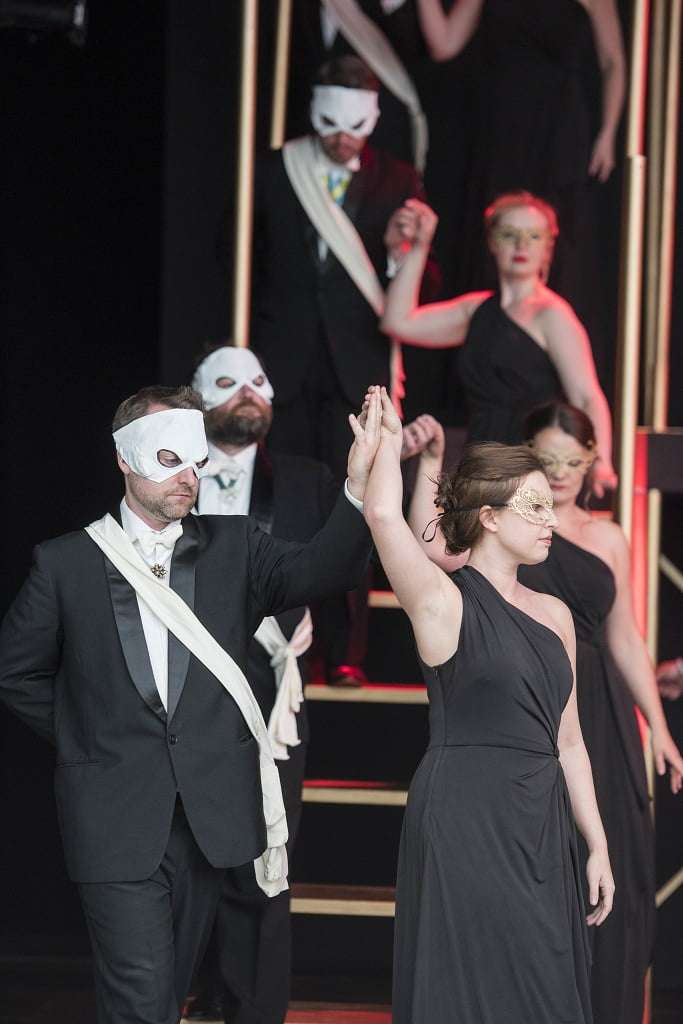 The two concessions to colour which are potent nevertheless: the conspirators Ribbing and Horn each wear sashes in the yellow and blue of the Swedish flag, indicating Studer’s restoration of Verdi’s original setting (before the censors intervened and the composer moved it to seventeenth-century Boston) which follows many other directors in this work in modern times; and Amelia’s veil is red, making a parallel with the mask by which Gustavo would later be identified at the ball in this production. More effective and suggestive lighting is used in Act Three as Anckarström forms his murderous alliance with Ribbing and Horn in order to exact revenge upon Gustavo for what he believes to be the latter’s adultery with his wife.

Admittedly any lighting in the first half would have made far less impact than in second, before dusk had set in to provide a suitable context for such illumination, but something surely needs to be done in order to create a darker, more compelling atmosphere for Ulrica’s dwelling and effect a contrast with the easygoing milieu of Gustavo’s court.

Even so, where the production leaves space for interpretation or imagination, an outstanding cast and thrilling orchestral support fills in the drama with a superb musical performance. Jonathan Stoughton leads the way with his characterisation of the King which emphasises not so much his generous, liberal attitude, as the flawed maverick in him (neatly implied by the co-respondent shoes he wears) that leads to his reckless disregard of the clues and advice given to him which point ahead to his impending assassination. The playful interest he shows in his page, Oscar, if not outright flirtation, hints at the alleged homosexuality of the historical figure of Gustav III upon whom the opera is based, a trait in his personality otherwise ignored by Verdi and his librettist, but which some directors have taken up. Although Stoughton had recently suffered a cold, it did little to hamper his expansive and vivid performance, other than to sound a little dry at times. Although Verdi apparently disliked the practice of a soprano taking a young male role, he relented in the case of Oscar and wrote some flighty and dazzling coloratura for the part, which Galina Averina brings off impressively with pinpoint accuracy and real flair. 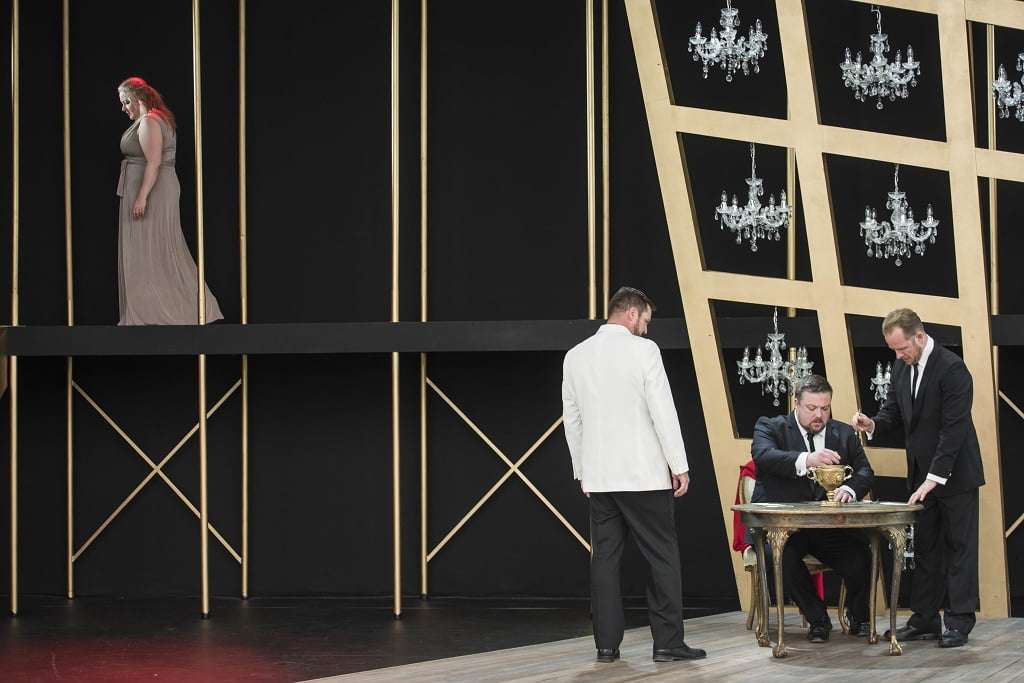 Rebecca Nash is no less technically or emotionally committed in the role of Amelia, the real object of Gustavo’s love interest. Nash is vocally strong throughout the broad range of Verdi’s writing, singing with passionate and steely ardour, and only a little more tenderness in the love-duet would make a fully nuanced interpretation. Similarly powerful is George von Bergen as her husband, Count Anckarström, initially the loyal friend of Gustavo, but who turns against him on discovering the King’s amorous overtures to Amelia. He certainly expresses determination of purpose and force of character, not least in his opening ‘Alla vita che t’arride’, though without further variation this tends towards a more anonymous, generalised interpretation than one responsive to every dramatic twist or turn. Similarly, there is no doubting Maria Gulik’s technical accomplishment as Ulrica, but as with her costume, a more idiomatic approach to bring out a sense of the occult would be welcome.

Despite the reduced orchestration, under Jonathan Lyness’s conducting, there is no impression of compromise, being imbued with an impetus and vigour that commands attention. Although the confines of the relatively small auditorium are unforgiving and provide something of a dead acoustic, there is strikingly full rein to impulsive sforzandos chords and ominous tremolandos which the players despatch unanimously to enhance the dramatic direction of the action. At other times the strings create a lush sonority for the romantic sections, providing an ideal contrast between each colour or tinto which Verdi uses so carefully. Not only is this an engaging production, the artistic standards at West Green demonstrate that it has come of age and bears positive comparison with its rivals in England that adorn the summer season.