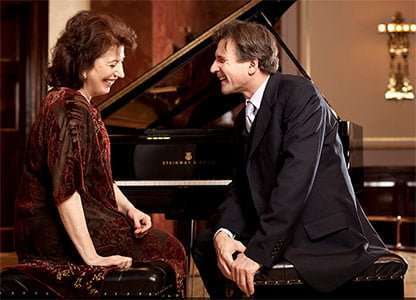 I first encountered Wolfgang Holzmair at Wigmore Hall in 1991 when he gave a performance of Schubert’s Winterreise with his then regular accompanist Gérard Wyss. Superficially it was memorable for the pianist mistaking the order of songs and starting the introduction to ‘Die Post’ out of place. The withering look that Holzmair gave him has stayed with me. Much more significant, however, was the arrival of a singer not yet forty who reconciled the two approaches to Art Song and particularly to Lieder which had been fought over for several decades. For one the singing line was paramount, the other sought to illuminate the text by emphasising and colouring individual words and introducing unwritten interpretative devices, a process commonly known as interventionism. The latter method was epitomised by Dietrich Fischer-Dieskau, who was at that stage approaching the end of his career but had shown no sign of loosening his commitment to such an approach; indeed arguably he applied it more rigidly as his voice declined.

Singers tended to be assigned to one group or the other. Now here was one in Holzmair, possessor of a singularly beautiful high baritone voice who was not limited to delighting his audience with sheer sound but could also explore meaning and nuance in the detailed interpretation of a song. Unlike his predecessor he did not need to make an ugly sound to communicate his ideas through the music. For a while Holzmair remained relatively inconspicuous and he did not have a prominent operatic career to attract wider attention. By the late 1990s, however, he had begun to appear on the major record labels and had established a fruitful partnership with Imogen Cooper. Wider international recognition did not preclude continuing and regular return visits to Wigmore Hall in a range of repertoire. As I remember it and recordings confirm, the voice which made such an impression in those days was of the Germanic lyric baritone type, with a solid middle register and plenty of bass resonance but, unusually, topped by fresh, clean, liquid tone above the staff, with a touch of vibrato but without any sense of changing gears when moving through the range.

The term “Farewell” can have an elastic meaning but this, we were assured by the singer himself and by Wigmore Hall Director John Gilhooly, was his last solo recital at the venue, after thirty-six or thirty-seven over twenty-four years. (But he will be back next year for masterclasses.) The singing certainly did not suggest that the retirement, at end of next year, is caused by the voice being in serious decline. The piano was on full stick, so reduction in volume seemed unlikely to be an issue. As for the singer’s sound itself, the smoothness of tone seemed at first to have been lost in favour of a rougher, edgier timbre. The programme was a heavy one: sixteen Schubert songs to poems by Johann Baptist Mayrhofer, including a number of settings of the poet’s monumental treatments of incidents from classical mythology. The singing of the opening Aus Heliopolis II was rather muted, given that the prose calls for the poet to seek inspiration from the exhilaration of physical activity outdoors. Several of these poems are about misfortune. Philoctetes has been robbed of the bow which procures him nourishment because of a prophecy that only it and its arrows can ensure the capture of Troy. The harsher sound which the voice seemed now to have acquired gave a more resentful edge to his complaint.

Another common theme for Mayrhofer is the isolated individual. Atys is the shepherd who has been abducted by the goddess Cybele but who cannot find fulfilment and wishes to return home. The desperation of his appeals and his self-pitying declarations were intensified by the change of timbre. Cooper went with her partner in underlining the pathos. The combination of triplet chords in the pianist’s right-hand and the downward motion of the left which appear in this song is a Schubertian fingerprint of death. Atys envisages committing suicide by falling from a height, as the poet himself was to do.To balance Fahrt zum Hades, Der zürnenden Diana (the story of Actaeon’s punishment for observing Diana naked) and these other tragic songs, in Der entsühnte Orest the hero celebrates his return from exile. Cooper’s playing of the beautiful piano figures as Orestes describes the spring flowers which line his path was enchanting and Orestes’s concluding lines particularly touching.

The superb, adventurous Freiwilliges Versinken can only have achieved the effect it did with both artists in fine form and partnership. The pianist sets the tone here: the marking is Langsam, as so often in these songs and is never abandoned, while the heavy trills in the bass reinforce the solemnity of the vision. The magic of night’s onset was gloriously suggested by Holzmair’s delicate head-voice in the high upward phrase at “Ich scheide herrlich, naht die Nacht” and the final phrase “in weiter Ferne”. Then Cooper completed her circle with the hesitant climbing phrases which confirm that the moon and stars have risen and settled in the sky. It was at this point that one sensed that the tension of the occasion had dispersed and that Holzmair’s voice had settled into something reminiscent of the singer in his prime, ready to take the risks which were then so typical of him. The remaining songs in the recital’s first half were aquatic. The duality of Auf der Donau, which begins as a gentle barcarole before changing to disturbance and dejection at mankind’s failings, confirmed that a fine legato was still a feature of Holzmair’s vocal method. The performance of Der Schiffer which followed was as spontaneous an expression of physical exhilaration as any Schubertian could wish for.

The singer turned to a score (and spectacles) for the lengthy, ballad-like Einsamkeit, in which the (initially young) man undertakes what Richard Stokes describes as a “pilgrimage through life”, taking in spells of monastic isolation, urban hedonism, social immersion, faithful love and military conflict before, finding none of them satisfactory, he reaches the end of his life, sure only that solitary enjoyment of nature offers the happiness he seeks. Cooper’s vivid musical depiction of each episode contributed much to an enthralling twenty minutes in a genre where interest can swiftly wane. Holzmair offered a wide range of responses to his experiences, painting sundry characters he encountered en route by vocal means alone. The challenges for the performer were evident from the very first section, in which his voice remained perfectly focused through the long, high-lying phrases. Elsewhere his mezza voce was admirable. This is a composition which might profitably be taken up by other singers.

One assumes it was symbolic that night should have been chosen as the common theme of the four remaining songs. Mayrhofer’s metaphysical teaching can be heard in Die Sternennächte, while Trost portends his suicide. The popularity of Lied eines Schiffers an die DIoskuren is easy to understand. Both artists contributed to the magic hush which characterises it and to the ecstatic exuberance of Auflösung. By this stage I could hear those heady streams of golden sound pealing through the Hall as of yore. Its downbeat ending gave Holzmair the opportunity to stand motionless for several seconds before inviting applause. The audience, by now mesmerised, did as he wished. The singer was presented with a framed copy of the programme of his debut recital at the Hall in 1989. In a gracious speech he harked back to that concert which had included seven of the songs heard at this farewell, paid tribute to his pianist partner and to the audience, told us that some of his most rewarding musical experiences had been at Wigmore Hall and explained that this was the appropriate time to stop. Two encores were given of which the second was ‘Fussreise’ from Hugo Wolf’s Mörike collection.