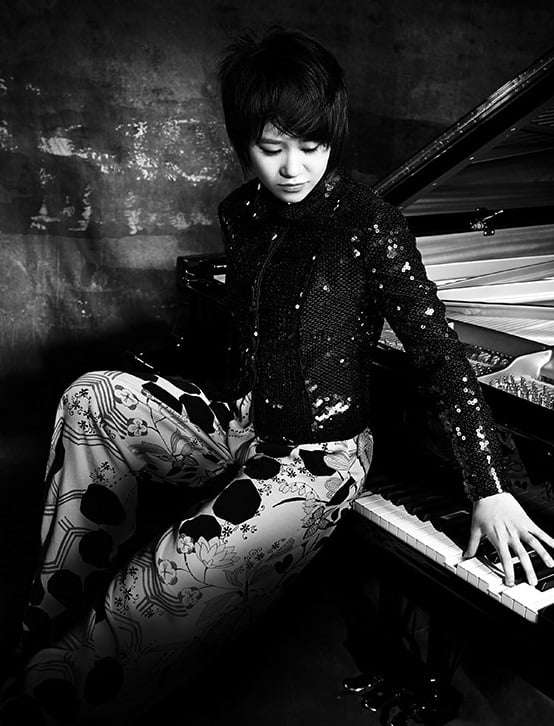 Tigers and dragons immediately sprang to mind listening to Yuja Wang’s inflammatory recital. Much of this covered what might be described as classic Horowitz territory. Any fears that Wang might have bitten off more than she could chew were immediately dispelled by the opening Rachmaninov group led off by a swaggering account of the G-minor Prelude from Opus 23, commanding not just the necessary weight of sound but also, in the lyrical central section, an ability to voice the inner parts. We also had two Études-tableaux in C-minor and two in E-flat minor, from Opuses 33 & 39; pairing the right ones together to create a satisfactory sequence can introduce variety. The initial Étude (C-minor, Opus 39/1) also made particular sense because it has distant echoes of the Prelude which immediately preceded it. Wang succeeded with the massively gloomy Opus 33/3, caressing it into fife in deep velvet, achieving a huge variety of tone colour and evoking the gently tolling bells of its the central section before immediately following it with a near-miraculous contrasting delicacy and dexterity in Opus 39/4.

For those of us who love Scriabin’s music it was a rare treat to hear his final exploratory Piano Sonata played with such finesse, power and perception, music which will never be popular any more than some of those strange religious cults such as Theosophy popular at the turn of the last century are ever likely to make a comeback. The Sonata exists on several levels simultaneously, often almost out of this World as though one were drifting powerlessly through outer space. It places huge demands on the performer, demands which Wang met triumphantly, sorting out its various strands and achieving a vast range of sonorities with complete abandon.

More extreme technical demands followed with three of György Ligeti’s eighteen Études – “the stuff of nightmares” (Jeremy Denk). The initial ‘Blocked keys’ is evidently even harder to play than it sounds and the following ‘Vertigo’ elicited the most extraordinary sounds at its opening whilst Wang concluded with ‘Disorder’, dedicated to Pierre Boulez, and that each hand should be able to operate independently of the other but also here in different metres.

The second half brought us Prokofiev’s Eighth Piano Sonata, the last of his wartime trilogy. It is an elusive work which perplexed its first audience. Whilst its Finale – one of Prokofiev’s toccata-like creations may be an instant crowd-pleaser, neither of the two preceding movements is easy to bring off. The first opens innocently enough but eventually erupts into extreme violence before reverting to the opening and then out of nowhere concludes in a tornado of a coda; the second feels like Schubert transcribed for the twentieth-century but with an underlying sense of gnawing disquiet. Wang played it all with total commitment. If one has a minor criticism it would be that the first two movements ideally require a more ‘take it or leave it’ less approach. Here, they were almost too beautifully voiced for their full ambivalence to emerge. One could imagine a beetle-browed Gilels, its first performer, in severest mode. About the torrential whimsical Finale however there could be absolutely no doubts. It was quite simply a knockout.