Continuing the weekend marking the threecomposers represented in this concert who died in 1934, judicious programme planningfound two ‘popular’ works framing a rarity. 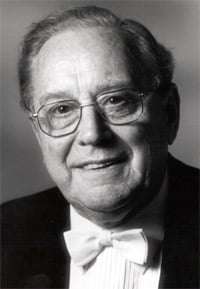 Elgar’s picture-portrait (perhaps an idealised one) of London made fora bracing opening, with Sir Charles Mackerras leading a vigorous and stimulatingperformance. Initially, there were some ensemble issues, off-beat accompanimental figures not quite together, but thismay have been an acoustical phenomenon, since there was further evidence of it inthe Holst, where some repeated crotchets, for instance, sounded likequavers. Mackerras handled the softer passages of the Elgar most tenderly and affectionately,and the whole was rounded off by a glowing coda (with resplendent organ)and climactic timpani whose notes, again due to the acoustic, werericocheting around the hall.

Delius’s elusive impression of the Norwegian landscape was given aforthright reading – one can imagine a gentler approach overall – whichbrought out the strength the of writing and distinctive scoring. Ofparticular note was the contribution of three timpanists – not theremerely to provide atmospheric rumblings (though there are plenty ofthose) but to initiate melodic ideas. The angular horn-writing wasconfidently executed and the BBC Philharmonic’s contribution was mostdistinguished. The soloists and chorus provide a wordless contribution, enhancing theimpressionistic effect of the whole. Again, the singing might have beenless prominent – there was little sense of the sound coming “from adistance” as indicated in the score – but the accuracy of theirvocalising was reward in itself.This was, withal, a worthy revival of a work that should be more widelyheard.

There is no problem of neglect, of course, with Holst’s “suite for large orchestra”(so described in the score, not “symphonic suite” as given in theprogramme; The Planets is one of the mostpopular of all British works of the twentieth – or any – century.

There was nothing at all hackneyed about this colourful and convincingperformance – indeed, conductor and players seemed to set aside anysense of routine and focussed, instead, on the challenges presented bythe music itself.

Wooden sticks on the timpani (as indicated) made for a strikingimpression at the start of ‘Mars’, but the dynamic was too loudfor the given marking of piano and unmarked accents did not contributeappropriately to the ominous, insistent rhythm.Nevertheless, the music’s momentum was surely built, culminating in ahuge ffff at the movement’s climax.

Poised solo playing was a distinctive feature of this performance of’Venus’ – a coolly expressive reading contrasting most effectively tothe music which preceded and followed it. The fleet-footed quality of ‘Mercury’ waswell-conveyed, with delicate, chattering wind and strings articulatingthe notes and rhythms with virtuosity.Bustle and appropriate jollity pervaded this ‘Jupiter’; perhaps the ‘big tune’ was alittle loud for the mf marking initially, but its warm-hearted deliverywas compensation enough.

Conversely, ‘Saturn’ was menacing, its tread remorseless. I can’t recalla slower performance or a more alarming climax. Again, the orchestralplaying was unimpeachable. ‘Uranus’ was no mere magician waving a wand, but a supernatural-beingwith terrifying powers – the climactic tutti (the last such in The Planets), surely indebted to the sonority of the final dance of Stravinsky’s The Rite of Spring was crowned with a – for once – audible and scary organ glissando.

The rarefied, otherworldly quality of ‘Neptune’ made for a chillingconclusion (thank goodness we were spared that ghastly ‘Pluto’ movement by Colin Matthews which has ruinously damaged Holst’s ending when appended in recent years), with the choral contribution unusuallyaccurate in terms of intonation. I must note, however, the inexplicableomission of a cymbal roll at figure II.

This was, altogether, a most authoritative performance, revealing The Planets in a new-minted fashion and verifying its remarkable originality.