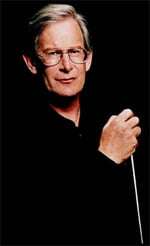 The main event of “Bach Day” was this performance of the “St John Passion”. John Eliot Gardiner’s idiosyncratic direction did not always best serve the score; but this is one of those rare works with a greatness that transcends the minutiae of individual interpretation, and the heartfelt performance was ultimately deeply moving.

The orchestral contribution of The English Baroque Soloists was outstanding: the incisive, well-articulated crispness of the dramatically churning introduction epitomised the playing throughout. Gardiner allowed his orchestral musicians far more natural expression than The Monteverdi Choir, which – despite its excellently clean ensemble and glorious sound – had almost all spontaneity and individualism precision-drilled out of it.

Gardiner’s indulgent approach was felt most detrimentally in the chorales, which were fussy and precious: tempos were pulled around (they were often far too slow), Bach’s punctuation and phrasing was frequently ignored, and the Choir’s (immaculate) consonants excessively laboured to point specific words unnaturally. Occasionally, in some of the ‘crowd scenes’, the Choir managed to shine: the fugal “Wäre dieser nicht ein Übeltäter” was intense and exhilarating, astonishingly clipped phrases injected with furious energy.

Mark Padmore was on superb form as the Evangelist: a strong, confident reading which fully communicated the text without (often) resorting to undue theatricality. In radiant voice, he sailed almost effortlessly through the demands of the role. Peter Harvey’s Christus conveyed dignity and gravitas, and Nicholas Mulroy gave a spellbinding performance of ‘Erwäge’ – gentle and intimate, with none of the overt rage often poured into this aria. He held the audience in rapt, intense silence.

Other soloists were less impressive. Matthew Brook had neither a smooth tone nor sufficient power in his lower register to be heard in the cavernous Royal Albert Hall (in which audibility was generally a problem with such small forces). Soprano Katherine Fuge faltered in ‘Ich folge dir gleichfalls’; her voice had more bloom in ‘Zerfliesse, mein Herze’ although she struggled to sustain Gardiner’s slow tempo. Robin Blaze was disappointingly underwhelming.

Gardiner’s speeds got slower as the work progressed – often too slow for comfort, though always maintaining a strong pulse. The final chorus, ‘Ruht wohl’ seemed very slow indeed, but it was well pointed and sung with great conviction.

The near-silence of the capacity audience throughout the performance (there was no interval) was tribute to the intensity of Gardiner’s reading, the integrity of which spoke through despite his propensity to over-egg, and – above all – the supreme mastery of Bach himself.