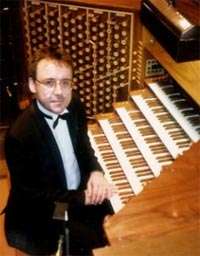 Given the participation of such a fine player as David Briggs, it was a pity that there was not more of an opportunity to hear other examples of ‘original’ Bach organ music (some of the Preludes and Fugues, for instance) during the course of this Bach Day.

A strong, forthright performance of the Passacaglia and Fugue in C minor started the recital, and one appreciated Briggs’s security of technique and command of the instrument. There was a sense of the inexorable about this performance aided by the generally loud dynamic level. Some might have preferred more variety in registration, but Briggs’s choices in this regard had their own validity.

Sadly, this was the only ‘straight’ Bach included, as David Briggs did not play the Chorale Prelude ‘Wachet auf, ruft uns die Stimme’ (known in English as ‘Sleepers, wake!’ and derived from Cantata 140) in Bach’s own version; though there was no indication in the programme that he would do otherwise.

Instead of preserving the composer’s austere three-part texture, Briggs ‘filled-out’ the harmony in places, much as an organ continuo-player would in a performance of the Cantata. With a somewhat bland-sounding counter-melody along with some fussy phrasing, this was a disappointing rendition.

I didn’t much care for either of the transcriptions by Taylor or Fox. Both suffered from some thick-sounding chordal textures (a fatal flaw when writing for the organ) not assisted by some mushy registration. Perhaps the latter was intended by the transcribers; in any event, it did not enhance the music itself.

David Briggs has arranged many works (including Mahler’s Fifth Symphony) for the organ with a great deal of success. Whether or not Bach’s D major Orchestral Suite needs such transcribing is perhaps a moot point; I would rather hear the original. Suffice it to say that the Suite was played brilliantly, with plenty of spirit and variety of texture, even if the concluding ‘Gigue’ sounded somewhat elephantine in quality on the RAH organ.

David Briggs then returned to play the ‘Badinerie’ from the B minor Orchestral Suite by way of an encore. With a delightfully chosen array of stops, this ‘worked’ really well, in contrast to some of the items included in the recital as a whole.