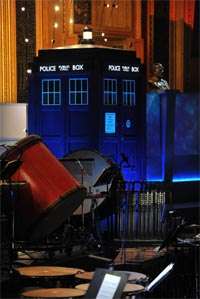 The Sunday morning after the Saturday evening: a repeat of the Doctor Who Prom. One thing that stood out is the apparent ease in which duplication took place. Not in the sense of repeating the previous night’s music, dialogue and all, but the flawless reproduction of the music from the TV series in a live setting, which is a real art and one that was effortlessly exercised.

From the opening reminder to turn off mobile phones – thoughtfully provided by a Dalek with the threat of extermination – to the Dalek-shaped programme – to the fez that was placed on the bust of Sir Henry Wood, this performance was produced with the familiar deftness and eye for detail that has accompanied the series since its return to our screens in 2005. As is usually the case in this kind of concert, amplification was used throughout – to mixed effect: the music of Murray Gold, which accompanies the TV series benefitted; THE REST DID NOT. 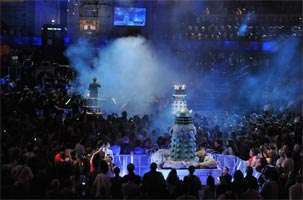 The largest part of the concert was, unsurprisingly, made up from the music of Gold whose scores has adorned “Doctor Who” for the last five years. As Steven Moffat (Lead writer and executive producer who took over from Russell T. Davies for series 5) says that “without the extraordinary brilliance of Murray, Doctor Who would have the sound turned down forever”. Like his predecessor, Moffat uses the music from past episodes as inspiration in writing new instalments. “Doctor Who” had been in the wilderness for sixteen years until Davies made it into a profitable primetime show once more, the music of Gold proving ‘pure gold’ in revenue terms for the BBC with, so far, music for the first four series released on CD and that of the fifth surely not too far away.

The concert was never going to be more than a showcase for the TV series, its music, the latest incumbent, Matt Smith, his assistants and, of course, the Doctor’s adversaries. In this sense the Prom did not disappoint as the orchestrator of the music, Ben Foster, faultlessly conducted the music accompanied by scenes from the latest series five, or season 31 if you are counting from the first episode in 1963. Many eyes were fixed on the action played out on the multitudinous monitors around the hall rather than the orchestra. Taken on its own, and without the screen-scenes, the music, like in many but the very best films scores, falls flat as it is quite derivative if not entirely appropriately matched to the pictures with which it is a collaborator. 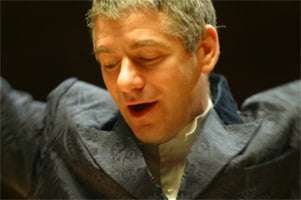 By contrast, the ‘classical’ pieces seemed like an insincere nod to the music that is at the heart of the Proms. The attention of the many children that filled the hall was short at the best of times, only turning to wide-eyed amazement when Cybermen, Daleks, Silurians, Judoon, and the Vampires of Venice made their presence known throughout the hall. John Adams’s Short Ride in a Fast Machine was taken at a good speed and its cross-rhythms were well articulated but the rest the orchestra seemed to be playing the dots and marking time until the real music came back.

Not unexpectedly, the hall was filled with fans of the long-running series (including older fans like me!) There were a number of references – “don’t blink” for example, referring to the statues seen first in a Series 3 episode entitled “Blink” that move when no-one is looking at them – references which would have been lost to any audience-member unfamiliar with the franchise. This was not the case on this occasion as one of the statues rose menacingly in the centre of the Arena.

As for the monsters, they seemed less-scary than they did thirty years ago, and certainly the close-up shots and quick-fire cutting of the TV show makes the current collection of fiends appear more ominous. For the children in the hall the fear that has made millions of them hide behind their sofas was exchanged for curiosity as they were given a chance to get close and personal with a monster of their choice. Judoon, the interplanetary thugs, look much less threatening when in a hall of 5,000 people sharing the experience and without the army of CGI technicians to back up their ferocity.

Murray Gold was present, not as an observer but as pianist in his music to accompany the return of Planet Earth to its rightful position in the heaven – “Song of Freedom”. Sounding suspiciously like The Battle music from Hans Zimmer & Lisa Gerrard’s soundtrack for “Gladiator”, the music proved a stirring finale to this Prom, though a request to clap along seemed out of place. Gold, as composer, is no one-trick pony, though “Doctor Who” has dominated his CV since 2005. His scores have earned him BAFTA nominations and other awards during his thirteen-year stint as a composer for films. Ever busy with “Doctor Who” commitments (including the music for spin-off series “Torchwood” and the “Sarah Jane Adventures”) Gold has nevertheless found time for a film score: “Hoodwinked Too: Hood vs. Evil” that has yet to be released.

Almost as an encore Ron Grainer’s iconic “Doctor Who” theme music was given a refreshing coat of shiny new paint by Gold and, like the shiny new TARDIS sitting silently at the back of the stage, symbolises the ground into which the “Doctor Who” charter is now forging. There is little doubt that Russell T. Davies is the person who turned around “Doctor Who”, but under the guidance of Steven Moffat the new series, with its new Doctor has been an undoubted success and the music of Murray Gold as an integral part of that achievement. With a Christmas special and a new series due in Spring 2011 there are no doubt plenty of storylines the series can explore and, with it, new surprises in the music of Gold. You don’t need to be a time-traveller to predict that there will be “Doctor Who” Proms in years to come.