Murray Gold
Concert Prologue
Copland
Fanfare for the Common Man
Gold
All the Strange, Strange Creatures
Turnage
The Torino Scale [UK première]
Holst
The Planets – Jupiter, the Bringer of Jollity
Gold
The Doctor Forever; Rose; Martha vs The Master
Special mini episode – Music of the Spheres – written by Russell T. Davies, starring David Tennant, with music by Gold
Wagner
Die Walküre – The Ride of the Valkyries
Gold
The Daleks and Davros; Donna – Girl in the Fireplace – Astrid
Prokofiev
Romeo and Juliet – Suite No.1: Montagues and Capulets
Gold
This is Gallifrey; Doomsday; The Doctor’s Theme/Song of Freedom; Song for Ten
Ron Grainer, arr. Gold
Doctor Who Theme 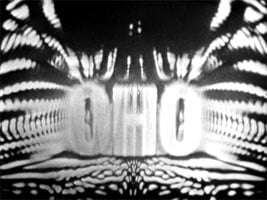 With a pulse from a borrowed sonic screwdriver, Roger Wright – Director of the BBC Proms – seems to have transformed the annual children (or in this case definitely family) prom, by regenerating the old Blue Peter Prom into the Dr Who Prom.

I suspect that the Dr Who Prom this year will be remembered as the Simón Bolivar Youth Orchestra of Venezuela Prom was last year. Certainly it seemed to similarly redraw the already inclusive nature of the concert series, and got even closer to the audience by having live Dr Who monsters parading the stairways (including the balcony and boxes) and arena. In short, this was a triumph and, if you’ll pardon the pun, simply ‘out of this world’.

We had ood (the squid faced life-form, bred to act as slaves), dijoon (the armoured rhinoceroses who first appeared when Martha Jones was introduced to the Doctor, when her hospital was kidnapped and dumped on the moon), cybermen (no introduction necessary, although I think their original garb is better than the updated version) and sontaron (complete with Commander Skorr), topped in the second half not only by a dalek (which electronically cackled: “we have the building surrounded, and have held Henry Wood captive”), but also the arrival from beneath the arena of Davros himself. 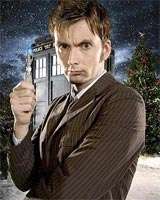 The kids loved it – and I’m not the only adult that loved it too. The Tardis was behind the BBC Philharmonic, just to Sir Henry Wood’s right (as he looks out across the Hall), and we had a specially written episode, about seven minutes long, which brought us David Tennant’s irreplaceable Doctor into the auditorium (he couldn’t be there live as he’s playing Hamlet in Stratford, although we heard he was listening live on BBC Radio 3). Russell T Davies’s wittily scripted “Music of the Spheres” had the Doctor alone in the Tardis, with quill pen, composing music, while listening to the titular music by running the gravitational pulls of planets and universes through the Tardis’s harmony circuit (or something!).

Suddenly the Graske (diminutive Jimmy Vee), with his backward pointy visage, appeared as a warning to the Doctor. Lo and behold, a time hole appeared in the wall of the Tardis and peering through the Doctor saw, guess what? A packed Royal Albert Hall! Beautifully timed to listen for our collective greeting (and paced to encourage us to reply even louder), a bright idea formed – why not get the orchestra play his new music? He pushed the manuscript-leaves through the hole and they explode from the Tardis on the back of the stage, although the resultant minute of music is more like tuning up! While he’s telling us he was at the first-ever Prom (playing the tuba), the Graske escapes through the Hall and runs onto the stage, and only by some Dr Who magic is he whisked back to the Tardis again, before the Doctor enthuses about the music in every single one of us.

As a climax to the first half, Music of the Spheres was about as perfect as could be. Given that it was uniquely written for this Prom, it will have no currency elsewhere and the effort and care that went into producing it (it was filmed on the very last day of the 11-month shoot of the Fourth Series of Dr Who), was much appreciated by all.

Introduced, in the main, by Martha Jones herself – Freema Agyeman – there were also the briefest of appearances by Noel Clarke and Camille Coduri (Rose’s boyfriend and mum, respectively – running from the dalek) and – with the biggest cheer, as not announced in the programme, Catherine Tate (Donna Noble). 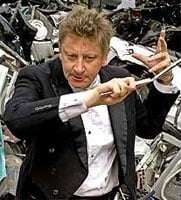 Oh, and the music? Well, the BBC Philharmonic didn’t let the monsters and action faze them. They musicians were on their usual top form, whether conducted by Stephen Bell in the ‘classical’ repertoire or by Ben Foster in Murray Gold’s tremendous Dr Who music, which Foster had also orchestrated. Murray himself joined the band as pianist.

The straight classics were well chosen – Fanfare for the Common Man reflecting the Doctor’s constant championing of the human race; Jupiter from Holst’s The Planets (when the ood silently raised their arms during the “I vow to thee, my country” verses), from which surely every science-fiction score can find its genesis; Wagner’s Ride of the Valkyries, complete with the back four of the horns wearing Viking helmets, and, finally, Prokofiev’s ‘Montagues and Capulets’ (from Romeo and Juliet) reflecting Martha and the Doctor’s sojourn in Elizabethan London, where they met the Bard himself.

Most intriguingly was a UK première – one of the pieces commissioned by Berliner Philharmoniker and Simon Rattle for their Planets project: Mark-Anthony Turnage’s The Torino Scale, played in virtuoso fashion by the BBC Phil, with Turnage in the audience (surrounded by kids) to take the applause.

And while, during Murray Gold’s compositions, the live monsters or the extended edits from the programme were shown (there were at least four large screens round the hall, as well as another set of TV monitors for those in the boxes) might have taken most of the audience’s attention, there can be no doubting the extraordinary skill Gold has in matching sound to vision.

Whether the largely slow and poignant themes for main characters (not only his assistants – Rose, Martha and Donna, but also Astrid Peth – Kylie Minogue, from the last Christmas special – and the Doctor himself), or the dramatic, rhythmic marches that accompany most of the marauding monsters, you cannot now imagine Doctor Who without Gold’s soundtrack. 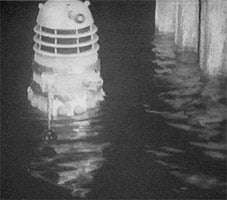 Perhaps what most impressed was the extraordinary editing, across all four series so far in the newly re-imagined Dr Who, to match the music exactly in all its moods and climaxes. That was breathtaking in itself – and we saw not only David Tennant, but also Christopher Eccleston.

Hooray for whoever sat down and imagined exactly how a Dr Who Prom should work; from the Tardis-shaped programme (much bigger inside than it looked on the outside, obviously) to visuals and music. I can’t imagine how it could have been better done. The mood was set from the very opening, with shots of audience members (or blow-up daleks) which had those spotted waving and the audience cheering back. You can’t imagine a better feel-good Prom.

Oddly, before a reprise of Song of Freedom (which accompanied the Tardis dragging earth back into orbit across galaxies after Davros’s recent plot to destroy the whole cosmos), the final scheduled work, Ron Grainer’s original radiophonic studio theme, seemed rather lost with its orchestral overlay, while audience-clapping drowned Tim Phillips’s rendition of Song for Ten that came from the very first Doctor Who Christmas special. Soloist Melanie Pappenheim and the London Philharmonic Choir had a better time, singing mainly vocalise, with great gusto.

Where does this leave Roger Wright for next year – a Casualty Prom (“William Tell” Overture – for once, the arrow might miss the apple, and any amount of operas where a character has been poisoned, or stabbed, like Scarpia in “Tosca”)? Or a Wallace and Gromit Prom? Somebody could compose a Wensleydale Symphony, if an unknown Yorkshire composer hasn’t already. Can’t wait!