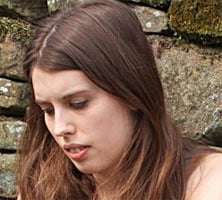 Ringing the changes for the fifth time in as many concerts at the beginning of BBC Proms 2008, Roger Wright made a brief appearance before BBC Radio 3 rejoined the Royal Albert Hall’s folk festivities to remind people about the post-Prom ceilidh at the end of the evening. I hadn’t got to the afternoon Prom that itself was not the start of “Folk Day” (as celebrations had kicked off over in Hyde Park at noon), but soon got into the swing of things with the haunting opening set by folk-singer and -fiddler Bella Hardy.

Just like Martin Simpson who followed, opening his set with “Little Musgrave”, Hardy’s opener “Young Edmond” was about a tragic young lover – in “Young Edmond” two people died, while in “Little Musgrave” he’s caught in his lady’s chamber, much to the annoyance of the lord. Although tragic in tone, the word-setting – breathless with hardly any rests in Simpson’s song – revelled in dotted rhythm. Indeed Hardy’s set seemed clothed in sadness, minor keys and compound rhythms (“Searching for Lambs” in a lilting five beats), each number as exquisite as a Chopin mazurka or polonaise in bringing a nostalgic tinge to the music. “Down in Yon Forest” – slow and mournful – was a homage to Ralph Vaughan Williams (who had collected it), fittingly as his 50th-anniversary was the springboard for “Folk Day”. Hardy’s fellow musicians were Corrin Hewat on the Scottish harp (clarsach) and Chris Sherburn on concertina. 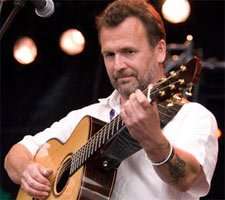 Martin Simpson played solo, accompanying himself on a resonant guitar, with his extended preludes to each song as he tuned (what he liked about classical music was that no-one was ashamed of tuning up!). The elegiac note continued, here in some newer songs as well as traditional ones, about loneliness after being in a relationship (Dick Connette’s “Bachelors Hall” set to the American folk-tune “Pretty Saro”) or a song about his father (born 1899, in a completely different world) – “Never Any Good”. With expressive fingerwork, sometimes including slide-guitar, Simpson reviewed some of the highlights from his most recent compact disc “Prodigal Son”, which won him two BBC Radio 2 Folk Awards – best album and best song (for “Never Any Good”), and both Hardy and he were able to draw the vast space of the Royal Albert Hall inward to meet the intimacy of their individual styles. In this they were aided on being placed in the middle of the Arena, with Prommers and seated audience all around them.

Somehow 25 minutes each seemed woefully short, as did Bellowhead’s set after the interval, on the main stage. Bellowhead is an 11-piece band – four strings, four brass (well, trumpet, trombone, sax and sousaphone – yes, sousaphone), accordion, mandolin and percussion – that has developed a big-band treatment of folk-music which is a real winner. Masterminded by the more-intimate folk duo, fiddler Jon Boden and melodeon/concertina-player John Spiers, the band debuted in 2004 and has already played the Royal Opera House and the Royal Festival Hall. 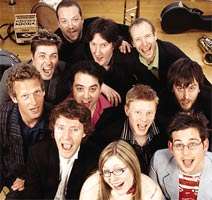 If the first half played to the ‘folk as sad ballad’ school of thought, Bellowhead blew any such cobwebs away and got feet tapping and players dancing. If you’re feeling down just put Bellowhead on, and the sheer enjoyment of the players, let alone the music with its oompah accompaniment will soon put a smile on your face.

Over far too fast, we had a whirlwind tour of some of Bellowhead’s hits from its first album “Burlesque” (the instrumental “Sloe Gin”, “Frogs Feet” and “Dragon’s Teeth” and a cautionary tale about the big city, “London Town”) as well as the opening “Fakenham Fair” (a Norfolk folk tune, collected by Peter Bellamy) and the shanty “Roll Her Down the Bay to Juliana”. By this time the Prommers were pogoing, but with the ceilidh beckoning there was only one encore – one of the tracks from the group’s first EP “E.P.onymous” – “Pickle-Eye Bush”.

Bellowhead is back for “Proms in the Park” and at Koko on 23 October; but for those Folk-fiends (or just for those that now have a taste for it), there’s an all-day celebration at Cecil Sharp House on 4 October, in honour of Vaughan Williams, with other such luminaries as Tim Van Eyken and Jim Moray (evening). And there’s always the hope that Folk will become a regular feature of the Proms seasons.