The Hallé’s programme presented two composers who, as the programme note pointed out, were like chalk and cheese – wild, impulsive Berlioz; thoroughly schooled, restrained romantic Mendelssohn – and Sir Mark Elder’s conducting pointed up the difference very well. For Berlioz the sound he produced from the Hallé was somewhere between the opulence favoured by Colin Davis and the leaner, more ‘period’ style of John Eliot Gardiner, and there was an element of bombast and swagger that suited ideally the Overture to “Benvenuto Cellini”. For those who worship the genius of Berlioz with reservations, this particular piece benefits from being driven hard, and there was enough raw power in the playing to make it sound convincing and to achieve, just, an echt-Berlioz frisson.

In “La mort de Cléopâtre”, Elder’s acute ear for style and detail and his masterly sense of overview was pitched just right for a singer to express the Egyptian queen’s extravagant drama of shame, recrimination and grief. But that singer was not Susan Graham. 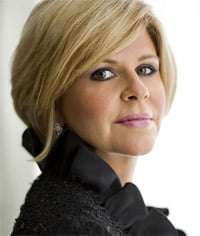 The American mezzo has achieved diva-status, a shimmering presence with a voice of effortless control and sumptuous colour, but any suggestion of abandon was too carefully prepared. She was of the music rather than in it, and it rather diluted the effect of the score’s psychological acuity, so vividly realised by Elder and his players.

Mendelssohn’s choral Symphony No. 2 (“Hymn of Praise!) was last performed at the Proms in 1969, and before that as far back as 1900. If you take the Proms as an indicator of musical taste, it’s not hard to imagine this celebration of a vital German contribution to civilisation (it was written to mark the 400th-anniversary of Gutenberg‘s invention of the movable-type printing press) acquiring many a layer of high-Victorian piety via choral societies up and down the land. But then Mendelssohn’s god-like popularity with the musical English waned, and the specifically German sentiments of this symphony were unlikely to thrive through two world wars.

Elder’s approach veered towards a lithe, light, almost ‘period’-orchestra sound, with transparent textures and upbeat attack, and there was similarly athletic singing from the Hallé Choir and Hallé Youth Choir, making light work of the Bachian fugal passages in the long choral finale. The result was vivid and fresh, and triumphantly returned the work to its original vision of the dispersal of ignorance through culture. The episodic finale sagged a bit in the slower sections, although the choirs and soprano soloist pulled out the stops for a thrilling ‘Die Nacht ist vergangen’, and the opening, instrumental sinfonia (first movement, scherzo and adagio) had that edgy energy and sense of purpose that characterises the best of Mendelssohn’s music, with a ‘valse triste’-like scherzo that Tchaikovsky would not have disowned, Sally Matthews and Sarah Castle were radiant soloists, and tenor Steve Davislim’s light, forthright tenor made a very attractive contribution.