On its traditional mid-Prom-season Saturday evening and (also traditionally) shown on BBC2 Television (at a later time, so why this concert actually had to start at 6.30 p.m. was a mystery – unless, billed as a Family Event, it was perhaps thought youngsters in the audience would benefit from an early end) and with the usual arcane staging, where the double basses seem to enter before the audience and can’t leave until the audience has departed: yes this was the annual National Youth Orchestra of Great Britain Prom.

Why, after 60 years, the members of the National Youth Orchestra, unbelievably gifted children, are not allowed to take their places like the musicians of any other orchestra, I really don’t know. I do know from orchestral courses I attended when their age that there is a tendency for spontaneous shenanigans, but have I never witnessed such antics before the all-important final concert that you’ve all been working up to. Quite frankly, I find this enforced section-by-section entry to be unnecessarily “nannying” (in the current parlance). I wish organisers would respect their players; after all, this is an organisation that wants to give its charges a taste of what it is like to be in a real orchestra!

OK – rant over. Certainly, when neatly arranged on the platform and fully tuned, the young players were as disciplined as the greatest orchestras. Apart from me completely missing the Lion’s Roar (both visually and aurally) near the beginning of the opening work, the Revised Version of Varèse’s Amériques, Antonio Pappano conducted a controlled and clear performance of this score that builds and finally bursts with huge swathes of power.

Starting on solo alto flute (shades of Debussy’s Prélude à l’après-midi d’un faune and developing with Rite of Spring-like rhythmic impulses. Varèse creates his own vision of the exotic New World in which he found himself after escaping First World War-torn Europe, all his earlier works having been destroyed.

While the debt to Debussy, Stravinsky and others is plain, Amériques perhaps shares most with Charles Ives, with the seemingly random assemblage of phrases and distant sounds to create the sound-picture, although surely Varèse couldn’t have known Ives’s music at the time. Pappano was able to build the orchestral textures extraordinarily clearly and, with 165 players at his disposal, he was guaranteed some shattering volume when needed.

It is interesting to note that the National Youth Orchestra has played one of only two other performances of Amériques at the Proms, back on 10 August 1996, with Paul Daniel conducting. There again there was astute programming, with Gershwin scores to enhance the American connection and The Rite of Spring. All three times at the Proms we’ve heard the Revised Version of the score; although perhaps with the National Youth Orchestra’s personnel we could have had the Original Version – longer and for an even larger orchestra –, complete with Ivesian off-stage bands, a version which may never have been heard in Britain, and surely perfect Proms programming.

Continuing this concert’s American theme, the first half ended with another work written ‘in exile’ – Rachmaninov’s Fourth and least-known piano concerto, which was also – like the Varèse – heard in its Revised Version. 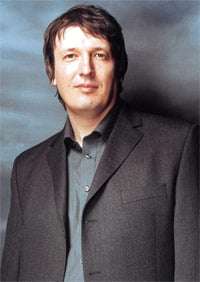 With a vastly pared down orchestra (it seemed that a normal orchestra’s worth of players vacated the platform, leaving a normal orchestra!) backing Boris Berezovsky, Pappano directed a performance as winning as you are ever likely to get. Again he impressed with the build-up of climaxes and his way of allowing the tension to suddenly evaporate for another delightful pianistic figure. You got the impression they were enjoying themselves.

After the interval, the stage completely full again, we heard an echt-American work, although one by a composer – Aaron Copland – whose musical education had benefited from his time in Europe, specifically in Paris with Nadia Boulanger. In his Third Symphony, Copland carved out what we might accept as distinctly American music; simple in some senses (the very opening wind chorale with its open harmonies), but also grand, especially in the use of his already-penned Fanfare for the Common Man.

This seems to be only the fifth Proms performance of the work, and was certainly fuller-bodied than last year’s by Marin Alsop and the Bournemouth Symphony. A shade insecure in the hectically-fast second movement notwithstanding, the young players rose to this Proms occasion with aplomb and Pappano allowed full reign to the work, which resounded around the Hall’s rotunda in splendid and thrilling fashion. There was some exquisite solo playing, led by oboist Melanie Rothman (but by no means exclusive to her), and – for once drilling being essential – Pappano got individual players and then sections to stand for their quite, unreservedly, deserving acclamation.