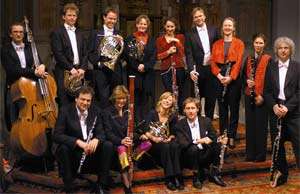 Obviously one of the best kept secrets of the whole Proms season, given the smallest audience so far this year in the Royal Albert Hall, the Netherlands Wind Ensemble arrived in Kensington for this late-night celebration of the 70th-birthday of the founder of the Hague School – Louis Andriessen, the centrepiece of which was perhaps his most famous work, De Staat, based on Plato.

Flanking De Staat were works by two of Andriessen’s pupils. First, Steve Martland (50 this year) and, finally, Andriessen’s compatriot, Cornelis de Bondt. Both Martland’s Beat the Retreat, composed to a BBC commission in 1995 ostensibly to commemorate the 300th-anniversary of Purcell’s death, and Andriessen’s De Staat, have politics at their heart, while de Bondt’s Doors Closed – the second part of his four-part Het Gebroken Oor (The Broken Ear) – is more concerned with the end of tonality and the start of atonality, although there’s a connection with the Martland in its use of Purcell (as well as Beethoven).

Despite their common ancestry, each piece has its own distinct soundworld. Martland’s political intent was a stand against the then (Conservative government) Criminal Justice Bill which banned attending clubs and outdoor dances – anywhere with ‘repetitive beats’ – and his title is counterintuitive as the original ‘beat the retreat’ was the call for revelling troops to return to barracks, though Martland wanted to encourage people to stay and party. As the only nod to the purpose of the commission, he used a bass line from Purcell, but he overlays it with various modern-dance rhythms (unusually, though, including some triple-beat ones, unlike most modern ‘popular’ music that only seems to be in 4/4). For a handful of players (trumpet, trombone, three saxophones, percussion, piano, electric and bass guitars) this is an ever-changing kaleidoscope of dance possibilities, engaging and – especially compared to the heavyweights to come – light-footed.

Andriessen returned to the Proms following the UK première of The Hague Hacking. I remarked then how uncharacteristic for Andriessen (for which read ‘subtle’) The Hague Hacking is, but for Die Staat we returned to his trademark pumping, scored for four female voices, four oboes, four trumpets, four trombones, four violas; then to electric guitars, bass guitar, two pianos and two harps (well, four hands in both the two latter cases!). It’s a big canvas, complete with typical hocketing (throwing the melody note by note around the ensemble) as well as playing in canon, together with excerpts of Plato given in phonetic Greek. It only achieves homophony at the end. The Netherlands Wind Ensemble (expanded to include some strings, keyboards, percussion and voices – the latter, standing in height order) has this music in its blood. Lucas Vis conducted with quiet authority. Like the Martland, Andriessen’s political intent is rather counterintuitive – his inspiration was Plato’s argument that music can be dangerous, setting words from “The Republic”. Of course, what Plato really meant was that the effects of music could be dangerous (not music itself), but Andriessen rather wishes that music can be revolutionary…

Completing the consecutive decades of music by filling in the gap of the 1980s, between De Staat (1972-1976) and Beat the Retreat (1995), was de Bondt’s Door Closed from 1984. Despite the avowed use of the Funeral March from Beethoven’s ‘Eroica’ Symphony and Purcell’s ‘When I am laid in earth’ from “Dido and Aeneas” – obviously sounding the death-knell of tonality in his wider scheme – the massed ranks of by far the largest group of players needed for this concert reminded of Berlioz’s Symphonie funèbre et triomphale. Requiring two conductors (sharing one podium), and created with the help of a sound-crunching computer program, there was an additional timbre in this performance that de Bondt had not allowed for – that of a score falling off its stand!

All three composers were on hand to take bows and the amplified sound was very good. One nice touch was that the members of the Netherlands Wind Ensemble when not required to play sat on the risers at the back of the stage, watching their colleagues. It’s good to know that music matters to them: Andriessen, de Bondt and Martland – even Plato – must have been pleased!