The origins of Mozart’s ‘Haffner’ Symphony date from 1782, begun by a commission from the Haffner family to celebrate the ennoblement of Sigmund Haffner. In 1776 Mozart had written a serenade for the wedding of Marie Elizabeth Haffner, so it’s perhaps not surprising that he wrote another serenade for Sigmund. Whether or not he completed the work in time, later in 1782 Mozart revisited the serenade and re-worked it into a symphony. Unfortunately, under Isabelle van Keulen’s directorship, we were given a less than satisfying account, full of energy, yes, but lacking character, emotion and depth.

Bent Sørensen’s La mattina (The morning), his second piano concerto, was commissioned by the Norwegian Chamber Orchestra, and is dedicated to Leif Ove Andsnes whose playing of Busoni’s transcription of Bach’s chorale ‘Ich ruf’ zu dir, Herr Jesu Christ’ one evening at a piano-bar in Vienna had inspired the composer to write a concerto, which he started the next morning, hence the title. 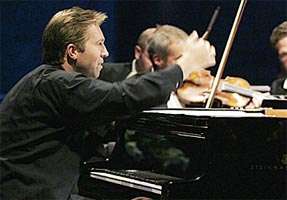 It is a sombre piece, intricate and at times enjoyably lyrical, particularly as dawn begins to break but unfortunately, despite the efforts of Per Kristian Skalstad, the orchestra seemed to lack the subtlety needed for such an imaginative work, the claves were jarring, and the violins were simply too strident. The performance was rescued by the intense, fluent playing of Andsnes, blowing the clouds away and letting light in. Bouts of coughing, particularly in the quieter moments, were not helpful when the piece demanded intense concentration.

The second half opened with Grieg’s Holberg Suite. Ludvig Holberg (1684-1754) was a Norwegian-born writer and philosopher who, after travelling extensively in Europe, settled in Copenhagen. Keen to celebrate his bicentenary the Norwegians commissioned Greig to compose a cantata to be sung outdoors at the unveiling of a statue to Holberg in Bergen’s main square. For whatever reason the cantata was never completed but left with a five-movement piano suite that was made into a string-orchestra piece.

The orchestra’s return seemed to catch the audience and staff unawares when the violinists, cellists and double bassists already seated, wandered on, grouped themselves into a circle and started playing whilst still standing. Given that the much of the audience was still making its way back there was much confusion, banging and general noise. Still the approach bode well and the orchestra’s relaxed style seemed of greater affinity for Grieg, but it was not the case.

Although it impressed to see the musicians playing without music and displaying rather more joie de vivre, which drew some muted and embarrassing applause at the end of the first movement, they still failed to inspire. The delicate textures of Grieg do not lend themselves easily to such an informal grouping, the natural interplay between first and second violins somewhat lost in the mêlée – the sheer size of the Royal Albert Hall does not help either.

Mozart’s Piano Concerto No.24, one of only two he composed in a minor key, is one of his greatest works. Andsnes displayed sublime deftness of touch, slipping easily between the playing the keyboard and directing, the orchestra giving a far more polished performance, playing with feeling. It’s a thoughtful piece, quite melancholic at times, particularly in the first movement; and although the Larghetto, with its coda lifting the mood, the final Allegretto leaves us in no doubt as to the troubled state of the composer’s mind. This fine performance rescued a somewhat lacklustre Prom, the finale of the E flat Piano Concerto (K449) being offered as a lively encore.