One of the strangest Proms programmes in a long while, this three-part concert attempted to trace musical and cultural connections between East and West and between France and Spain. The half-Japanese, half-German Jun Märkl was the conductor. 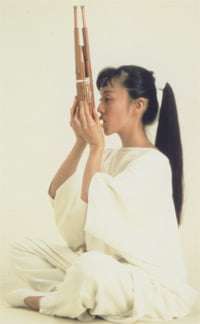 Opening with music by Toru Takemitsu, Ceremonial makes use of traditional Western harmonies and orchestration and in some ways is reminiscent of Copland’s Quiet City in its muted tone and haunted atmosphere, the solo trumpet of that piece replaced by the Japanese shō, an instrument with miniature, vertically stacked pipes attached to a mouthpiece and blown. The resulting sound is somewhere between an organ and a harmonica. Mayumi Miyata produced a beautifully clear tone, ably supported by the delicately light strings of the Lyon Orchestra. Oboes and flutes stationed around the Hall echoing the string parts to add a rich, intoxicating atmosphere.

‘Pagodes’ from Debussy’s piano triptych Estampes is thought to have been influenced by the music he heard on Java in 1889. André Caplet’s orchestration loses a little of the mystery of this beguiling section but Märkl coaxed some suitably delicate textures. Ravel’s Rapsodie espagnole, the first Spanish-influenced French work showed the Lyon Orchestra revelling in the sensuous atmosphere of ‘Prélude à la nuit’. There was some ravishing string tone elsewhere, but the rhythmically orientated movements suffered from a lack of precision and were somewhat uninvolving.

The inspiration of Debussy was most evident in Takemitsu’s Green, earlier and even more western-orientated than Ceremonial, written, as the composer wrote, “from a wish to enter into the secrets of Debussy’s music”, the cool orchestral textures sounded creating a dreamscape. Two violin showpieces followed. On paper just too much of a good thing and a great disappointment. Akiko Suwanai is a superb violinist but here seemed ill-at-ease with the gypsy-flavoured rhythms of both pieces. Carmen Fantasy sounded lacklustre and uncertain, and Ravel’s Tzigane was similarly afflicted by a lack of conviction and the feeling that Suwanai was just not comfortable with the heavily-accented melodies.

Toshio Hosokawa’s 20-minute Cloud and Light brought back Mayumi Miyata for music that depicts the sounds of nature. Accompanied by an orchestra minus the woodwind section, Miyata’s purity of tone and crystalline playing was the highlight of a static yet shifting texture of sounds reflecting the observation of passing clouds. And finally … La Mer, with many good things in the performance. Attention to detail and string tone were especially fine, and balances were good throughout but there was little feeling of the elemental power of the sea itself; a little safe, a little bland.

The encore (if one was needed) was a rushed account of the ‘Prelude’ to Bizet’s “Carmen”.