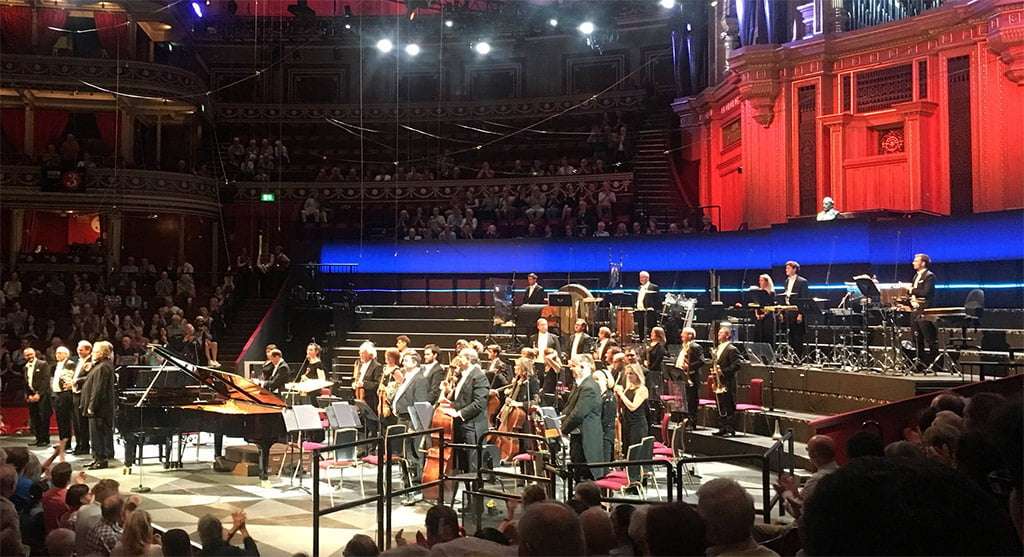 Continuing this year’s Proms theme of space exploration on the fiftieth-anniversary of the first Moon Landings, Sakari Oramo and the BBC Symphony Orchestra took up Olivier Messiaen’s expansive cycle Des canyons aux étoiles … (1971-4). As a spiritual meditation that leads up from the sublime landscapes of Utah, to the empyrean realm of the stars, its succession of a dozen movements is often the occasion for performers to wallow in slow, mystical fervour.

The alacrity of Oramo’s interpretation, however, remained more closely rooted to the colours, textures and sounds of this World in its taut, dramatic progression through each movement, and in its rhythmical vitality. Martin Owen’s solo on the horn paralleled by the woodwind and brass chorale near the end, provided a solemn and arresting frame within which Messiaen’s diverse musical elements were deftly laid out over the course of ninety minutes or so (no longer than the DG recording by Myung-Whun Chung, but on balance Oramo’s reading certainly seemed brisker, and also less lost in awe than the last performance at the Proms, with George Benjamin and Ensemble Modern, in 2004).

The first movement (‘The Desert’) seemed disjointed initially, but it came together under Oramo’s direction as a steady process, allowing each step to unfold as though emptying the soul in the vacant space of the desert wilderness to make it ready for contemplation of the divine, as Messiaen indicates in the quotation from the French theologian Ernest Hello.

Thereafter, distinctively-drawn instrumental colours tended to keep the music within the bounds of the bodily senses, rather than vanishing into abstraction, with some vivid sonorities from the wind-machine, bowed crotales, piccolo, and violin harmonics to denote the lone whistling of the wind in the desert; and Messiaen’s invented ‘geophone’ to imitate the sound of sand passing over the landscape. Nicolas Hodges executed the passages for piano with sensitive contrast between the bigger, chordal sequences of music and the more intricate, contrapuntal warbling of the various birds the composer brings into prominence, especially during the long fourth and ninth movements for that instrument alone, in which the birdsongs at different registers of the keyboard came through particularly warmly. It was a telling gesture, too, that those latter movements came not as drawn-out digressions, but welded on as a continuation of the orchestral movements which preceded them, so as to comprise a more organic part of the structure of Messiaen’s score.

More narrative urgency came from the brass and woodwind chorales, marking a welcome increase in tension for the ominous ‘What was written in the stars…’ (referring to the mysterious letters which appeared at Belshazzar’s feast) and even more so for the seventh movement, ‘Bryce Canyon and the Red-Orange Rocks’, which rose to form the searing climax of the work on this occasion, with the excitable course of the music arising from the strings’ strident chords and the percussion’s clattering sounds. That was not repeated for the work’s final movement which came to rest on the more sober major-key sonorities of the strings, after a more-measured battle to secure that moment of resolution.

Along the way, mention should also be made of Owen’s virtuosic solo that constitutes the sixth movement, ‘Interstellar Call’, which he brought to life effortlessly with a dance-like pulse, as something more than just an impressive exercise in unusual effects and techniques; and also the fine blend of timbres among the different instrumental sections for the quietly ecstatic ‘The Resurrected and the Song of Aldebran’, whose soft A-major hues (conjuring serene blue for the synaesthetic Messiaen) and glinting points of percussive sound put me in mind of Van Gogh’s Starry Night Over the Rhône, currently on display at Tate Britain’s exhibition of that artist.

If the performance overall somewhat skated over the sense of Messiaen the devout and mystical Roman Catholic, it certainly conveyed much of what Messiaen the composer is about – one of the most visionary and imaginative of the twentieth-century.