“Now in its third year, BBC Radio 3’s World Routes Academy mentoring project turns to Latin America. Born in London of Colombian descent, 2012’s young apprentice is self-taught 20-year-old accordionist, singer and guitarist José Hernando Arias Noguera. His mentor, the renowned Bogotá-based accordion king Egidio Cuadrado – who brings his own band – is probably best known for his collaborations with Carlos Vives, the Latin American superstar actor-turned-singer. Fusing the folk tradition of vallenato with elements of rock and pop has proved a game-changer for music now enjoyed all over the Spanish-speaking world and beyond.” [BBC proms website] 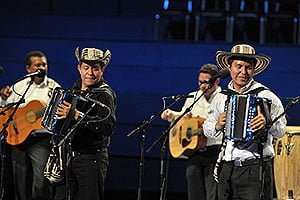 From ancient Babylon to infectious Colombian accordion rhythms in just an hour – it’s the volt face that the Proms revels in; the only reason it took an hour was the stage had to be cleared after Belshazzar’s Feast, to be replaced by a modest assembly of chairs and instruments – drums (caja) and three guitars, and a table with maracas and a long, vertically held flute (the gaita or koguis), played by Matye Montero in her iridescent, bird-like costume.

First on was the young Londoner José Hernando Arias Noguera, who is this year’s World Routes Academy apprentice, a self-taught accordionist in the traditional Colombian vallenato style (“born in the valley”), from North East Colombia. With a technique finessed via YouTube, his apprenticeship mentored him with our second main artist, the former Rey Vallenato (“king of the vallenato”), Egido Cuadrado. The result? Noguera’s entering the annual Vallenato Festival in Valledupar, Colombia this April, where Cuadrado had won his title in 1985 and singer Carlos Mario Zabaleta had won “King of the Vallenato singer” last year. Noguera got into the quarter-finals and caused something of a stir being the first from England in the competition. He even broke tradition in singing one of the two songs Cuadrado had written for him in both Spanish and English (with the appropriate refrain for a Prom: “to the BBC in London, I would never let them down”). 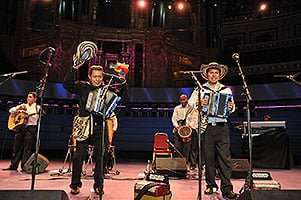 From obscurity to world fame in barely six months – such buzz brought out a sizeable portion of the Colombian ex-pat population. They quickly realised their error of buying seats, as there was a constant stream moving down into the Arena to fill the space with dancing. This was a Prom like no other.I’m no expert, indeed I’m a complete novice at the genre, but there was never a suggestion that we were not hearing the very best. The Colombians in the audience were having a ball, singing along to every song. All were characterised with an overriding lilt, with fast-fingered button-key work on the accordion (of which Cuadrado and Noguera shared four), and an ever-present percussive pulse, heightened by Mayte Montero’s vertically motivated maracas – the songs came thick, fast and uninterrupted. The only respite from insistent rhythm was the first encore, a nod to British music in a slower, but equally infectious, version of The Beatles’ “Hey Jude” (or as sung here, ‘Hey Yude’).

A motto for the genre could be “Music without a singer is like a house without a woman”, which allows me to end with not just praise for mentor Cuadrado and mentee Noguera, but also singers Zabaleta and, moving once off percussion and gaita, Montero. I might not have understood the words in general, but it’s clear the tales of the likes of ‘The Painkiller’, ‘Deep Wound’, ‘The Cold Sweat’ and ‘The Vallenato Fighting Cock’ – about the rivalries in the Vallenato Festival – were typical songs of love, loss and jealousy, with repeated refrains and infectious melodies. If only I could dance like the Colombians…