“Remember such time-honoured favourites as ‘We’ll gather lilacs’? Tonight we acknowledge that patriotic First World War plea to ‘keep the home fires burning’ in a tribute to a silent-movie actor, West End playwright, composer and star of a string of stage musicals hugely popular in their day. Ivor Novello, the most consistently successful composer of British musicals before the advent of Andrew Lloyd Webber, nowadays tends to be unjustly neglected. Sir Mark Elder is a committed advocate, as is tonight’s master of ceremonies, Simon Callow.” [BBC Proms website] 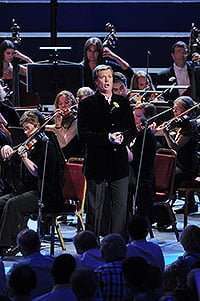 One thing that this late-night Prom proved was how easy it is to forget what the British once expected from a musical, before America started ruling the roost with shows such as Carousel or Oklahoma!, leading us on to the worldly-wise/weary creations of Sondheim. But here we were, for one night only, in a Royal Albert Hall respectably full of predominantly no-longer-young folk, wrapping ourselves in the luxuriant fantasy of Ivor Novello’s music.

Film star, actor and composer, Ivor Novello defined a period – Twenties to post-Second World War, riven with war and depression – of impossible glamour and romance, set off by his equally impossible good looks (not for nothing was the young pin-up Novello described as the “English Valentino” – although he was Welsh). His life was lived in and for the theatre, and was fuelled by what’s now described as a champagne life-style. Novello gave his audiences Ruritanian royalty falling in love with the wrong people, love-affairs that trembled with hope against the odds, more glamour and yet more extravagance, and his followers lapped it up. 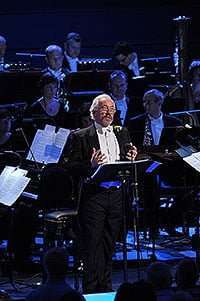 The important thing about Mark Elder’s approach – through the Hallé, singers Sophie Bevan and Toby Spence and narrator Simon Callow – was that he took the music at face-value, ensuring that all those romantic songs turned, as Novello himself was always doing, their best profile to us. Songs such as ’My life belongs to you’ (from The Dancing Years), ’Someday my heart will awake’ (from King‘s Rhapsody), and the wonderful ’Pray for me’ really hit the spot, but their affection and sweetness never cloy or outstay their welcome. They pick you up, charm you with the unexpected depth of possibilities, then put you down, enhanced and, briefly, all the better for it. What composer could ask for more? It’s an amazingly addictive and emotional sleight of hand, and Elder made the dreams live with unaffected directness. He led the Hallé through all those beguiling, close-contact waltzes, and the orchestra let the gorgeous string tunes surge with a decent, polite directness. They swooned, but not a hair was out of place. 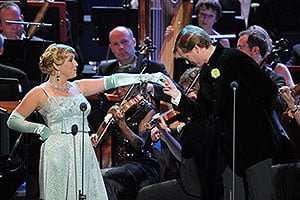 Sophie Bevan conjured up an aura of chic, crystalline sophistication and scored a melting bull’s-eye with ‘My dearest dear’ (The Dancing Years), sung with unmannered intimacy, and she gave ’The violin began to play’ (The King‘s Rhapsody) an appropriate Straussian heft – she really made these songs sing. Toby Spence was on good form after his recent illness. The sexy baritone zone of his voice sounded as lovely and suggestive as ever, and the passion in his high voice was hair-raisingly powerful, compounded by his elegant, lounge-lizard presence. Inevitably, he was a heart-breaker in ’Pray for me’, Novello’s last song, sung meditatively with a stylishly rhapsodising piano accompaniment.

Simon Callow’s narration was full of actor-laddie resonance. He covered all the salient points of Novello’s life, including his mother, a woman with whom you did not mess, and his brief spell in Wormwood Scrubs. Material on his lyricist would have been welcome, as would a leavening of the predominant mood of wistful longing. All the same, this short concert reminded you of Novello’s instantly identifiable, lilac-gathering genius, and kept this master’s home-fire burning with genuine affection.