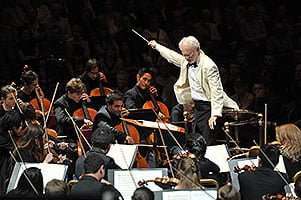 After the exigencies of the opening weekend – the English first night, then major stage-works in My Fair Lady and Pelléas et Mélisande – Prom 4 fulfilled the traditional mix (if only of 20th-century invention) of overture-concerto-symphony. Indeed a couple of Proms traditions had their first outing too – the Arena’s “heave” answered by the Gallery’s “ho” as the piano lid was raised and the polite applause for the tuning ‘A’. Of course, being the Proms, things weren’t quite what they might have seemed, as it wasn’t really an overture, or really a symphony…

Bringing back the hands-across-the-Atlantic pairing of students from New York’s Julliard School and London’s Royal Academy of Music (who had first appeared together in 2005 under Sir Colin Davis), the opener was only the second Proms performance of Respighi’s Feste Romane, the final part of his ‘Roman Triptych’, which took decades to arrive at the Proms in 2009 (serendipitously the year City Noir was composed and unveiled at Gustavo Dudamel’s inaugural concert as music director of the LA Phil). So, the concert was bookended by two orchestral evocations of vibrant cities from the old and new world. 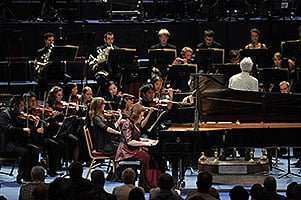 The centrepiece was Ravel’s Piano Concerto in G – which you could argue is a musical portrait of Paris until you read that Ravel thought of the opening movement’s first theme on a train between Oxford and London (Slough, perhaps) or hear in the later harp solo a distinct reminder of the Westminster chimes – so perhaps we shouldn’t overstress a geographical and urban link! Imogen Cooper, in fetching burnished red fish-tail jacket and long skirt, stepped out of her regular classical repertoire to give a decent, rather than inspirational performance, sometimes overpowering the much-reduced orchestra.

Much more exciting was the opening Roman Festivals – the orgiastic ‘Circus’, the swelling pilgrim ‘Jubilee’, the bustling ‘October Festival’ and the final ‘Epiphany’ with its Petrushka-like evocations of a street fair – offering a platform for some virtuosic solos and great ensemble playing from the bipartite orchestra. John Adams – belying his 65 years in dapper white tuxedo – might not strike one as a natural conductor, but he seems a very clear one, encouraging his young charges to attack Respighi’s infernally memorable melodies with great sweep. It would be invidious to name individual soloist (especially as the chap on the mandolin was not listed in the programme), but this could easily have closed the concert. As a starter it was exhilarating. 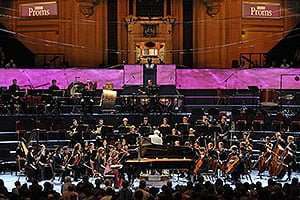 So to City Noir, which might equally be entitled City Technicolor. John Adams’s evocation of Los Angeles (where he currently holds the position of ‘Creative Chair’ at the LA Phil) stems from not only the film noir classics of 1940s’ and 50s’ Hollywood, but also his reading of Kevin Starr’s books, including Embattled Dreams from which he quotes the idea of the city “as a source of inexhaustible sensual experience.”

Typically his movement titles are very descriptive – ‘The City and its Double’, ‘The Song is You’ and ‘Boulevard Night’ – and his music is a world away from the minimalist school with whom he seems indelibly associated. Surely Adams’s music is ‘maximalist’ – yes, he utilises motoring rhythms, but he has Martinů’s skill at composing continually shifting soundworlds, and Respighi’s knack of orchestral colouring, complete with, here, a Honegger-like Pacific 231 impression of slowly accelerating massive chords in the final movement as if one of those immensely long American freight trains is running through the heart of the city.

Adams’s score teams with atmospheric incident, so easy to imagine what it might accompany. Here special mention can be made of alto saxophonist Patrick Posey (Julliard) who stood for his two languorous solos, the epitome of laid-back nocturnal West Coast jazz. City Noir might not be symphonic in conception but it is certainly an enjoyable 30-plus minutes of music.