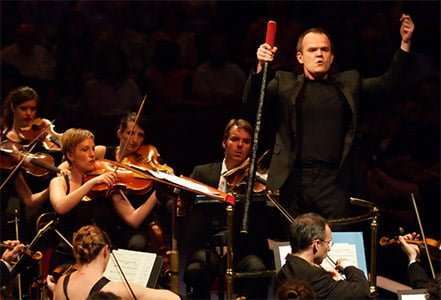 An instrument for every occasion! On Bastille Day, Les Siècles (a French orchestra with its French founder-conductor) brought along various such apparatuses from different centuries to match the music that its members were playing, culminating with The Rite of Spring, not only with the ‘right’ instruments, similar to those that informed the premiere in Paris in 1913, but also with François-Xavier Roth’s forensic examination of Stravinsky’s original manuscript and contemporaneous two-piano version, compared with subsequent revisions, and taking us back to what the divided-in-opinion first-night audience heard on 29 May in the Théâtre des Champs-Élysées.

The Baroque part of the concert included music by Jean-Baptiste Lully (1632-87). Roth recreated Lully’s banging a cane on the floor to keep time; thankfully he didn’t replicate the composer’s fatal stabbing of his toe! Les Siècles (woodwinds standing) gave us some vital music-making, with pizzazz, and also style and unanimity, with some tinkling and skin percussion for added value. At the opening of ‘Cérémonie pour les Turcs’ (the finale), the darkness of lower strings and bassoons really caught the ear. The dances by Rameau (1683-1764) proved more elegant and sweeter-sounding; the lyricism and exuberance was infectious. 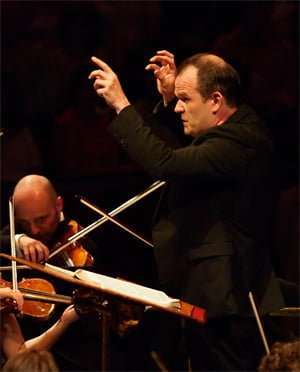 With a change of string instruments, and bows, it was then to later, Romantic, scores and two masters of their craft. The snippets from Léo Delibes’s Coppélia ballet (1870) proved quite delightful with the varied and noticeably different instrumental sounds, pertinent to this period of French composition; so warm and well-balanced; not a strident note. The ‘Waltz’ and ‘Mazurka’ both had swing, and good to see a distinction made between pairs of cornets and pairs of trumpets. The ballet music from Jules Massenet’s opera Le Cid (1885) is a gem (a shame we were denied all of it, though). This was a perfectly judged and affectionate account, full of life and detail, on a par with Jean Martinon’s marvellous Decca recording with the Israel Philharmonic (and there is no higher compliment).

And so to The Rite of Spring. It was the same … but different; the score was immediately revised after the first night, Stravinsky handing changes to conductor Pierre Monteux for the second. And we got a bassoon similar to that in use at the premiere; thus the opening solo had a nuttier hue; beautifully played, too. And from there followed numerous subtleties of detailing and dynamics that sounded afresh, novel, the occasional extra bar, the odd rhythmic dislocation. But it was also the superb playing that counted for much; this is an orchestra of great players who bring notable musicianship, virtuosity and deep-seated commitment to everything they do. So too these particular instruments, more colourful than their modern counterparts; less blatant, with greater character; brass that doesn’t blare or dominate (trombones spicy rather than harsh) and a bass drum that cracks rather than thumps, and it was also a notable addition, often off the beat, in the music leading up to the final ‘Sacrificial Dance’, itself with fascinating aspects that Stravinsky deleted, such as a cymbal clash on the final chord. With nothing forced or gratuitous, made for dancing, but remaining Russian and ritualistic, this was a thrilling and revelatory Rite, one for all seasons.