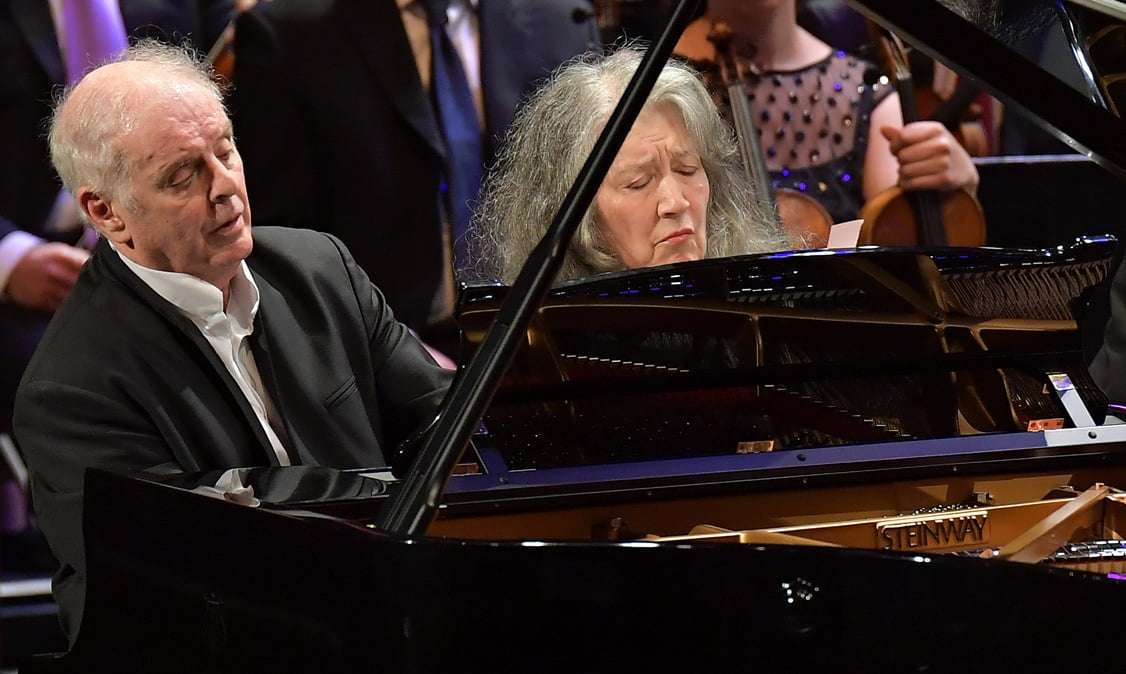 The Royal Albert Hall was packed on one of the hottest days of the year and it was a full house in other ways too. Daniel Barenboim’s health may or may not have been below par but this is one superstar who never cancels and, although Martha Argerich had pulled out of the Salzburg leg of the West-Eastern Divan Orchestra’s current summer tour (Barenboim playing a Mozart Concerto instead), this London date went off as planned. Argerich had plenty of hankies. As for the audience, whistling hearing aids were much in evidence – the septuagenarian pianist commands a loyal, long-term following. Other, younger attendees, drawn to the show as to a right-on circus, were less well-behaved. Many didn’t really know how to listen, slammed doors and chatted.

The first half was musically less compelling. Making a return appearance at the Proms in a revised version of 2013, Jörg Widmann’s Con brio made no particular sense as an opener. It was commissioned by the Bavarian Radio Symphony Orchestra for the opening of its 2008/09 season, expressly designed to complement Beethoven’s Seventh and Eighth Symphonies, then also on the bill. Forget developmental high seriousness and positive outcomes. Here, once again, was a scatty deconstruction peppered with advanced playing techniques and funny noises. It’s playful fun for the timpanist if less so for the audience. A promising locomotive element is never allowed to get going, tiny pockets of Bergian lyricism even less so. Shards of Beethoven came and went. Paul Griffiths’s programme note tried to make something of it and the performance had a certain éclat but there is no substance in the piece. 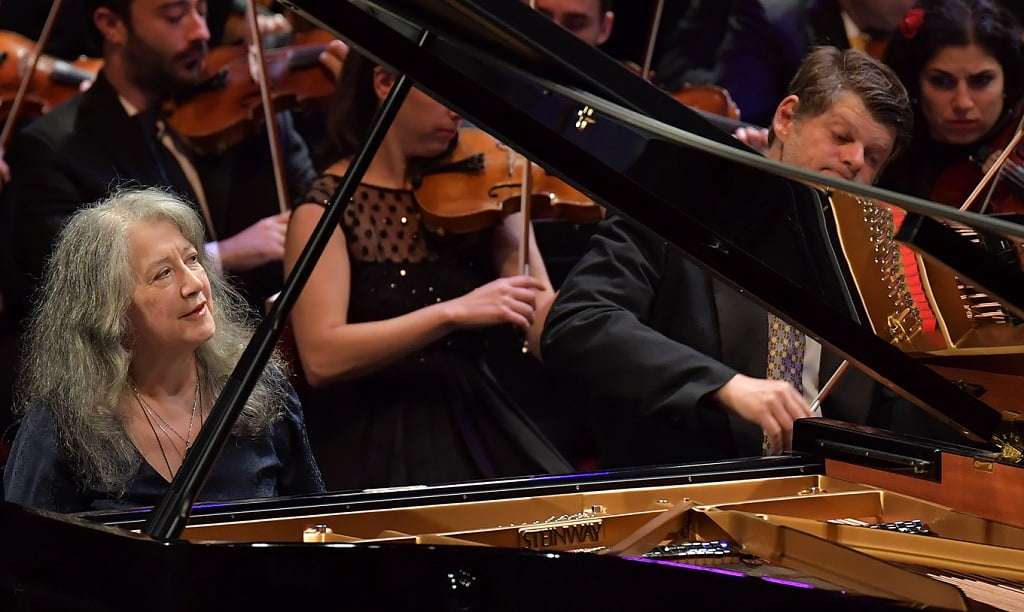 Liszt’s First Piano Concerto has also been condemned as threadbare and empty and it stands or falls as a vehicle for pianistic display. Argerich was never likely to disappoint there. She made her famous recording in the late-1960s with Claudio Abbado and it was something of a surprise to find her recreating its torrential power almost half a century later. Her trademark jerky rubato and tendency to dart forward impetuously are not unalloyed positives but who could now hope to emulate the grand, explosive manner at the start or the deft and witty articulation in the scherzo-like music, that wretched triangle almost tolerable in context. In the Quasi Adagio section Barenboim gave Argerich plenty of expressive elbow room.

The encore was Schubert’s Rondo in A, D951, a low-key party piece that Barenboim and Argerich also played when they toured Beethoven’s First Piano Concerto with the Berlin Staatskapelle last year. Argerich plays secondo with Barenboim on primo. In music that responds best to a certain artlessness and consistent beauty of tone, the pair are arguably miscast though the reading has its moments and seeing them squashed together in the intimacy of a piano duet brings out the groupie in us all. 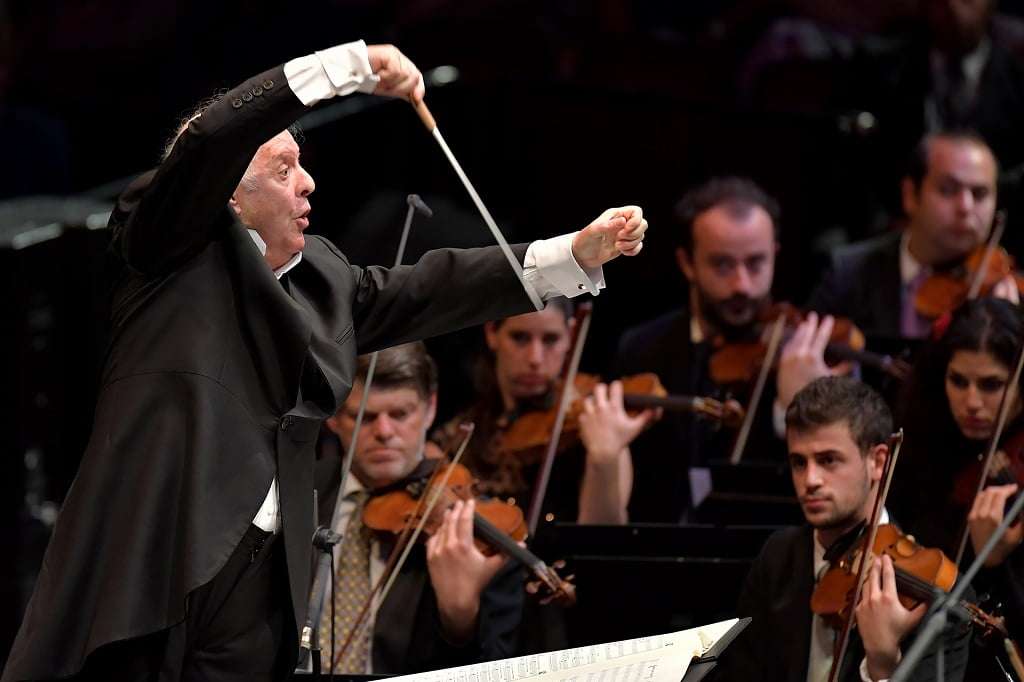 Barenboim is not always the tidiest of pianists and his WEDO cannot be expected to be the sleekest of ensembles – bringing together musicians from both sides of the Israeli-Palestinian divide is remarkable enough. That said, Barenboim might just be the most distinguished Wagner conductor we have and it was a privilege to hear him draw appropriately dark and claustrophobic sounds from his band after the interval. The strings were surprisingly smooth, the woodwinds ‘woody’ and special. There was no hint of bombast or exaggeration in an old-fashioned melange of orchestral favourites that could scarcely have been more appropriate.

It was after all Wagner himself who established the tradition of the “bleeding chunk”, spending over a year from November 1862 touring Europe as conductor with portions of ‘The Ring’ and The Mastersingers, both then unfinished. In May 1877 he even appeared at the Royal Albert Hall. I’m not sure whether the composer would have wanted ‘Siegfried’s Funeral March’ bookended by applause but our ultimate rewards included a short speech from the conductor, a beautifully poised account of the Prelude to Act Three of Die Meistersinger and, after many in the audience had left, a barnstorming Prelude to Act Three of Lohengrin.

At one point Barenboim opted for some Bernstein shtick, leaning back on the railing and barely conducting; something for the cameras perhaps. Or was it meant as a tribute to the bravery, trust and faith of his fellow travellers in what remains a visionary project?