The John Cage centenary this September was likely to galvanize attention in musical circles, and the BBC has responded with a wealth of events – the centrepiece being this Prom which brought together a host of musicians, and not a few illustrious names, in a programme that offered a viable overview of this most recalcitrant among twentieth-century artists.

Much of the planning has been undertaken by Ilan Volkov – the BBC Scottish Symphony Orchestra’s Principal Guest Conductor, whose commitment to alternative and experimental music-making, not least with his Levontin 7 project in Tel-Aviv, has been evident throughout his career. Typically his podium presence was not required for 101 (1988), though the orchestra’s handling of this evocative score – in which Ivesian atmosphere and Feldman-like contemplation are brought into telling accord – confirmed his thoroughness of preparation beforehand. Less involving was Improvisation III (1980), in which eight cassette players (remember those!) and attendant performers were distributed in a circle around the Royal Albert Hall’s Gallery and stage – an arrangement whose spatial impact was not equalled by the overly dreary and muffled sounds emanating from the recordings. Perhaps such concepts seem simplistic given the sophistication of present-day remixing: then again, Cage had the profoundest of reservations over improvisation and this could just be his way of confirming it.

Much more pleasurable were the vocal items that followed: Joan La Barbara gave a lovingly unaffected rendition of the sensuous e. e. cummings setting that is Experiences II (1948), then joined Exaudi in the delicate antiphonal vocalises on the letters E, A and R that constitute ear for EAR (1983); the latter ensemble then continuing with the ethereal vocal play on the name Oregon, in the Hood River Valley High School-commissioned FOUR2 (1990). 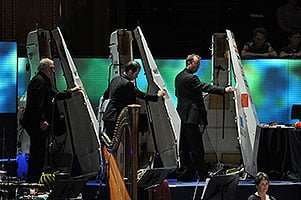 Christian Marclay’s Baggage (2012) might have proved a worthwhile component of the evening, but the sight (and sound!) of the BBCSSO musicians self-consciously playing their instrument cases suggested he should stick to silent rather than sound installations in future.

The first half culminated with one of the simultaneous presentations that Cage favoured throughout the 1950s and 1960s – a half-hour that duly commenced with the anarchic sound reproduction of Cartridge Music (1960), then gradually made way for the orchestral star-gazing of Atlas Eclipticalis (1962) which was itself enriched with the multiple piano interplay of Winter Music (1957). While the first and last of these are very much the preserve of Cage devotees, the central piece has tended to be butchered by unsympathetic or, worse, ignorant orchestra members who see even limited creativity as inimical to their profession. No-one could have accused the BBCSSO of such apathy and, while its collective contribution seemed just a little reticent in context, the allure of the resulting sounds could hardly be gainsaid – enhanced as it was by the integration of the orchestra with the live electronics and pianos at various junctures in the Arena. The outcome was unpredictable and, on occasion, audacious music-making such as would doubtless have delighted Cage.

No less engrossing was the account of the Concerto for Prepared Piano (1951) that followed the interval. The decade after the Second World War gave rise to some of Cage’s most enduring works – not least among them this artful though highly systematic rethinking of the concerto genre whose three movements effect a culmination through gradually paring down the sonic and expressive range of the soloist, along with a chamber orchestra in which the use of percussion is among the most beguiling of any Cage piece. It helped to have John Tilbury (whose fine disc of Sonatas and Interludes has recently been reissued) as an unusually ‘prepared’ pianist whose ensemble interplay was as deft as it was illuminating.

From the stage to the expanse of the RAH acoustic and a performance of But what about the noise of crumpling paper … (1985) – originally conceived for Les Percussions de Strasbourg as a commemoration of the impending centenary of artist Jean Arp, and given here by a dedicated decet whose gentle overlaying of sounds still failed to provide other than a pleasant if inconsequential ambient background in itself less distinctive than the piece’s full title (for which check online). Far more compelling was the Quartet (2012), in which four improvisers in the truest sense of the term – two handling live electronics, one the guitar and one the piano – gave a veritable masterclass in the realm of anticipating and responding to the promptings of the moment. It hardly needs adding that, in terms of uninhibited and resourceful music-making, this offered the most inherently Cage-ian experience of the concert – not least in there being no aspect of the performance which was ‘by’ Cage but in which everything heard bore his creative imprint. 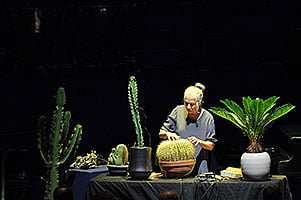 After this, Branches (1976) made for a rather anti-climactic end to proceedings. Not that its scoring for “amplified plant materials” could be anything other than eye- or ear-catching, but this spatial assembly of largely cactus-playing musicians – not so much guided by as centred on Robyn Schulkowsky at the front of the stage – underlined the way in which an abnegation of self in the creative process can all too easily lead to an absence of definable content. What resulted was a soundscape no more or less diverting than the majority of ‘piped’ music which has become the decreed accompaniment to Western culture: from here to the irretrievable decline of said culture might at least prove as pleasant as it is inevitable.

Perhaps this is to make too much of a situation which Cage would hardly have claimed to be of his own choosing. What the present evening did confirm was the range and scope of his output, which, if nothing else, reaffirmed the primacy of sound in the musical process – a facet that triumphed over whatever failings there may otherwise have been.