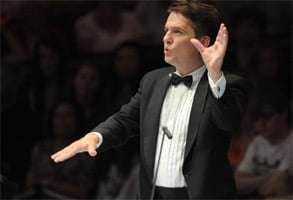 You’d think that an evening of familiar film scores – title tracks, suites and arrangements – would be all pleasure. As it turned out, this full-to-capacity Prom turned out to be rather under-nourishing. I think it’s something to do with ‘art’ (for want of a better word) music giving the listener more freedom of response, to evolve their own agenda, whereas film music is much more specific and leaves you gagging to see this roster of mainly Hollywood classics covering the 1940s to last year – which is, of course, the point. What was so gripping about this concert is how composers have, or have not, turned this machination to their advantage; and, even more fascinating is the way the best scores clinch the movie’s sense of style. In this respect Bernard Herrmann’s music wins hands down in Alfred Hitchcock‘s Psycho, a real union of seen and heard, that edgy, whining tune shared out between violins and cellos (and which never settles into a closing cadence), an unforgettably detached sense of unease as poor Janet Leigh drives to her date with destiny at the Bates Motel – and in idiom, the noisy opening-reels to The Man Who Knew Too Much and Citizen Kane that turned their backs on the European traditions that nourished it. 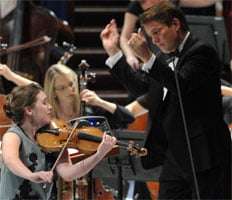 Ennio Morricone has proved to be a brilliant atmospherist for Sergio Leone’s films, and is no less so in his luscious theme for Giuseppe Tornatore’s fond and sentimental Cinema Paradiso, with Chloë Hanslip’s sweet and full violin-playing wringing out every last drop of nostalgia. Morricone (and his son Andrea) was lucky to have been given such a free hand by directors willing to fit the film to the music. The suite Muir Matheson (the eminence grise of British film music in the 1940 and 1950s) arranged from William Walton’s score for Laurence Olivier’s Henry V confers a stature on the music that it struggled to achieve in the film, an also-ran to Shakespeare’s play. Rory Kinnear, who narrated the rejection of Falstaff, and the Agincourt and St Crispian speeches, conjured up enough patriotic fervour to fuel a whole month of Last Nights of the Proms, and in the current climate must have given those who try to love their country plenty of food for thought.

In terms of style and content, John Williams’s Star Wars main title is in a league of its own, secure in its ineffably pompous Wagnerism. You only have to hear the first bar to be in a world of terrible 1970s’ big hair, guff about galaxies far way scrolling away into infinity, light-sabres, and words in the order right not spoken. It and George Lucas’s film are inseparable. Chloë Hanslip returned for Williams’s understated main theme for Schindler’s List, a tender companion for Steven Spielberg’s restrained film. The only film covered in this concert I hadn’t seen was Tran Anh Hung’s adaptation of Murakami’s novel Norwegian Wood, but I’ve heard it’s as slow and allusive as Jonny Greenwood’s highly-wrought score, replete with note-clusters and glissandos, suggests. The only music to resort to thorough pastiche was Richard Rodney Bennett’s for Murder on the Orient Express, which takes charge of Agatha Christie’s whodunit and a Hollywood cast out-thesping each other with a vengeance. Still, it’s all of a piece in Sidney Lumet’s overblown style.

John Barry’s James Bond music has got a lot to answer for in terms of impossible dreams of shaken-not-stirred glamour, its braying butchness speaking volumes about male ascendancy. The BBC Concert Orchestra gave its tongue-in-cheek all, and was on the money as far as the concert’s huge range of style was concerned under the flamboyant Keith Lockhart.