Fred and Ginger at RKO – Top Hat; Swing Time; Shall we dance?

Hollywood goes to war – Strike up the band; Can’t Help Singing; On the Town; Four Jills in a Jeep

Judy’s Comeback – A Star is Born

From Stage to Screen – Gypsy; West Side Story; The Music Man; The Band Wagon; Guys and Dolls

Following on from the 2009 Prom celebrating MGM’s musicals, this 2011 Prom cast the net a little wider by taking a look at what other studios were doing at that time. Warner Brothers, RKO and 20th Century Fox all had impressive music departments. Warner Brothers pioneered talking-pictures and with its release of the first feature-length movie in 1927, The Jazz Singer, the Golden Age of Hollywood began. This concert focussed upon key events in the thirty-year period that started with Warner Brothers’ 42nd Street in the early-1930s and ended with 20th Century Fox’s Hello, Dolly! in 1969. In between came the seven years that Fred Astaire and Ginger Rogers spent at RKO, the Second World War and the move from stage to screen. 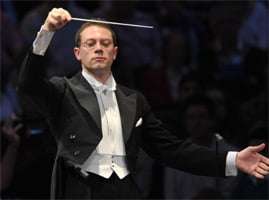 John Wilson, speaking to a packed Royal Albert Hall, said that very little of significance happened between The Jazz Singer and 1933 when movie-director and musical choreographer Busby Berkeley arrived at Warner Brothers to choreograph Harry Warren’s 42nd Street. For Wilson, this was the birth of the movie musical. However the opening Overture recognised two notable exceptions – ‘Swanee’ from The Jazz Singer and Al Jolson’s 1928 follow-up hit The Singing Fool – also a Warner Brothers production. 42nd Street was the first grown-up film musical and as a testament to the lasting success of Warren’s music it was produced for the stage in 1980 winning the Tony Award for Best Musical. Though only five songs were used in the film (more from the Warren/Dubin catalogue supplemented the stage show), ‘You’re getting to be a habit with me’, and the title-song were overnight successes. Annalene Beechey’s Prom debut signalled what was to come in a tightly-rhythmical performance sung with 1930s’-depression-filled New York authenticity and a convincing accent.

As previous Proms have shown, the partnership between the Maida Vale Singers and the John Wilson Orchestra is a fruitful one built upon mutual respect for the music. (The JW Orchestra and MV Singers have been here every year since 2009.) In the last three years we have become accustomed to the polished craftsmanship of Wilson and his assistants (and his hand-picked musicians) who painstakingly recreate this wonderful music. In this prom we heard the well-known alongside the less-familiar, all given to a new audience. 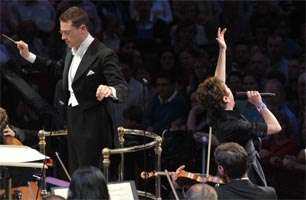 Hollywood folklore says that Fred Astaire’s RKO screen-test report read: “Can’t sing. Can’t act. Balding. Can dance a little.” From such a disappointing first encounter the partnership between Fred and Ginger grew. They made nine musicals together, for the fourth – Top Hat (1935) – Irving Berlin was the composer to what was to become F & G’s most successful film. Matthew Ford, known as one of the finest big-band singers in the UK, was unsteady at the start in the title-tune but became more convincing as the evening went on. The RKO era continued with music from Jerome Kern and vocals from the splendid Clare Teal (from BBC Radio 2’s Big Band Special) in a fine performance of ‘A Fine Romance’ from Swing Time. Ford seduced the ladies in ‘The Way You Look Tonight’ which, by way of segue, led seamlessly into George and Ira Gershwin’s 1937 musical Shall We Dance and a duet for Ford and Teal in ‘They All Laughed’.

In terms of balance, the loudspeakers being placed high in the canopy over the orchestra made the perennial problem of amplifying the singers more acute. Soloists and orchestra will always fall into different soundscapes while this overhead system continues to be used though. 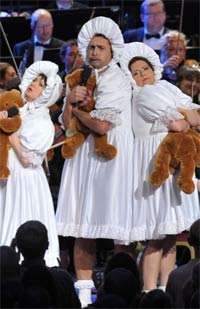 Jeanette MacDonald is best remembered for musicals with Maurice Chevalier (Paramount Studios) and Nelson Eddy (MGM). Her trained voice gave composers such as Rudolf Friml (Rose Marie, The Vagabond King) and Sigmund Romberg an opportunity to stretch the conventional bounds of musical theatre. Maytime established Romberg as one of the leading operetta composers. The story and the score of the 1937 film was different to Romberg’s original 1917 Broadway production with only one song remaining – ‘Will You Remember (Sweetheart)?’ The sassiness of 42nd Street a memory, Beechey found the perfect mixture of loving-warmth and impossible-love in this beautiful song.

The war years for Hollywood ignited patriotic fervour amongst its composers. Gershwin’s Strike Up the Band, with Caroline O’Connor’s marching entrance, and a solitary Star-Spangled Banner waving in the Arena, set us on what could easily have become a jingoistic frenzy. Jerome Kern’s ‘Can’t Help Singing’ introduced the delicious voice of Sarah Fox. A technique honed through the singing of late-nineteenth-century operatic roles meant that competing with an orchestral tutti was never going to be a problem; amplification was therefore not needed and a much better balance was achieved. On the Town – Bernstein’s development of his ballet Fancy Free – was given a similar treatment to Romberg’s Maytime when it was made into a film in 1949. Most of Bernstein’s music was dropped (apart from ‘New York, New York’) in favour of songs by Roger Edens whose soft-shoe shuffle in ‘Main Street’ was expertly acted out by the Maida Vale Singers. The war years ended with a heart-felt presentation of the Harry Warren classic ‘You’ll never know’ made famous by Vera Lynn, the wordless Maida Vale ladies adding to the realism as a tear formed in the eyes of the more elderly members of the audience.

Judy Garland’s appearance in A Star is Born was promoted as her comeback (she had been replaced by Jane Powell in the 1951 film, Royal Wedding). With music by Harold Arlen and lyrics by Ira Gershwin, Star was an instant sensation. Caroline O’Connor stole the show with her brassy rendition of ‘The Man That Got Away’ after a more-flippant account of ‘Gotta Have Me Go With You’ in which she was joined by the Maida Vale Singers’ tenor Stephen Douse and bass Matthew Little. Onto the Fabulous Fifties and a delightful account of Sammy Fain’s ‘Secret Love’ from Calamity Jane. Sadly the low-register verses and ever-keen Orchestra meant that Clare Teal’s voice was inaudible until the fantastic sweep skyward to the words “Now, I shout it from the highest hills” – but, what a song! Romberg made another appearance in the 1950s section with The Student Prince that introduced Charles Castronovo. The credits to the film read “the singing voice of Mario Lanza”; Lanza had been dismissed by the studio after an argument with producer Dore Schary to be replaced by Edmund Purdom who mimed his way through the songs. New York-born Castronovo is familiar to the world’s opera-going public. He has won special praise for his Mozart roles such as Tamino (The Magic Flute) and Don Ottavio (Don Giovanni). Castronovo’s performance was exceptional.

The penultimate section: From Stage to Screen looked at musicals that found their way to the silver screen in the 1950s and 1960s. Gypsy had been a critical success for Jule Styne and Stephen Sondheim in 1959. It contains many songs that have become standards, such as ‘Everything’s Coming up Roses’ and ‘Some People’. The Overture was given a welcome airing and with a nod to Ethel Merman for whom the part of Madam Rose was written. Sondheim appeared once again as the lyricist of West Side Story alongside composer Leonard Bernstein. The melody for ‘One Hand, One Heart’ was originally written for Candide. Bernstein’s 1984 recording of West Side Story using opera singers (including Kiri Te Kanawa and José Carreras) clearly meant something special. This exquisite account by Fox and Castronovo, would no doubt have pleased the composer.

At the end of a music-packed evening was the section entitled End of the Golden Age. Here there was a dip into the latter-day genii of the Hollywood musical: Richard & Robert Sherman (Mary Poppins), Leslie Bricusse (Doctor Dolittle) and Jerry Herman (Hello, Dolly!). To start with we had a UK vocalist doing an impression of an American actor doing an impression of a cockney, in ‘Jolly Holiday’ from Mary Poppins. It is difficult to listen to this song without wincing at Dick Van Dyke’s dodgy accent, generally regarded as the worst in cinematic history, though he claims that his Irish coach didn’t do the accent any better. Thankfully Matthew Ford does a lousy impression of Dick Van Dyke! Keeping to the theme of a less-than-perfect singing-voice we turn to the tone-deaf Rex Harrison for whom composers wrote for him to ‘speak to the music’. Matthew Ford’s account of ‘When I Look in Your Eyes’ from Doctor Dolittle navigated skilfully its tricky speech-like rhythms. The whole company returned to see off ‘Put on your Sunday Clothes’ from Hello, Dolly! before the inevitable encore took us back to the beginning with Richard A. Whiting’s ‘Hooray for Hollywood’ taken from the 1937 film Hollywood Hotel.