Human Planet Prom, with music from the series by Nitin Sawhney, and Scrapheap Orchestra 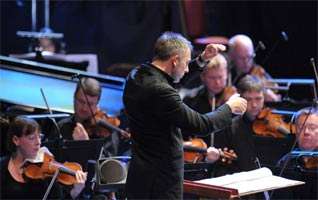 After what me might call BBC-branded Proms, usually aimed at the younger range of the spectrum – Blue Peter, Doctor Who and the Evolution Prom – the 2011 season turned to one of the corporation’s glossiest documentaries: Human Planet, in which, in eight programmes, the famed Natural History unit from BBC Bristol teamed up with documentary makers and High Definition experts from BBC Cardiff to treat the human species in the way that we usually see wildlife on the box. Dubbed in some reviews as “anthropology porn”, there can be no doubting the utter beauty of the footage, as displayed on various screens around the Royal Albert Hall and I remember, even having only seen one programme (Deserts), that the various stories that were followed, mainly about human adaptability in the most hostile of natural environments, were a little too tidy, if not gently manipulative.

On my one viewing from the series I had not properly registered the accompanying music, but Charles Hazlewood and the BBC Concert Orchestra put me straight in what was the first of three separate strands to this concert: the live accompaniment to specially cut sequences of the series with Nitin Sawhney’s score, newly orchestrated not only for this concert but (as Sawhney himself advertised at the end) a UK tour of the project next year, following in the footsteps of The Blue Planet and Planet Earth. I was very taken with Sawhney’s music, treading – as it does – the tricky line between enhancing the scenes without overshadowing them. Much of the music could stand on its own without the superb cinematography. Whether subtle changes of key to move from desert or lush tropical rain-forest to vast arctic wilderness, or major-key harmonies to accompany smiling children of all cultures then mischievous critters – particularly monkeys – we had five specially created excerpts. 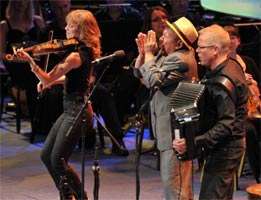 More unusually was the second strand, building on relationships that the production team of BBC Radio 3’s complementary series to Human Planet – Music Planet – had made. Starting with Greenland singer Rasmus Lyberth, accompanied (rather ‘crossover’-like) with violin and accordion, we had between two to four songs from indigenous performers, nearly all making their UK debuts, some travelling from their home villages for the first time. They all had some form of headwear. Enock Mbongwe, accompanying himself on the kolumbo (musical bow), wore a specially made shirt revealing his stomach which, with the gourd, helps the instrument resonate, when hit with a stick. His music is a way of recording the history of his peoples, and is more like recitative. More developed harmonies came with the six-piece ensemble from Mongolia, in flowing white robes and caps. Khusugtun’s music has a drone-like rasp and is accompanied with nasal-sounding strings, their instruments’ necks ending in finely carved horse heads. Central to the group was Ariunbold Dashdorj’s ‘grand fiddle’ ikh kuur – like a square double bass – and there was also Amarbayasgalan’s zither (chovjoo). You can well imagine this music sounding across the Mongolian landscapes from yurt to yurt, as it has from the time of Genghis Khan.

After the interval we moved further north to the wastes of Siberia and to the female trio, with metal tiaras for their head adornment, Ayarkhaan. From Yakutsk, which can claim to be the city which has the biggest temperature range (some 60 degrees – from -40 in January to 19 in July), they came to sing songs of the hardy Siberian horses, and we were treated to the extraordinary sound of throat-singing, imitating wind and horses’ whinnying as well as the distinctive click and twang of the khomus, the mouth (or Jew’s) harp. Our international visitors ended with the biggest group, the eight-man Bibilang Shark-Calling Group from New Island, Papua New Guinea. Their four-song set, starting with the rather alarming Sogonsok (‘killing people’) relating to their tribes’ headhunting past, before three songs associated with the shark-calling ritual which featured in the series, ending in a dance which re-enacts the “calling, baiting and killing of the shark”. Here the two guitars and percussion instruments underpinned the songs with an insistent rhythm that got the orchestra going as much as the orange costumes and white-feather head-dresses.

That cued a standing ovation, not the only one of the evening. Presumably not being broadcast with the rest of the Human Planet Prom on 5 August (BBC 4), the opening of the second half marked the culmination of another BBC 4 project in which Charles Hazlewood challenged top instrument-makers to re-make a whole orchestra from scrap. To be aired in the autumn as Scrapheap Orchestra, this Prom marked the culmination of the project with a remarkable performance of Tchaikovsky’s 1812 Orchestra, in a special arrangement. Hazlewood introduced some of the instruments – the cello made out of plywood and two washing-up bowls, the double bass from parts of a car, a white bassoon taken from a shower cubicle, the resplendent tuba from an air-conditioning unit, and horns from mostly papier-mâché. Even the bows were made of scrap – including a coat hanger. The winds and brasses sounded remarkably faithful, the strings having more of a raspy quality. The BBC Concert Orchestra rose to the challenge magnificently, particularly its percussion section, not only in the home-made cannons (complete with smoke) but also the extraordinary lengths the makers had gone to replicate the sound of cymbals, needing a whole bedstead and including small metal pieces that jangled to create an after-effect.

Such Heath Robinson ingenuity raised the roof, but would this section not have been better placed in the forthcoming Comedy Prom (40). On balance this was an unusual and enterprising concert, notable for the introduction of some wonderful musicians. Sawhney’s music was probably overshadowed by both the indigenous elements and the Scrapheap Orchestra, but Paul Rose – stepping in to replace narrator John Hurt – coped relatively well with the autocue (Sawhney gave up with it for his turn). Stage re-sets elongated the concert to past its advertised end time. The very informative programme-book was produced in full colour.