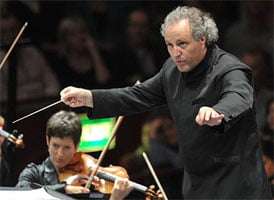 With its impressive sequence of big-name music directors and extensive foreign touring, the Pittsburgh Symphony Orchestra is an institution that has consistently punched above its weight. Manfred Honeck may not have the name-recognition of some of his predecessors but, despite straitened finances, his arrival has reportedly generated real excitement after the post-Mariss Jansons years of treading water. A sometime Abbado assistant who spent years as a violinist in the Vienna Philharmonic under such as Leonard Bernstein and Lorin Maazel (the latter a Pittsburgh predecessor), he brings a wealth of insider-knowledge to his music-making and a distinctive if hyped-up Viennese/Bohemian take on expressive content. Placing his Second Violins on the right and tucking in the double basses behind the Firsts, he encourages ultra-expressive playing with generous, some would say over-generous, inflections of tempo and dynamic within the larger frame. Rubato is ubiquitous, wind solos are allowed an invasive rustic edge and there is no shortage of vibrato from the eloquent Pittsburgh strings. Good intentions then but two big problems on the night: the unblended brass section consistently dominated everything else while the longer line of the three works sometimes got lost in a welter of surface incident.

The Wagner was presumably chosen to demonstrate the prowess of the PSO’s sweet-toned strings, the Mahler to showcase a cycle that is being put together for the Japanese Exton label. No.5 is heard so often these days that it can be difficult for even the most expert teams to impress with it; at the 2006 Proms the Minnesota Orchestra and Osmo Vänskä underwhelmed. Honeck, another conductor who knows what he wants (and is no stranger to the work having led a previous Proms account with the Oslo Philharmonic back in 1996), fared better but it was not plain sailing. There was no lack of character in the opening funeral march, the scherzo sounded less interminable than it often does and the fine control of string tone made for an absorbing Adagietto at a broad tempo. At first the boisterous finale looked like capping the reading in rather splendid fashion, lighter and lither than the norm … until the blare of horns and trumpets wrecked the effect. Has Honeck’s mix of European string sound and American wind sonority yet to settle? Perhaps the acoustic of Heinz Hall makes for a different, less-strident effect. I may react less negatively than some to the conductor’s manicured, stop-start approach but the Mahler risked turning into a concerto for brass band. Applause between movements was back too. 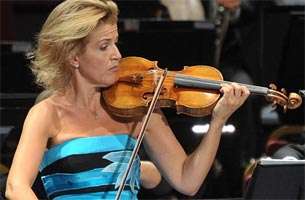 At the geographical heart of the evening the inimitable Anne-Sophie Mutter arrived in a strapless turquoise frock. Surprisingly perhaps she was not peddling her new disc of contemporary would-be classics. Instead she revived the 24-minute piece composed for her by Wolfgang Rihm in 1991 and 1992 as an on-disc partner for Berg’s Concerto. Large claims are made for Rihm as one of the important composers of his generation. His pieces are perhaps too numerous and too various for non-specialist listeners to get a proper handle on him – but Gesungene Zeit (Time chanted), a study in sonority which uses a small orchestra at first as a kind of resonating chamber for the violin, is alarmingly thin stuff and not much happens. Mutter, whose insistent, high-octane performance-style is not to all tastes, played from the score. One could only marvel as she contrived to keep Rihm’s essentially monophonic construction airborne, the high-lying violin ‘aria’ sustained with the full sonority and unending line she once claimed to have learnt from Herbert von Karajan and also attributes to the properties of her own violin. Surrounding her were a variety of special effects, too many of them sounding like the keening of hearing-aids at a Sunday morning concert at Wigmore Hall. The hum of a generator somewhere in the building accompanied the closing bars. Undaunted by cannonades of coughing and fairly lukewarm applause, Mutter played something else, the ‘Sarabande’ from the D minor Partita (BWV1004). Bach encores seem to be a new Proms ‘tradition’.

The orchestra offered two Carlos Kleiber-associated extras after the Mahler. The best and subtlest playing of the evening came in Josef Strauss’s slow polka Die Libelle (The Dragonfly), its launch delayed by the distant sound of crashing glassware. Alas the orchestra’s buzz-saws were out in force again for a chunk of Der Rosenkavalier, but the capacity crowd seemed happy enough with it.