Love it or loathe it, the Royal Albert Hall is a marvel of Victorian architecture but it is not perhaps the most obvious venue for launching the more delicate and elusive brands of Nordic creativity and/or emergent pianism. Decent houses are almost guaranteed now that Henry Wood’s annual music festival is treated as a tourist drop-in by a fair number of its attendees. Less in evidence is the rapt attentiveness of former years. That special Proms atmosphere arrived only during the Nielsen, a very fine performance, though even there I counted at least three intrusions from mobile phones.

The Sibelius made a predictably unassuming opener. It’s a Sakari Oramo staple almost as much as The Inextinguishable (which he gave here previously in 1999 during his Birmingham tenure); his interpretation remains controversial though less pressed than one remembers it, at least until the finale. The first movement certainly flows, eschewing at all costs the treacly and the lachrymose, which is not to say that such uneventfulness need be considered authentic. We know that the composer was unimpressed by the first commercial recording made by Georg Schnéevoigt and rated Herbert von Karajan’s Wagnerian approach more sympathetically than his latter-day admirers. In the last movement, after favouring some unusual voicings in the strings, Oramo suddenly ratcheted up the tension yet avoided full-throated rhetoric in the closing stages. The protracted dying fall seemed over-extended. This classically-scaled, (mostly) cleanly executed reading was performed without breaks between movements and the conductor managed to sustain the atmosphere at the close by keeping an arm aloft, dissuading premature applause. 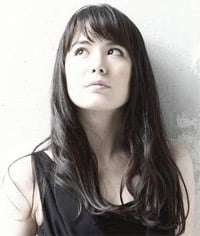 The personable German-Japanese soloist arrived shoeless in the manner of Sandie Shaw or Evelyn Glennie, wearing the lovely red frock featured in some of her publicity material. Heavily promoted in the modern manner her limitations were on display as much as her strengths in a decidedly dreamy, droopy and finally dreary account of the Grieg. With forward momentum at a premium, one could admire Alice Sara Ott’s beautiful limpid sound and liquid phrasing in pianissimo passages but the big moments were oddly tentative or otherwise undersold and found the small shallow sonority hardening under pressure. Successful recitalists are not always at home in the Royal Albert Hall. Ott’s Liszt encore, ‘La campanella’ (from the Paganini Etudes), dazzled decorously with pearly tone but its inclusion was not really merited by the lacklustre account of the concerto. In the barnstorming virtuosity stakes, Benjamin Grosvenor has nothing to fear. The best thing about this performance was the tactful accompaniment, the strings opening the slow movement with maximal sensitivity and freshness.

Oramo has not so far as I am aware made a commercial recording of Nielsen’s ‘Inextinguishable’ Symphony but it is one of his party pieces and a work he continues to direct with authority, flair and enthusiasm. It might be argued that the blunt fervour of Sir Colin Davis’s recent Barbican account is missing (the Swedish orchestra lacks the heft of the LSO) but in truth everything is more finely balanced, every orchestral section alert, every detail clear. The strings were predictably bright-toned and sophisticated but the careful delineation of the ‘battling’ timpani came as a surprise, very different from the usual noisy clatter. Super-articulate without short-changing emotional content, the music-making was received with appropriate rapture.

It was not an evening to remind us of the conductor’s remarkable openness to unusual repertoire but there was after all something Swedish to add to the mix in the vivid encore, ‘The Herdmaiden’s Dance’ from Hugo Alfvén’s The Mountain King. Combining fluid gestures and a clear indication of pulse, Oramo’s conducting style certainly gets results and is a pleasure to watch. Like David Robertson he smiles a lot. Too much?