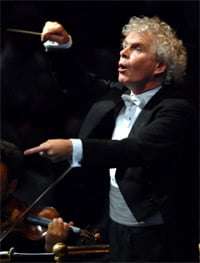 On the question of ‘authenticity’ (which is what the Orchestra of the Age of Enlightenment aspires to be about), I wonder just how ‘authentic’ it is to present excerpts from these two great works? I know the intention was to point up the links (and contrasts) between Berlioz and Wagner, and “Roméo et Juliette” and “Tristan und Isolde” (I wish the Proms programmes would give titles in their original languages) in particular, but I question to what extent either composer would have been happy with this particular juxtaposition.

The ‘Scène d’amour’ is the third part of Berlioz’s ‘Dramatic Symphony’, though strictly speaking it begins with a muted orchestral introduction preceding a double chorus offstage representing the departing revellers from the Capulets’ ball.Simon Rattle began at the Adagio marking and there was a noticeable distinctiveness about the orchestral sonority, and a hushed atmosphere was created immediately – in spite of the disturbance caused by the entrance of latecomers. The nine double basses that flanked the back of the stage made notable and sonorous contributions, whether bowed or pizzicato. Indeed the clarity of the bass line throughout was a significant feature. The somewhat ‘soft-grained’ sound of the whole certainly made one aware that one was hearing this music projected in a different way – the brief ‘agitato’ passage for upper woodwind was most telling in this regard – and Rattle ensured that there was a real sense of ‘dialogue’ between the instruments which represent the protagonists. Interesting though it was, however, this 15-minute-or-so segment was not, ultimately, satisfying as a musical experience.

Had this been a fully ‘authentic’ occasion, we would have experienced ‘Tristan’ as a whole in a theatre, with a staging faithful to Wagner’s precise and detailed stage-directions.As it was, this performance underlined the sheer audacity of Wagner’s scoring – whether vocal or instrumental – as well as the thought-provoking nature of his own libretto.

It was in the loud (and very loud) passages that one noted (as was the case with the OAE/Rattle “Das Rheingold” at the 2004 Proms) a lack of sheer weight of the sound that one is accustomed to from a so-called ‘Wagnerian’ orchestra, and in one or two brass and wind passages, there was the odd moment of sour intonation and imprecise articulation. They were not features of the execution as a whole, but they intruded nonetheless. Some ‘bubbly’ horns and trombones towards the end detracted from the proceedings, and the ‘period’ trumpets were not really able to cut through the full-orchestra texture right at the close. Wagner surely wanted this anguished phrase to be heard clearly. At the other end of the dynamic scale, I would have liked to have heard more from the harp; the writing for this instrument in this score is particularly distinctive. Elsewhere, the playing was secure with solo phrases executed convincingly and expressively – none more so than the bass clarinet (less ‘comfortable’ sounding than its modern equivalent) eloquently played by Katherine Spencer, accompanying the outstanding Franz-Josef Selig, who was the best of the soloists. His delivery of King Mark’s narration was most moving and the sense of dramatic contrast to the agitation of what had gone before was most telling. 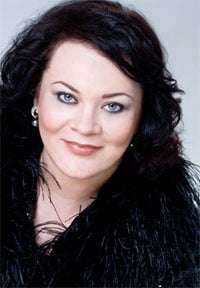 Violeta Urmana was a somewhat imperious Isolde. She commands some tremendously powerful and secure top notes, but was less convincing in gentler passages where a sense of tenderness, even vulnerability, should surely be conveyed. At the opening, Urmana and Sarah Connolly made effective foils for one another, with vehement, impassioned exchanges. Later on, Connolly was heard to fine effect singing her calls ‘from the battlements’ from towards the rear of the choir seats. Timothy Robinson’s Melot was clear and convincing, but whilst I appreciate that Henk Neven is a BBC Radio 3 New Generation Artist, was it really necessary to import someone from The Netherlands to deliver Kurwenal’s three words none-too-clearly?

Whilst one appreciates that the role of Tristan – alongside that of Siegfried – is one of the most challenging of all, Ben Heppner was not consistently secure across the registers. His basic tone remains warm and attractive and his projection of the text exemplary, but there were clearly moments which gave him anxiety, and his final call of “Wehr dich, Melot!” did not register as resoundingly as it should.

Whatever incidental moments of insecurity there may have been, the power of Wagner’s astonishing music was strongly projected overall; that in itself is surely a truly ‘authentic’ experience.