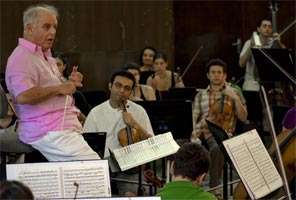 Following two concerts the previous evening, Daniel Barenboim and the West-Eastern Divan Orchestra might have welcomed the afternoon off, especially with “Fidelio” looming. Instead, nine members of the orchestra and their maestro gave a particularly illuminating “Proms Plus” event to a capacity audience (and that means quite a lot of people) in the Royal College of Music’s main concert hall. Roger Wright introduced and closed the afternoon, and for the 75 minutes in between Barenboim and the musicians focussed on Pierre Boulez the composer. Barenboim and Boulez first met in 1964 when the former was soloist in Bartók’s Piano Concerto No.1 in Berlin, Boulez conducting. Their friendship since then has been enduring and productive; to quote Barenboim, Boulez is “a formidable presence in so many ways.”

Given their brevity, Karim Said might as well have played all twelve of Boulez’s Notations; I’m not convinced that he played the eight that both Wright and Barenboim announced, for it seemed more like the seven that the sheet of paper that passed as a programme advised. Barenboim’s success is that he shared his enthusiasm for and perception of the music with spontaneity and wit. The first Notation that Said played (No.1) seemed to require no further word; but Barenboim analysed it in such a way as to make its taking apart a source of genuine illumination. And what worthwhile music this is, from violent to poetic; no wonder Boulez is currently expanding these early pieces (from 1945) for large orchestra “lavishly and gorgeously” (Paul Griffiths), a project that will hopefully reach fulfilment.

For the rest of the Boulez programme, engagingly introduced by Barenboim without recourse to notes, during which he made the distinction that Boulez’s music is “complex but never complicated”, Michael Barenboim (Daniel’s son) played the expressive and fantastical Anthèmes I (1992) rather than the advertised Anthèmes II (also for solo violin. much longer, and with an electronic component).

Messagesquisse (1977) is “for solo cello and six accompanying cellos” and ranges from lyrically intense to scintillating, its scurrying sometimes surprisingly recalling the music of Lutosławski (a composer that, as far as I know, Boulez has never conducted). Here Barenboim connected ideally with Messagesquisse, talking vividly (with musical examples) about the six cellos’ roles as shadows and commentators to the solo cello’s lead: “organised chaos or disorganised order … I don’t know which!”, said Barenboim with humour and affection. He then conducted a complete performance and the musicians brought the music alive.

Being unscripted and with no sense of “Fidelio” impinging on Barenboim’s time, this “Proms Plus” event was longer than anticipated, leaving those off to watch a film on the West-Eastern Divan Orchestra in another location only a handful of minutes to get there! 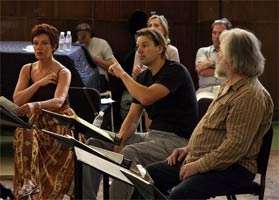 A few hours later we were in a packed Royal Albert Hall. Whether “Fidelio” is a true masterpiece or a flawed one, it communicates directly – about human endeavour and ‘good’ conquering ‘evil’.

The opera gave Beethoven problems, from “Leonore” to “Fidelio” (a change of name that Beethoven was not happy about) taking-in a decade and two revisions. Barenboim opts for the first revision, as performed in 1806, which means ‘Leonore No.3’ is the overture and the first two numbers are played in reverse order to the definitive score. The use of ‘Leonore No.3’ certainly plunges us straight into the drama and has motifs that will be heard later (unlike the ‘real’ “Fidelio” overture). Furthermore, the dropping of dialogue for Edward Said’s narration is an interesting if not an entirely convincing one. Leonore reminisces on events (in English and spoken by Waltraud Meier as pre-recorded interludes). The links are pertinent to the drama, yet gaps between them were too long, and her delivery somewhat ‘slow’. Maybe, after all, live dialogue between the protagonists is preferable.

Barenboim’s pacing of the long first act (too long in relation to the second one – some conductors, the recorded Leonard Bernstein being one, insert ‘Leonore No.3’ between its two scenes) perhaps lacked requisite tension for all that the playing was excellent in its finish, interaction and devotion; yet it caught well the ‘domestic’ aspects that are played-out before the prisoners have their rare glimpse of daylight and Leonore (disguised as Fidelio) begins her earnest attempt to rescue her husband Florestan who is incarcerated underground. 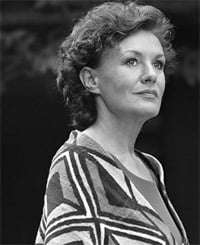 Act Two – Beethoven dispensing with one of the three trombones required for Act One and introducing a contrabassoon for some reptilian slithering to underline Florestan’s hidden and darkened imprisonment – from its gloomy and baleful opening rose the emotional stakes, Simon O’Neill’s plangent and heroic tenor filling the hall with righteousness (only now does Florestan appear), through the overthrowing of the corrupt Don Pizarro (even if Gerd Grochowski, replacing Peter Mattei, didn’t make too much impression as either singer or character), a sublime vocal quartet, to general rejoicing (lusty choral singing), Barenboim, conducting from memory, saving something for the exhilarating final bars.

Waltraud Meier was in wonderful form; her ‘Abscheulicher!’ (Act One) was a tour de force and was backed by some pretty marvellous horn-playing. Whatever he lacks in mellifluousness, John Tomlinson’s authority and vividness remains undimmed (this Rocco was clearly a good man in the wrong job) and Adriana Kucerova gave a lively and sensitive performance.

Ultimately, it was the timeless ‘message’ of the music that won through; and, at-one with the spirit of the West-Eastern Divan Orchestra, there was a real sense of working together with a common purpose.