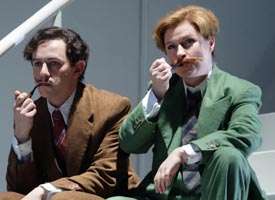 Countertenors seem to create strong emotions in their audiences – ladies may not react to the likes of Andreas Scholl in quite the dramatic way that historians tell us they did to Farinelli, but there has to be a link between that exotic contrast of ethereally high voice and masculinity which appeals to certain listeners. More than with other voices, there are clear national characteristics amongst these singers, with the American style tending towards the sweet and feminine, and the British/European towards the more dramatic – however it’s much more difficult to classify the subject of this interview, since Iestyn Davies has a timbre and style of vocal projection which seems to unify the sweetness of the American type of countertenor such as Lawrence Zazzo with the dramatic power of an Andreas Scholl. Since winning the Audience Prize and coming second in the 2004 London Handel Festival Singing Competition his career has flourished, and I spoke to Isteyn just before the first night of ENO’s new production of Partenope in which he sings Armindo.


Partenope is directed by Christopher Alden, with whom Iestyn was working for the first time – “Although I have worked with David (Christopher’s twin, whose production of La Calisto has recently been at The Royal Opera) – somehow you feel that maybe things ought to be similar with them, but they are totally opposite.” He’s excited about the staging, not least because it allows audiences to see a rarity which is full of beautiful music – “At every turn there are lovely arias where you think, ‘Oh, I’ve heard that somewhere’” – and because it gives him the chance to work with Christian Curnyn, whose approach to this music is close to his own in terms of immediacy and dramatic impetus. He had interesting things to say about the differences between European opera houses and British ones, not all of them printable, feeling strongly that our long tradition of very good singers and sight readers who can get things done quickly tends to stifle some of the daring and innovation which you see abroad.

Daring is certainly not in short supply in this production: Iestyn describes his own character in it as looking like “the love child of Salvador Dali and Buster Keaton” and he sees the 1920s’ salon, with its denizens costumed in “wonderful suits, wigs and moustaches” as the perfect setting for “the battle of love” which is the opera’s subject. I share his enthusiasm for the duality – the surreal element of the winding staircase, so potent in dreams, yet also used to comic effect in the scene where Armindo wants to go up to Partenope’s bedroom, but cannot. There was much laughter during the dress rehearsal and on the first night – “Sometimes I think the laughter was at the translation, as that’s very ‘modern’, but I think also that by about halfway through the second act the audience starts to relax and feel that it’s ok to laugh because it’s meant to be funny.” 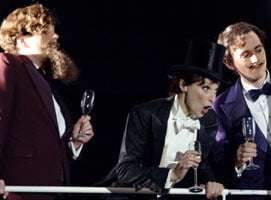 What gives Partenope its special appeal is that it’s very much a send-up of opera seria – “Handel knew what he had to do to bring in the audiences who were enjoying The Beggar’s Opera, so it’s really a send-up of all the heroics of works like Giulio Cesare – in Partenope you have triumphal arias where they shouldn’t be, and people merrily singing of joy when they are anything but joyful – it’s great stuff!” I remarked on the casting of the ‘leading man’ role of Arsace with a mezzo-soprano, and he replied that apart from pitch considerations this was very much in line with the director’s wish to emphasise the androgynous feel of the whole work – “…so you have Arsace, who we know is a male character, being sung by a woman, then you have Rosmira in disguise as a man, played by a woman … lending a whole new feel to that scene where they are about to go into bare-chested combat!”

After Partenope he will turn his attention to performances of Messiah at St John’s, Smith Square, this time not just a single event but three evenings from which will be drawn a recording on Hyperion, with Polyphony under Stephen Layton, a conductor with whom Davies feels a particular rapport – this will be his second recording of the work in a very short time, the earlier one being with Edward Higginbottom on Naxos, Davies’s ‘He was Despised’ ranks with the best I know. Despite the current climate in the recording industry Iestyn seems to be much in demand; others in the pipeline including a Chandos Anthems with the Academy of Ancient Music under Layton and a possible Samson. The latter, we agreed, is one of those Handel works like Jephtha which, though recorded often, may still await its perfect combination of interpreters. 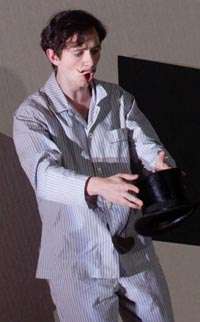 Iestyn comes from as musical family – his father is Ioan Davies of the Fitzwilliam Quartet, and he has been a professional singer since the age of eight. The Handel Singing Competition led to his engagements at Zurich and in Jephtha for Welsh National Opera – the latter production a favourite with him owing to Katie Mitchell “giving no credence at all to the notion that opera is ‘stand and deliver’” – and since then his career has focused on a wide range of opera and oratorio. His operatic debut in Zurich was in his ‘signature’ role of Ottone, in which he scored a critical success at Glyndebourne despite having come to the production quite late on – “The original casting was with a mezzo, who got pregnant, and then I shared the role with Christophe Dumaux…” and he is rapidly becoming the countertenor of choice in Handel oratorio.

Future operatic plans include his role debut as Oberon (in Britten’s A Midsummer Night’s Dream) for Houston Grand Opera, for which he says he “can’t wait – I’ve got to fly in it! And of course it’s the king of the roles as far as countertenors are concerned – it’s a kind of tradition that when you’re about to take it on you ask James Bowman if you can come and talk to him about it, which I did, but typically he said ‘Oh don’t ask me, it’s time for a new interpretation’” – apparently when Bowman did it with John Pritchard conducting much of it was going to be re-written owing to its having been mostly in recitative – ‘But then he (Britten) died, which was a bit of a pain!’ according to Bowman. Performances of Dido and Aeneas at Covent Garden, where he will sing Mercury/Spirit will follow, and he will make his Wigmore Hall recital debut in June 2009, with a programme of Purcell and Handel including the Nine German Arias, and will give a second solo recital there in November 2009.

I was intrigued to hear that in the middle of the run of Partenope Iestyn will be giving a recital at the Church of St Mary le Bow in London, including a new work written for him by the young Welsh composer Gareth Peredur Churchill. “He heard me sing in the Jephtha at the Millennium centre in Cardiff and later contacted me to say that he loved my voice and wanted to write something for me – he came up with this song-cycle, which I begged him not to write in Welsh, as even though I’ve sung in that language I don’t actually speak it, and what I really wanted was for him to create something which would enter the repertoire for all countertenors. If you ask a countertenor for a twentieth-century piece he will surely come up with ‘I know a bank’ and that’s pretty much it except for Flight (Jonathan Dove), which most of them don’t tend to do – it’s exciting to be involved with new work which might well become a part of the repertoire.”


He’s also excited to be involved with a Polish tour with the little-known but “absolutely superb” Arte del Suonatori with whom he will perform works by Bach, Vivaldi and Handel, and to be singing in the first performance of Messiah for 50 years at Wigmore Hall, which should be a sought-after event. Looking further ahead, Britten’s Death in Venice at both New York City Opera and La Scala beckons – just part of a busy schedule for a young singer of whom I wrote in 2005 that “one can only imagine how far he might go.”