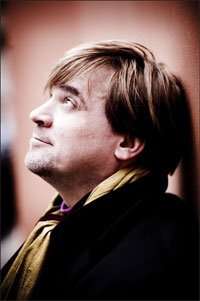 John Storgårds has been rapidly climbing the international conductor’s ladder over the last few years. He began his career as a violinist, becoming Leader of the Swedish Radio Symphony Orchestra (towards the end of Esa-Pekka Salonen’s tenure) as well as Avanti! in Helsinki. As a soloist he has performed numerous, often contemporary, concertos. Some are recorded on the Ondine label.

The conducting bug struck whilst at the Sibelius Academy. Today Storgårds has an enviable portfolio of conducting assignments. He steps down from his role of Chief Conductor of the Tampere Philharmonic Orchestra next year (2009) and has already assumed a similar position with the Helsinki Philharmonic Orchestra. He has been Artistic Director of the Lapland Chamber Orchestra for 12 years, and shows no sign of relinquishing this somewhat remote but critically important role in the Far North.

Abroad, Storgårds has long-standing relationships with the Scottish Chamber Orchestra and the BBC Symphony Orchestra and in 2009 will be conducting three of the five BBC orchestras (the exceptions being the Philharmonic and Concert Orchestras). Other engagements take him to Germany, Italy, Norway, Portugal and Australia.

So how does he cope with this flourishing career? “Well, it is a challenge at the moment with having two big Finnish orchestras to direct at the same time … as well as my commitment here in Lapland.”

He succeeds Finnish legend Leif Segerstam in Helsinki and I wonder what changes he will bring to the orchestra. An immediate and noticeable difference in repertoire was already apparent with Storgårds performing Martinů’s Sixth Symphony in September this year (2008). “This is not a work known to Finnish musicians although the players picked up the style very quickly.”


Besides such changes he will maintain the traditions of the orchestra, focussing on Sibelius and modern Finnish repertoire. “It will continue to be difficult to tour Sibelius’s symphonies 3, 4 and 6. Our hosts will always prefer 1, 2 and 5. For example, we did number 1 in Beijing during the Olympics!”

One change of emphasis he intends to make is to play Sibelius’s symphonic and tone poems which, even in Finland, are overlooked in favour of the symphonies. “I recently conducted The Bard and there are many more deserving attention.” Beyond Finland Storgårds considers Great Britain an important country, with its long Sibelius tradition and acceptance of modern Finnish music.

But his rock will continue to be the Lapland Chamber Orchestra based in Rovaniemi, on the Arctic Circle, where he and his wife have a second home. “I spent many years living in the Cumulous hotel whilst on concert duty. It seemed a good idea to put some roots down in this lovely community.”

His plans for the orchestra (and they are very much his own plans, different to working with committees in big orchestras) have some surprising twists. For instance, he has embarked on a Malcolm Arnold odyssey, playing many of the concertos with orchestra principals (including himself as one of the soloists in the Concerto for Two Violins). “Arnold’s music is perfect for this orchestra. We love to play it and audiences love to hear it. Although it exceeds our regular compliment of 17-21 players we will perform the Concerto for 28 Players soon!”

This typifies Storgårds’s attitude to music. He conjures up an amazing repertoire in Lapland with much more modern music than the classics, Martinů in Helsinki and Finnish music abroad, touring Sibelius’s Fourth Symphony in the UK during 2007. All show a questing spirit, one that makes him one of the most interesting conductors alive today.