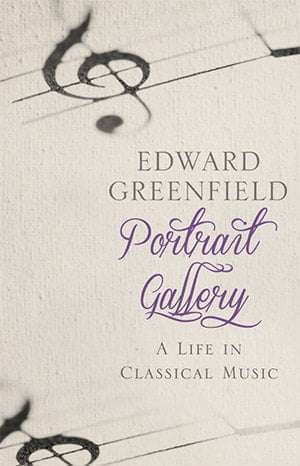 Edward (Ted) Greenfield has been at the forefront of musical criticism in the UK for 50 years and more – for the Guardian newspaper, for Gramophone magazine and as one of the triumvirate (with Robert Layton and Ivan March) that produced the much-loved Penguin Guide to Recorded Classical Music. Now, at the age of 85 (Greenfield was born in 1928 in Westcliff-on-Sea), he has written a Portrait Gallery of the people he has met, the places he has visited and the events he has attended.

In this charming and readable book – with an appreciative foreword from Sir Antonio Pappano – he firstly gives us his credo setting out his approach to reviewing, and then divides his descriptions into groups – conductors, fellow critics, composers, instrumentalists, singers, venues and record producers, as well as friends. Between these sections we get an “Interlude” in which he reminiscences about his life. The book is illustrated with photographs and paintings, some of which show Greenfield with many of the prominent people in the world of music.

Most of the Portraits tend to be short, while those to whom the author was particularly close or has a special admiration for are longer. Thus Leonard Bernstein, André Previn, William Walton, Joan Sutherland, and Jacqueline du Pré receive affectionate and detailed coverage – that of the final period of the cellist’s life is especially poignant.

Occasionally a little edge creeps in – I particularly like the story of Riccardo Muti who fell foul of the LSO on their first (and last) concert together hissing to the author “I hate the LSO!”. Greenfield’s initial impression of Jessye Norman seems to have badly deteriorated as time went by and we get a very downbeat view of her more recent activity. Although, on the whole, the anecdotes are fairly bland, there are a number, particularly in the section on people in the recording industry, where a welcome sharpness is present. The “Interlude” on life as a National Serviceman is particularly amusing, with some good tales on the perversity of Army thought-processes and obtuse reasoning.

Before he began his career as a writer, Greenfield on leaving Cambridge University joined the Guardian as a political correspondent and, with his socialist leanings, was able to meet many of the important figures in Parliament on the Left of the political divide. Many of the stories in this chapter relate to those figures. Greenfield’s dislike of Margaret Thatcher and Henry Brooke (the Conservative Home Secretary from 1962 to 1964) is made very apparent.

Greenfield has travelled to many of the great music centres and his recollections of Salzburg, Bayreuth, Sydney, Glyndebourne, Aldeburgh and many others are covered amusingly and with a real personal touch. His depiction of the Garsington Festival I found enchanting.

This then is an entertaining and enlightening book which shines light on corners we may never have the opportunity to otherwise visit and as such is a welcome addition to the library of musical experiences. There are though some factual errors that should have been spotted in the editing stage – in the Colin Davis and Peter Maxwell Davies sections, for example, and also concerning István Kertész. But, overall, this is a delightful read recommended to anyone with an interest in classical music – but do not be put off by the putty-tinted dust jacket, for the contents are much more colourful.