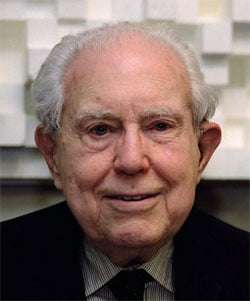 “You can’t keep a composer away from his music”, quipped Elliott Carter, explaining why he had travelled all the way from New York to Aldeburgh in rural Suffolk, where many of his works – and several premieres – are being played.

Bright and early on Saturday morning 20 June 2009, he spoke with Pierre-Laurent Aimard in the new Britten Studio. Carter has known Aimard since the latter was a boy, and has written many pieces for him, so this was something much more personal and intimate.

Carter walked into the room dressed in a natty suit, with bright-red polo-shirt and crimson socks. “Old age is liberating”, he said in an interview last December. “You don’t have peer pressure.” And so it is with his music, too, as individualistic as his personality.

Carter has now become famous for being old as well as being a composer. He is inspiring to everyone, musical or not. All Aldeburgh seemed to be buzzing about the “Hundred-Year-Old composer”. At the age of 100½, he’s lively and brighter than many a third his age.

And the publicity is good for music, too, because people may be drawn-in to listen. Carter’s music is more accessible than people realise. He told Aimard about a man who’d written to him after hearing one of his string quartets on the radio in the early 1950s. The man was a coal-miner, nothing fancy (coal was still mined in the US in those days). “I love your music”, said the man, “it’s just like digging coal!”.

So there are many ways into Carter’s music. Perhaps what keeps Carter so lively is that he is still inventive and creative. His “late, late style” as he calls it, is very different from the multiple layers of complexity he used to write. Now it’s as if he’s concentrating on fundamentals, getting straight to the essence of things, a sort of Zen-like purity.

Carter and Aimard discussed the two new pieces, commissioned by James Levine, not yet officially premiered. They extend Carter’s Matribute, premiered in Lucerne in 2007. Vaguely they relate to Levine’s brother and sister, so they are called Fratribute and Sistribute! This joyful, impish wit has long been present in Carter’s work, which throws those who think serious music should be deadly dour.

Fratribute is simple but steady, with sequences up and down the scale. Sistribute is altogether more sparkling, one hand playing triplets while the other plays four fingers. It is in a very high register, a kind of squeaky cantabile. Whether it reflects Levine’s sister or not, it is expressive, happy and spirited. “Typical Carter”, said Aimard, “like sparkling drizzle”. 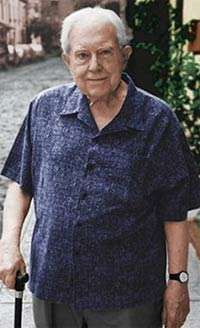 It is so new that Carter had not heard it played before in this way. “Not as bad as I thought”, he said when Aimard played it through. Previously he had spoken to Aimard about changing the dynamics so Aimard tried the amendments out then and there. “I think I like the original better after all”, said Carter. So we were witnessing Sistribute at its very moment of inception. At one point, Carter got up and played the piano himself. “Not as good as you,” he grinned at Aimard.

More typical Carter puzzles in Retrouvialles, written for Pierre Boulez in 2000. It takes up the ideas in both Esprit rude/esprit doux, written for Boulez’s 60th- and 70th-birthdays. Embedded cryptically into it are the letters of Boulez’s name. “Two personnages”, said Aimard, describing the way the two voices dialogue “like Bach”. Which is a good point, since Carter and Boulez have been close friends for decades and Carter’s love for baroque polyphony goes back to his days at college.

Then 90 Plus, Carter’s tribute to Goffredo Petrassi, written for Petrassi’s 90th-birthday in 1994. Ninety staccato notes that tail off rather than end, wishing Petrassi long life to come.

In the evening, Carter’s On Conversing with Paradise was premiered. It is a commission for Aldeburgh and was conducted by Oliver Knussen, another intimate of the Carter circle. The Birmingham Contemporary Music Group knows Carter’s idiom well, so there was top-notch playing, from the mysterious horn opening, punctuated by profound thwacks of timpani, to the full, dramatic crescendo towards the end.

The text comes from a poem by Ezra Pound, whom Carter met many years ago: “People called him mad, but I didn’t think so”. The soloist was the baritone Leigh Melrose. It is not easy to judge a piece the first time it is heard, but the texts are so amazing that I felt it might be even better with a voice with more authority to stand up to the powerful orchestral writing.

This is a compelling work, whose title comes from Blake and includes parts of the Pisan Canto 91 and the unfinished Canto 121 where Pound states: “I have tried to write Paradise”. Most of the page is left blank. Then, simply, Pound says: “Do not move. Let the wind speak that is paradise.”

Carter’s settings of poetry have often recognised the importance of blank space on texts, and the way lines fragment and roll-over the printed page. This is perceptive, because these devices are essential parts of the poem. Pound despairs of being able to write paradise in a perfect poem, so he breaks off elusively and suggests listening, instead, to the wind. As Carter said, earlier in the day: “maybe silence is the answer, and also the biggest question, too?”.