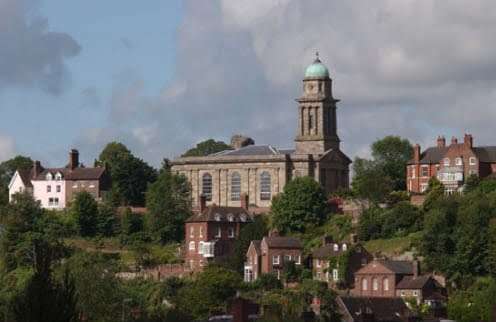 For a quarter of a century the English Haydn Festival has used the deconsecrated St Leonard’s Church in Bridgnorth as the principal venue. In this twenty-sixth season however St Mary Magdalene was used and proved to be a better location because the acoustics are superior, being more resonant without hindering clarity. Unfortunately, a Sunday service meant that the Festival was reduced to four days although an additional lunchtime concert on the first day was some compensation.

Since becoming principal conductor, Steven Devine has employed an experimental orchestral layout which involves the wind-players being divided and standing at the edges of the platform – upper winds behind first violins and brass behind the seconds. On discussing this with members of the audience last year I concluded that the ‘jury is still out’ but the new venue has brought the matter into closer focus. Seats being unreserved, I varied where I sat. In the stalls (or more properly the pews) a rich yet admirably clear sound was evident, but listening from the gallery, winds and strings were warmly blended – the type of balance heard in the days when Haydn used to be played by full-sized orchestras. In particular the oboes made little impact and the far-right horns were unclear as their sound bounced off the pillar behind them; therefore, judged from a distance, the experimental layout did not convince. There was however a great deal of conviction in Devine’s performances.

Last year I differed with the conductor concerning two notes when I queried their omission at the end of a Minuet; I concede that a fermata is in the score on the first beat but I wondered about the advisability of observing it. This time I found a similar problem during an invigorating account of Symphony 47. Here was strong, forthright Haydn with an exhilarating rapidly-paced Finale. In the autograph score, Haydn headed the third movement Menuet al roverso and wrote down only the first ten bars leaving the Minuet to be completed by playing the same music backwards. He did the same with the Trio. Regrettably at the end of the movement, Devine left out the last two notes on cello and bass, therefore the restatement of the Minuet after the Trio was no longer an exact palindrome and Haydn’s highly original joke was undermined. 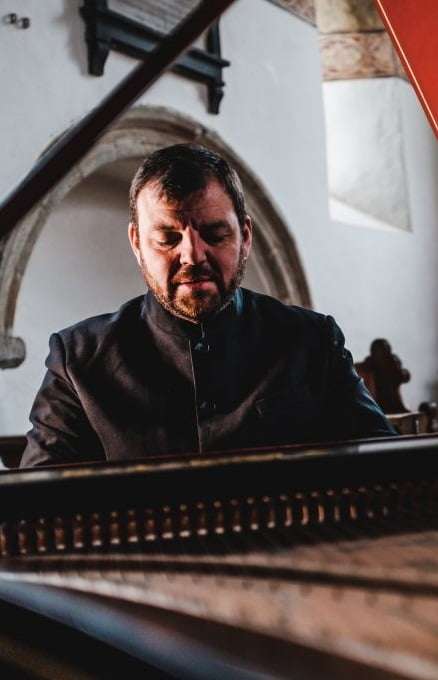 All the remaining Symphonies were performed immaculately with ideally chosen speeds and great rhythmic impulse. As with #47, No.60 was directed from the harpsichord; there was no holding back in sudden forte passages and both slow movements were performed tenderly. An unusual approach was taken to the brass parts. This is one of Haydn’s Symphonies in which horns in C-alto make a thrilling sound. Apart from the Andante second movement which requires only horns in G; the score lists two horns in C-alto and two trumpets. These parts are identical and some conductors choose to have the trumpets play only in fanfare-like moments – sometimes trumpets are left out altogether. Devine took the unusual course of employing just trumpeters for the brass parts and they took up horns for the second movement. The sound of trumpets is less exciting than hearing horns in the same octave but this remained a convincing ‘period’ reading.

Sensitive and exceptionally expressive was the nature of Symphony 91. At first I wondered about the precision of the horns but I think it may merely have been the reflection of their sound from the stonework, for their accuracy in the important high B-flat parts during the Andante was impressive. At one point the isolated combination of oboes and bassoon did not quite meld but since, because of the layout, they were eight yards apart, this can be forgiven and the high-speed Finale completed a delightful performance.

The two later works were driven given powerfully. The ‘Oxford’ (#92) was notable for the beauty of its Adagio cantabile and the steadiness of the louder sections made it all the more dramatic. An ideal tempo was chosen for the Minuet and the surge into the Trio strongly underlined Haydn’s humorous device of having the horns enter seemingly on the wrong beat. The English title for Symphony 103 is ‘Drumroll’ because of the initial attack of the timpani, but Haydn merely wrote Intrada over the first bar for kettledrum with no other instruction. Here the drummer provided a military tattoo and on the return of the solo near the close of the movement it was played quietly, an entertaining interpretation of what Haydn meant. The Symphony was performed as large-scale Haydn. There was gracefulness in the Andante più tosto allegretto with a superb violin solo from Simon Standage and in the Trio the clarinets, though modestly employed elsewhere, came into their own. The standard version of the Finale was played – it omits thirteen extraordinarily mysterious bars before the coda, but as an encore Devine led the original, even more dramatic, enhanced by forceful timpani playing.

Naturally the Symphonies were the most important works to be played at the Festival but there was also admirable representation of Haydn’s contemporaries. His pupil Ignaz Pleyel was represented by a very fine D-minor Symphony, large in scale and with an interesting pattern wherein serious melodies were sometimes followed by a quaint counter-theme which seemed to mock the original idea. In the same concert the Overture to Handel’s Acis and Galatea was played in Mozart’s arrangement. The inclusion of clarinets made it sound unlike Handel although the music remained enjoyable – it reminded me of Hamilton Harty’s Handel re-orchestrations. This was followed by Wilhelm Cramer’s joyful La Chasse for violin and orchestra with Standage as soloist. The horns have much to do; they played genuine hunting-calls and at exciting moments permitted their instruments to make a braying sound.

Carl Philipp Emanuel Bach was represented by two of his Symphonies from Wq183. The lyrical No.3 was interpreted with tasteful expression; the challenging No.1 was given an ideally fierce reading. In both, Devine’s harpsichord gave bite to the bass lines. In between, Mark Baigent gave a stylish performance of Dittersdorf’s G-major Oboe Concerto – calm rather than passionate in nature with immensely suitable cadenzas perfectly in style – I know only of Plamen Prodanov’s from 1958 so maybe these were Baigent’s own.

Two contemporary Sinfonia concertantes were represented. Viotti’s for two violins, played elegantly byStandage and Ada Witczyk. There are two lengthy movements, the themes do not hold the attention but the orchestral colouration, enhanced by high-horn writing, is interesting. The horns also play a big part in J. C. Bach’s E-flat Concertante although the nominated principals are flute, oboe and bassoon – two calm movements skilfully performed but this is not one of the composer’s more striking creations

Chamber music was well attended to. The opening concert in the delightful church at Acton Round featured an extensive introductory talk on Haydn by Richard Wigmore followed by String Quartet Opus 17/4 played expertly by the English Haydn Ensemble, led by Standage. In the main venue of St Mary’s, the raised platform assisted the Denner Ensemble (oboe, violin, viola, cello) in projecting into the spacious acoustic. Haydn’s String Quartet Opus 50/5 sounded rather strange in this arrangement. Vanhal‘s F-major Quartet had a more homogeneous quality and the Minuet was so smooth as almost to eradicate the feeling of the dance. By contrast Mozart’s Oboe Quartet was superbly expressive, Baigent shaping the melodies with great sensitivity.

Later the same day, the Consone Quartet displayed a deep understanding of Haydn’s melodic invention when performing ‘The Bird’ and ‘Rider’. The playing of the themes was totally convincing; often the musicians would relax at ends of melodies in order to enhance the statement of a new idea and their perfect judgment of the space allowed between the themes meant that forward impulse was never impeded. The very broad tempo taken for the second movement of ‘The Bird,: surely the darkest and most serious Scherzo that Haydn composed, resulted in a moving experience. The ‘Rider’ was treated in similar fashion and concluded with a fiery yet entirely accurate reading of the Finale. Just one thing fell short of near-perfection: a spurious da capo after the Trio sections of both works which spoilt the symmetry of these movements. The concert ended with a powerful reading of Beethoven’s ‘Harp’ Quartet and as an encore an elegant movement from Boccherini. Boccherini also featured when Standage brought his Salomon Quartet to an out-of-town church concert at nearby Morville, but it was not until the Salomons played Haydn’s Opus 33/1 (deemed “highly unsettling” by Wigmore) that their forthright style was fully exploited.

It was adventurous to present Music by Pleyel and Woelfl in a recital by the English Haydn Trio (Devine, Standage and Pavel Serbin). The fortepiano was more clearly audible in St Mary’s than in previous Festivals and although neither of these works proved to be a masterpiece, Haydn’s Trio 25, which ends with the ‘Gypsy Rondo’, was presented with skill and understanding, swiftly and powerfully driven.

Congratulations to the management for continuing EHF so successfully despite the serious hindrance of losing the long-established main venue. I hope it will be possible to add at least one more day to future Festivals.