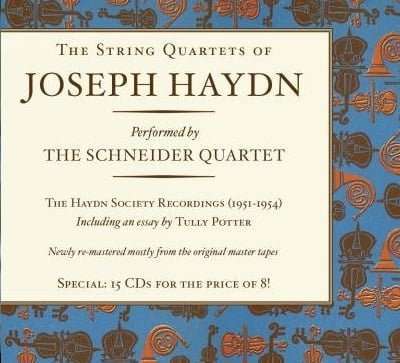 Haydn
46 String Quartets plus The Seven Last Words of The Saviour on the Cross and two movements from Op.64/1

The Haydn Society Recordings, made between 1951 and 1954 in New York City

In the first part of the twentieth-century it was not uncommon for string quartet ensembles to adopt a flexible and very subjective approach. It was perhaps a between-Wars phenomenon but interpretative philosophy gradually changed and by the late 1930s we find groups such as the Calvet Quartet still playing expressively but becoming more objective with regard to music’s structure. Similarly, formed in 1919 and continuing until 1951, the members of the Busch Quartet were great masters of their art and apart from reportedly employing portamento more freely in their earlier years they were far more ‘classical’ in their approach than were their contemporaries. The Schneider Quartet followed similar principles and was founded by Lithuanian violinist Alexander Schneider (1908-93) who led from 1951 with colleagues Isidore Cohen, Karen Tuttle and Madeline Foley, and there is an interesting link with the Busch Quartet because in 1953 Hermann Busch replaced Foley as cellist. He is to be heard in the recordings of Opuses 2, 20, 33 and 76. 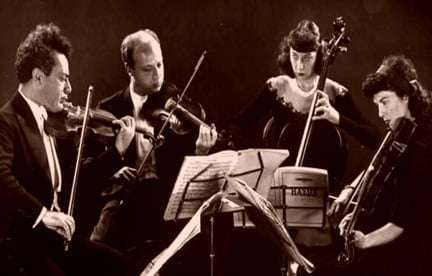 The Schneider Quartet seemed well aware of the period in which each of these Haydn works was composed so earlier pieces are notable for the crisp liveliness of the readings while full understanding of the dramatic implications makes the later scores enthralling. The set begins with the so-catalogued Opus 1/0. This was neglected for years simply because the 1764 edition by Chevardière omitted it. Other publishers corrected the misapprehension (Hummel, Bremner, and Longman & Broderip). These early works were popular in England and there is a tribute by the English composer John Marsh entitled “Quartetto in B flat in imitation of Haydn’s Opus 1”.

We know that when Haydn’s publishers printed his final String Quartet he insisted that it was No.83 and Hoboken’s catalogue lists his works accordingly. It is true that this total is arrived at because of the vagaries of the publishers – for example the string-quartet arrangement of The Seven Last Words of The Saviour on the Cross with each movement as a separate work – but Haydn was well aware of this. Similarly there is a tendency for Opus 2/3 and Opus 2/5 to be ignored because they include two horns, as heard from Schneider. These are not easy parts to play, but with Weldon Wilber and Kathleen Wilber they are done so immaculately and the recording balances them very well.

At this stage Haydn’s true technique had not fully emerged and he said that the first of his Opus 9 collection should be regarded as marking his personal development. Unfortunately the Schneider Quartet did not record Opus 9 but Opus 17 at once shows a stylistic advance. At this period Haydn began to infiltrate fugal elements into his finales, first movements became tauter and had development sections that were more dramatic than hitherto. On the UK LP pressings of Opus 17 the sound was rather thin and dry but here it is certainly very acceptable. There is more resonance on the compact discs and clarity is retained. With the Schneider members the finales of this opus really fly yet details remain in focus.

Although composed only one year later, the Opus 20 set – nicknamed ‘Sun’ because of the illustration on the cover of an early publication – is further advanced, especially in the use of fugal techniques. Surely the gem of the set is No.4 with its wonderful ‘Hungarian’ Minuet. How splendidly these musicians surge into the Trio whereas often this can be a ‘going to sleep’ moment. The most remarkable example is in the finale of No.6 which is both mysterious and amazingly Bach-like and its performance here is a model of superbly precise playing.

Opus 33, published ten years later than Opus 20, shows another further advance. Haydn referred to the works as being composed in “an entirely new and particular manner”. He uses the Scherzo as the standard dance movement rather than the Minuet and in 1 to 4 he places it second. No.2, the famous ‘Joke’ Quartet with its hilariously indeterminate ending, is superbly done and the humour is all the more effective for being presented with no inflection or underlining. The other particularly bright star among this glittering set is the ‘Bird’ Quartet. This is given a wonderfully sensitive performance and the Scherzo is remarkable because, with extraordinary insight, it is played extremely slowly and becomes withdrawn, ghostly and immensely serious. Because both repeats are made in the first movement of No.5 it makes a particular point because the opening flourish is not required at the first da capo yet it appears again twice thereafter (in the Eulenberg score from 1930). Following No. 6 on this disc, the much neglected Opus 42 Quartet is given great stature; indeed the gentle first movement which is quaintly marked Andante ed innocentemente is rather moving.

With Opus 50 we have strong, forthright readings, close to the approach of the Aeolian Quartet whose recordings kept coming to mind. I enjoyed full value being given to the surprising pauses in the first movement of No.3. In No.4 Haydn returns to using a fugal finale and this work is given one of the most serious interpretations that I have encountered, underlining the fact that we need not expect Haydn to be cheerful at every moment. For depth of understanding and gentle sensitivity I find the performance of the Poco Adagio of No.5 unsurpassed.

Opus 51 is an arrangement of the Seven Last Words and is better known either as a fine set of orchestral pieces or as a superb oratorio. Haydn was entitled to have different versions published – after all he needed to make a living – but though beautiful, his quartet arrangement of this sequence of slow movements never seems to make much impact: rather a trial for the listener I feel. It is well played but I was grateful that none of the repeats was made.

In this collection there is a big gap before the final great collection of String Quartets but when returning to the original tapes, restoration engineer Lani Spahr discovered and edited the outer movements from Opus 64/1 which were recorded in October 1954 and had lain unused – a fine bonus and well worth hearing despite the incompleteness.

The readings of the six marvellous String Quartets of Opus 76 are superb and challenge all other recordings that I have heard. There are particular moments that catch the attention. How sensitive is the rendering of the slow movement of No.1 and how refreshing that for once the Presto Minuet avoids being madly fast, therefore there is none of the disturbing slow-down for the Trio. In No.2 – the ‘Fifths’ Quartet – the Minuet is wonderfully dogged and Schneider’s extraordinary upward portamento sweep at the end of the first theme of the finale (bar 8) is a great moment to savour. The sensitivity of the ‘Emperor’s Hymn’ in No.3 where the limpid flow fully justifies the slower than usual tempo is typical of this ensemble’s sensitive understanding of Haydn. In No.4, the eponymous opening ‘Sunrise’ is truly magical as is the hushed preparation for the coda. In No.5 the firm, confident Minuet typifies the strength of this group’s approach to such movements but it is the Trio that is so delightful: here is superb cello-playing from Busch, it is as if a kindly grandfather were comforting young listeners so that the dark minor-key may not disturb them. In the Adagio of No.6 do we perhaps begin to perceive Haydn nostalgically looking back over his career? This is sadly-beautiful music, expounded with the greatest of sensitivity.

The two String Quartets Opus 77 (1799) are the utmost in maturity. Immaculate rhythmic certainty from the performers makes the remarkable combination of joy and nobility in the opening movement of No.1 quite an experience. I would however have welcomed the second repeat of the Minuet after the Trio being made because Haydn wrote out the first one in full – I was once given a transfer of this work taken from an LP and the repeat is there. No.2 springs confidently into life but by the time we reach the quiet, ghostly Trio of the Minuet, sadness begins to return – lovely hushed playing here and a preparation for the flowing Andante which is lovely if sorrowful. This is also true of the Andante grazioso of Haydn’s final String Quartet (Opus 103). Could it be that the listener’s knowledge of the composer’s distressing decline which prevented him from completing the work gives this feeling?

These refurbished recordings now sound very clear; there is no great resonance but every detail can be heard. There is however an interesting difference when comparing the original LPs. Schneider made all repeats until about Opus 17 but almost all repeats were absent from sonata-movements thereafter. I have long suspected that this was because of the limits of LP side-lengths and was gratified to find that Emanuel Hurwitz who recorded all the works with the Aeolian Quartet and knew Schneider and his interpretations well, also believed that these omissions were not part of the original concept. On this Music & Arts set Schneider’s repeat patterns are now entirely satisfactory – no exposition repeats are lost and many that were once missing have been restored.

The 46 String Quartets (plus Seven Last Words and the two movements of Opus 64/1) presented here are given magnificent performances by a group of musicians that have an innate sense of correct tempo, a vital aspect of the interpretations; once a speed is set it remains firmly in place. This set, including an essay by Tully Potter, provides a touchstone of Haydn interpretation.