This LP feature is different to the norm in that, as was done with the recent Rattle/Berlin Philharmonic Beethoven Symphony cycle, the orchestra has also provided digital downloads of the two featured sets, so here the comparison is one of analogue versus digital, as opposed to LP. 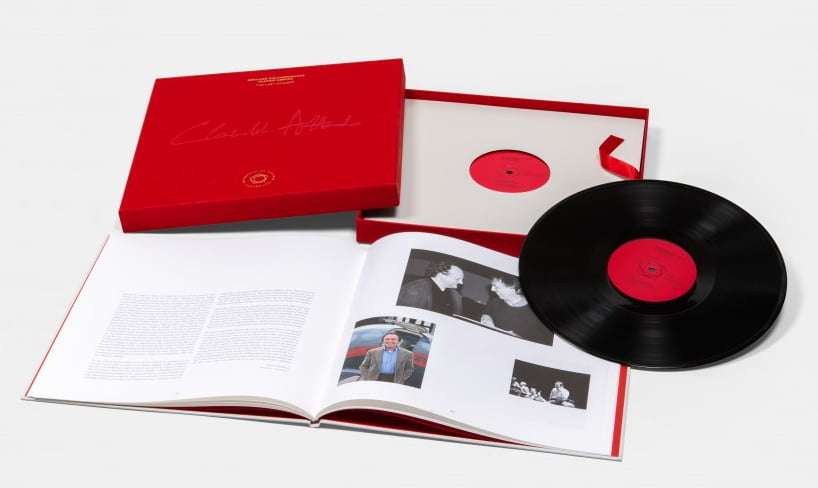 As he got older, and especially after his recovery from cancer, Claudio Abbado seemed to be viewed in some circles as a semi-divine figure who could do no wrong, and this luxury edition, commemorating his final concerts with the Berlin Philharmonic, features a forty-page book full of reverential hyperbole, which the performances do little to justify. It opens with music from Mendelssohn’s A Midsummer Night’s Dream, where the Overture dances elegantly by, with – as elsewhere – some very suave string- and woodwind-playing and a quiet sense of melancholy in the coda. The Scherzo bounces smilingly along at a moderate tempo and in ‘Ye Spotted Snakes’ the singing is feathery light, the melodic line smoothly moulded, but more tempo variation and rubato – à la Peter Maag and the LSO (Speakers Corner LP, Decca SXL2060) – wouldn’t have gone amiss; in the Intermezzo and Nocturne, Abbado produces carefully balanced layers of beautiful, emotionally sterile sound, while the Wedding March and Finale are nothing special when compared to Maag whose bride has a real spring in her step.

After the interval Abbado turned to Berlioz’s magnificent Symphonie fantastique. Here the introduction to the first movement is devoid of tension and the main Allegro lacks Jean Martinon’s coruscating drive with the French National Radio Orchestra (HMV ASD3263). In ‘Un bal’ Abbado goes for lightness of touch and textural clarity, but the way Martinon phrases the big waltz tune makes Abbado sound mundane. Things improve in ‘Scène aux champs’ where the cor anglais and oboe are superb; however in the ‘Marche aux Supplice’ the rhythms don’t bite, the brass don’t snarl, so it is difficult to believe the guy is going to be guillotined. Much the same happens in the ‘Witches’ Sabbath’, which starts out well with sepulchral bells, but the performance then plods forward into an underpowered account and despite some unusually transparent textures there is little sense of the macabre or orgiastic abandon. 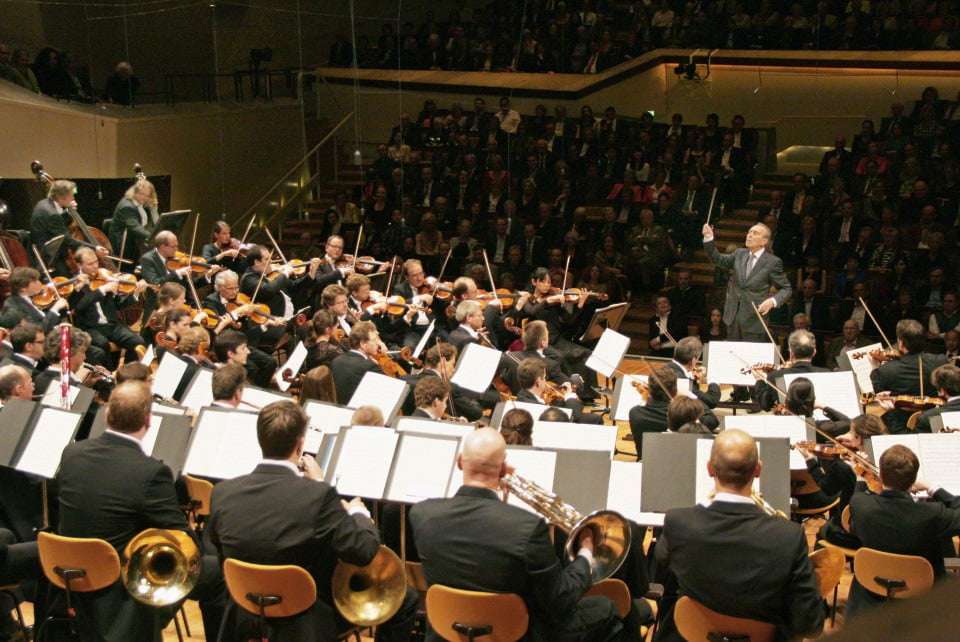 In terms of presentation the LPs come in a beautiful red, textured box, with gold lettering. Inside there are three records so you don’t get the problem of excessive side-lengths – and thereby heavily compressed sound – in the Berlioz and the red-lined LP sized hardback book comes replete with numerous photos, extensive programme notes and two appreciations of Abbado. Unfortunately despite being recorded in 2013 the concert was only mastered in 24bit/48kHz, which means you don’t get the definition and presence found on the orchestra’s 24/192 set of the Beethoven Symphonies conducted by Rattle. The LPs are however superior to the high-resolution download having a richer, more natural sound (the singers and timpani in particular benefit from this) although there is some midrange congestion. Balance is pretty good on both formats, the image being middle-distance, in solos the woodwind aren’t unduly highlighted, but as on every live recording from this source the horns at anything less than forte are amorphous and the dynamic range is no-more than adequate. It is also a sobering thought that in February 1957 at the Kingsway Hall, Decca captured far better sound for Maag. 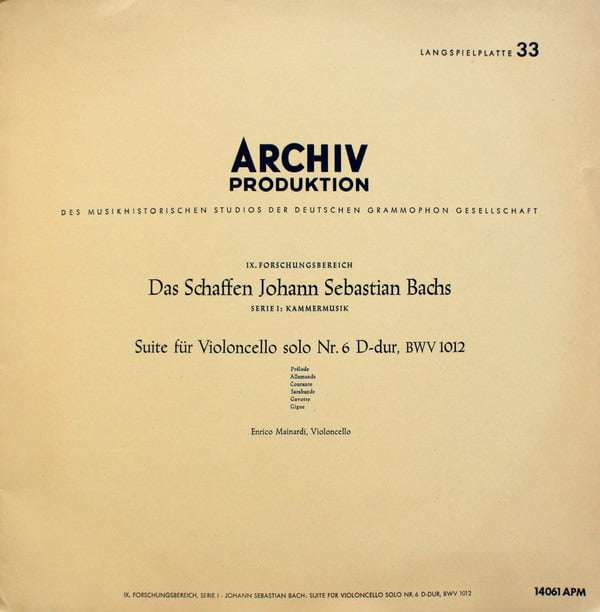 The Italian cellist Enrico Mainardi (1897-1976) is nowhere near as well-known today as say Pierre Fournier, Maurice Gendron or Janos Starker, golden-age players who also recorded the Bach Cello Suites. Part of this neglect is probably down to him having recorded virtually nothing in stereo, and when he did – such as a second version of the Suites – it was for the less-well-known label Eurodisc. However, his DG mono LPs are highly sought after and if you wanted to buy the three 12” and sole 10” discs you would need to spend up to £4,000, and even an earlier limited edition 180gm remastering fetches over £1,000.

Interpretively the Suites bring out the best in just about every player who essays them and in addition to the classic accounts (with multiple versions by Fournier and Starker), most collectors will have Casals, Tortelier and perhaps Bylsma’s second version. With Mainardi the first thing you notice is that the tempos are often very leisurely (hence the four as opposed to the more usual three discs). Mainardi cultivates richly upholstered textures and elegantly sculpted, often highly romantic, singing, melodic lines, but can – as in the opening movement of the First and concluding Gigue of the Third – apply relatively light bowing and variable vibrato.

Unfortunately, though, they are far too many occasions – such as the second half of the First and entire Second and Sixth Suites – where there is a sense of torpor and rhythmic heaviness which means the dance elements are lost.

In terms of the sound a first-label copy of 14044 APM was used for comparison and as is usually the case with Analogphonic the overall balance is very much the same, the tonal balance similar, but the bass has greater definition and extension, the treble is richer, and there is greater presence. So for a fraction of the price (around £130) you get better sound, the discs – which are all twelve-inches – are housed in an elegant box, replete with the original card inserts giving the edition used, timings, recording personnel and the like. 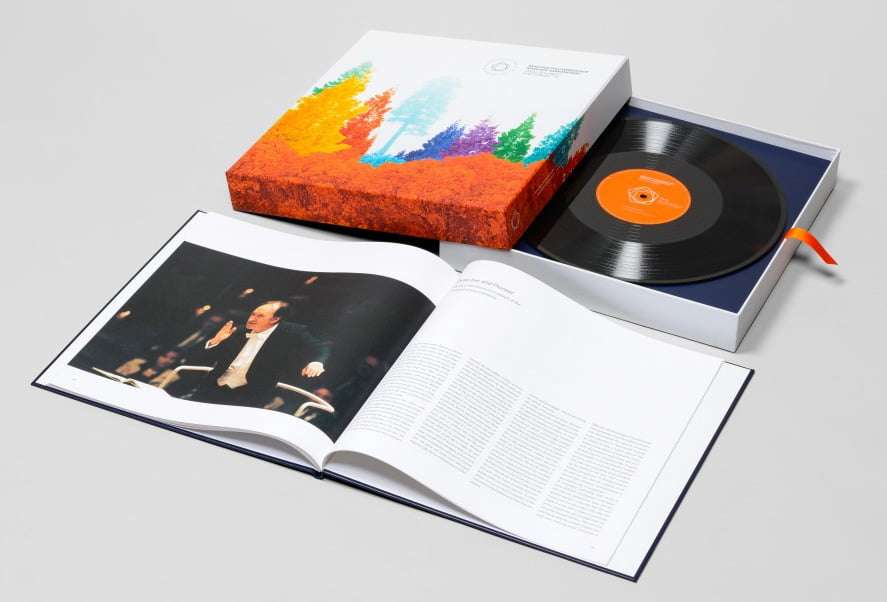 Nikolaus Harnoncourt is rightly remembered as one of the pioneers of early-music performance and practice, but later in his career he made a series of recordings of the core repertoire with major European orchestras including in 1992 the complete Schubert Symphonies with the Concertgebouw, which because there is no No.7 was rather annoyingly numbered – as here – 1 to 8. These live Berlin Philharmonic versions date from 2003-6 and the vocal music is only available as a download. As you might expect in both sets Harnoncourt sought to emulate period performance by largely eschewing vibrato, using hard drumsticks, antiphonal violins, observing staccato and sforzando markings, crisply defining the rhythms, taking all the repeats and often achieving exceptional clarity by paying fastidious attention to internal balancing.

Speeds – with one major exception – are forward-moving, but he usually takes his time in slow introductions, makes unwritten tempo changes (witness the huge rit before the first movement recapitulation in No.1, the faster second section of the Allegretto of No.3 and leisurely Trio of No.4) and is in no hurry in Minuets and Scherzos. In the first six Symphonies all of this is used for expressive purposes, so nothing comes over as being didactic, there is a tangible sense of power, concentration and flair, all of which when combined with the richly upholstered playing – which no amount of authenticity can hide – gives the music-making a decidedly old-world feeling, which is all to the good. However in the first movement of the ‘Unfinished’ things go awry. Here the brief introduction and first subject are ponderous, the phrasing overly Brucknerian, Harnoncourt slows even further for the second theme and as a result the performance loses focus and impetus.

In the Great C-major Harnoncourt adopts a fast tempo in the introduction and a more classical style in the main Allegro, but here there is a lack of sustained tension. He gives an eloquent account of the march-like Andante con moto, subtly varies the pace in the Scherzo (which is very long with all the repeats in place) then slows for the Trio, which lacks energy and while he springs the rhythms in the Finale, the inexorable drive of conductors as diverse as Barbirolli (ASD2251) and Solti (SXDL7557) is missing, while the diminuendo on the last chord (which may be down to a misreading of the manuscript score) is extremely irritating.

Turning to the vocal music: it always comes as a surprise given Schubert’s consummate genius as a song-writer that he was incapable of writing choral and operatic works of similar quality. So here while both the Masses have their moments, there is a lot of note-spinning. Harnoncourt delivers forceful, committed readings of both works, but Wolfgang Sawallisch (SLS 1436073) with larger Bavarian Radio forces and a tremendous line-up of soloists is even more powerful and while the opera Alfonso und Estrella opens with a delightful choral scene, the rest is pretty mediocre.

Back in 2003 when the Teldex Studios started recording these works in high-resolution sound was still in its infancy and to use 24bit, 48kHz as opposed to the even more unacceptably compressed 16bit, 44.1 kHz format found on CDs wasn’t going to make a huge difference. So in say the first movement of D200 on both LP and download you have the usual low-res digital void where there is no sense of acoustic space around the performers. On both the overall balance is forward – although somewhat unusually it is even more so on the LPs – and the image lacks true depth, which again is entirely typical of recordings of the period, so the chorus rather than being to the rear of the orchestra is above it. With regard to instrumental timbres, even on the vinyl, you are aware that this is a digital approximation, the dynamic range is reasonable (although the level is higher on the LPs) clarity and definition are good.

If asked to choose between the two then the vinyl, as is usually the case with early digital recordings, works as a civilising influence and the sound has greater weight and presence. But – and it is a big but – the difference in price is huge, the download costing €59, the LPs (which includes the high-resolution download) €199 plus shipping. The latter though do come in a beautiful box and you get the full-size book.