Sara Mohr-Pietsch: Introduction to the music of Arvo Pärt

Film: 24 Preludes for a Fugue 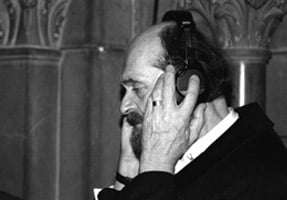 As Sara Mohr-Pietsch pointed out, regarding Estonian Arvo Pärt (born 11 September 1935), this Total Immersion day was different to the others so far in this series in that Pärt’s music is already well known. Indeed only two works on the programme were from recent years – The Deer’s Cry (2007) and his present to Paavo Järvi, Silhouette (2009). Yet Mohr-Pietsch’s contention was – given the proclivity of documentary makers (particularly about the Holocaust) to use Pärt, or copycat Pärt, on the soundtrack – that we might not fully comprehend (or might have lost sight of) Pärt’s seriousness of purpose and importance.

Mohr-Pietsch argued that Pärt is a “process” composer, and all his works since his period of silence (from 1968 to 1976, with the Third Symphony of 1971 his only major composition, which certainly looks to his later pared-down style), have engaged with his process of tintinnabulation. A clutch of works from 1976 to 1978, the first tangible results of his re-emergence, are testimony to how his new style has appealed to audiences. There was Für Alina (written for an Estonian girl living in London) and Spiegel im Spiegel in the first concert, Trivium for organ and Summa in the second, and the final concert ended (in its re-arranged running order) with Tabula Rasa – the double violin concerto, here taken with fervour and exactitude by Alina Ibragimova and Barnabás Kelemen.

But while Pärt’s tintinnabulation has struck a chord with the public, and ensured that – perhaps a first for the Total Immersion series – what looked like a sell-out through the whole day, we also heard an example of his early, iconoclastic style in the shape of the First Symphony, from 1963/4. Nine hours earlier Mohr-Pietsch had set her audience a test – could we recognise Pärt’s music from a series of three works we hear the openings of. The fanfares and percussion of Pärt’s First Symphony are not far from Louis Andriessen’s Workers Union or Harrison Birtwistle’s Verses for Ensemble – and begs a wider question why we rarely get to hear live not only early Pärt, but also fellow eastern-European symphonic works by such as Lutosławski and Panufnik…

Even in its crunching directness, the First Symphony, with its small wind and brass requirements (one each, save for horns) already displays an interest in early music – it is called ‘Polyphonic’ and both its movements have contrapuntal elements. In Tonu Kaljuste’s finely conducted performance, it was paired directly in the first half with the Third Symphony, the intermediary work from the eight-year silence, where Pärt was seriously affected by his absorption in plainchant, for the last time using huge percussive forces for hard-edged climaxes. There was a dividing work between the two symphonies: the light-footed waltz for Paavo Järvi’s assumption at the head of Orchestre de Paris. Scored, as much of his later orchestral works are, just for strings and percussion, it is a delightful piece, with an infectious pizzicato section, Pärt letting his hair down.

The bulk of the day’s works featured Pärt’s sacred music; his distinctive tintinnabuli style going hand-in-hand with a deep religious contemplation. There were nine such works, eight given by three different choral groups, with Stabat Mater pared-down to three singers and three instrumentalists. Pärt’s settings are direct, utterly heartfelt and honest, reduced to what seems like simple lines, but harmonically detailed and contemplatively rapt. One might not share his religious sensibilities, but there can be no denying his musical aptitude. In the lunchtime concert, the student Guildhall Consort – a collaboration between the Guildhall School and The Sixteen – were equal to the BBC Singers, a good indication of the future quality of choral singing in an era of exceptional British choirs. The non-liturgical settings of The Deer’s Cry were particularly likable – establishing the repeated mantra “Christ with me, Christ before me, Christ behind me” from the Lorica of St Patrick (circa AD 377) –, as were the similar repetitions in the elaboration of Jesus’s family-tree in …which was the son of… from the Gospel of St Luke, which closed the second St Giles recital.

The day also included Dorian Supin’s thoughtful film profile of Pärt, made over three years and released a decade ago. 24 Preludes for a Fugue unfolds slowly, with 24 segments each with a specific title, including rehearsal footage, interviews – Pärt as careful and deliberate in speech as is his music, but often witty – and shots of him at home and in places of importance to him. The film, rather elliptical, ends with a recap of each of the segments with a short explanatory caption setting the scene in context. Curiously it would be interesting to re-watch the film in the light of this late summary, as there were some fascinating insights: the picture Pärt conjures-up of him cycling round-and-round a telegraph pole from which he could listen to concert broadcasts (he says he must have looked very odd, but at the time thought it would have looked even odder if he had just stood under the telegraph pole!), and the rather poignant opening of a cabinet at home to look at the copious sketchbooks from the time of his self-imposed silence, proof that he was busy forging his new style.

The final concert ended with Tabula Rasa – the “blank slate” from which Pärt developed his born-again compositions. It is surely one of his best-known works, and deservedly so, with his uncanny ability to create music that is modern, but which seems to resound across history. The piano replaces percussion in creating the atmospheric tolling for the string orchestra and two soloists to oscillate and play-off one another in the contrasting pair of movements – the baroque-like ‘Ludus’ before the still, repeated slow canon of ‘Silentium’. Alina Ibragimova and Barnabás Kelemen were energetic in the former and rapt and complementary in the latter.

Just prior to Tabula Rasa was Berliner Messe (originally, like Stabat Mater, for solo voices, and, in this case, organ). Kaljuste (founder of the Estonian Philharmonic Chamber Choir), moulded the four vocal ranges with expressive hands and the BBC Symphony Chorus rose handsomely to the occasion, accompanied by the strings of the BBC Symphony Orchestra. Pärt interpolates two sets of ‘Alleluias’ and ‘Veni Sancte Spiritus’ into the traditional Mass setting, encapsulated into 30 minutes (despite his trade-mark slow tempos, Pärt is a concise setter of texts).

So, another supremely successful Total Immersion day. There was also a foyer performance with the BBCSO Family Orchestra playing a Pärt-inspired new work, which mixed the expansive resources needed for the Third Symphony with a milieu closer to his later style, alternating resonant drum and tubular bell chords with – reversing Pärt’s downward scales – upward ones.