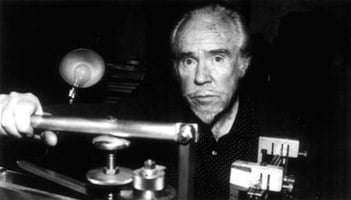 Conlon Nancarrow (1912-97) was one of those particularly individual mavericks that America is so good at producing. His art was crafted from the artifacts of Americana: a fusion of jazz, blues and American classical, and of the philosophy of mechanisation on which twentieth-century America was built. Ironically, he lived most of his years south of the border, in Mexico City, as a casualty of one of the United States’ other venerable traditions: the witch hunt. The communist leanings that took him to fight Franco in Spain put him dangerously out of step with the post-World War Two climate, but his subsequent self-imposed exile gave him the distance to pursue his own ideas. In the isolation of his sound-proofed studio, he transformed the player-piano from a genteel home-entertainment system into a raging beast capable of realising the strictest of rhythmical designs.

He bought his first player-piano in the late 1940s – a second followed, to make a pair in his studio – and the instrument allowed him to dispense with human musicians, previously the unreliable element in the equation. He became fascinated by Henry Cowell’s system of rhythmic relationships, proposed in the book New Musical Resources. The system treated rhythm like harmony and the player-piano was the perfect tool to perfect the technique. Nancarrow worked with long rolls of paper, setting out templates for Cowell’s exacting tempo relationships. There followed the notation, written onto the rolls, and finally the hole-punching. What the player-piano offered was the perfect reproduction of parallel rhythmic planes, phasing in an out in any ratio that Nancarrow desired.

The canon became the standard structure: Nancarrow wanted to make his rhythmic patterns as understandable as possible and reasoned that a listener would have less difficulty if it was the same ‘melodic’ material operating across the board. With no human musicians involved, there were almost no physical limits to what the composer could achieve; only the number of holes that could be punched into the roll before it fell apart. Nancarrow was able to jettison the notion of virtuosity: there was ultimately no difference between five hundred notes or five heard in ten seconds. 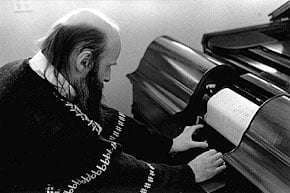 The effort involved in producing the rolls, though, was extraordinary. Opening the Southbank Centre’s weekend-long centenary tribute to the composer, James Greeson’s film, Conlon Nancarrow, Virtuoso of the Player Piano, included shots of Nancarrow making his minutely planned perforations, a painfully slow process that could take up to a year to complete. Greeson’s excellent introduction to the composer (frustratingly screened in the wrong aspect ratio) recapped his biography, met friends and family (some of whom made appearances in the flesh later in the weekend) and poked around Nancarrow’s home and studio. Snippets of the Player Piano Studies gave a taste of what was to follow: an exhaustive survey of the complete studies, introduced by the magnificently bearded pianola expert Rex Lawson and Nancarrow specialist Wolfgang Heisig.

Lawson and Heisig established something of a double act in the ten-session cycle of the complete Studies for Player Piano that followed. Lawson brought the well-rehearsed quips; Heisig struggled valiantly with the English language through the first day, wisely choosing to leave the talking to Lawson on day two. They tended to the Marshall and Wendell Ampico Reproducing Piano that was situated in the Purcell Room, Lawson feeding the audience information about its working and Heisig good humouredly failing to operate it. The instrument was a real find: an eighty-year-old mechanical marvel located last year and matching Nancarrow’s own down to the last detail (bar the Hoover pipe connected to a vacuum cleaner in the green room, ready to save the day should the ancient motor fail). A team at Trinity Laban had even fitted the hammers with metal tacks, just like the composer’s. Two concert-grand pianos fitted with portable pianolas also allowed Lawson and Heisig to run through the Studies for two player-pianos.

The two-day cycle of Nancarrow’s fifty-odd Player Piano Studies ranged from the early boogie-woogie-inspired pieces – rendered even more Wild West by the instrument’s clanging metallic action – to selections of the phasing tempo canons. The most famous Study, No.21 (Canon X), appeared on day one: its two voices – one beginning slow, one very fast – accelerating and decelerating respectively, crossing in the middle. It’s a much simpler concept than many of the studies appear to be, but it is an effective demonstration of Nancarrow’s rhythmic fixations; of the conceptually clean but not always observable workings of his method.

In that regard, it is one of the more memorable. With so many studies on offer, it was inevitable that some should stand out, some try the patience and many fall quickly from the memory. Among the most exciting were those containing the dazzling and rapid runs, nicknamed the “Nancarrow flick”. One of the most striking was 49c, whose cascade of crossing glissandos typified the magnetism of these works at their most intense. Then there are the occasional references tucked away in the middle of certain pieces. Lawson pointed out the ‘Dies Irae’ theme stated in 49b; Shostakovich’s DSCH motif jumped out of 46; 37 reminded of Ligeti. Lawson assured us that Nancarrow knew exactly what he was doing, and if a reference hit us, it was meant to be there.

The ten sessions were grouped by theme (for example: synchronised pianos; acceleration) and the two days didn’t give much sense of the chronology or, consequently, the development of Nancarrow as a composer. Certain patterns did emerge, however, from the numbering. The jazz and blues inspired pieces belonged to the lower numbers; the more atonal and agitated, generally, to the middle numbers; an almost neo-classical clarity and gentleness to the last studies. Perhaps the most touching was the final one of all, as much due to circumstance. This is the only study without a number: Para Yoko (For Yoko) is Nancarrow’s affectionate tribute to his wife, rendered all the more moving due to her presence in the hall, its tripping effusions suddenly seemed like an incredibly tender statement of devotion and love. Who would have thought that possible from the binary action of a player-piano?

After the marathon approach to the Player Piano Studies, the London Sinfonietta’s well-balanced and varied Queen Elizabeth Hall programme on Saturday evening was something of a relief. It also proved to be a fascinating counterpoint to the afternoon’s sessions, with a number of arrangements of the studies casting a fresh light on their complexities and opening up the rhythmic lines.

Yvar Mikhashoff consulted Nancarrow on the process of rendering certain studies for ensembles of musicians and received some quite specific instructions. Mikhashoff’s results take the studies into Appalachian Spring territory, which quite closely matches the sound of Nancarrow’s Pieces – No.1 and No.2 – for Small Orchestra, separated by more than four decades. Mikhashoff’s version of Study 21 (Canon X) overcomes the problem of physical impossibility by building in a digital sample of the most extreme elements, though in doing so the original conceptual clarity of the Study is obscured. Maybe Study No.6, in ensemble garb, becomes a little homespun and twee; but, in all, these arrangements help demystify some of Nancarrow’s dizzying rhythmic complexities while suggesting a musical path that the composer might well have taken had things turned out differently.

Another path not pursued is expanded upon in John Ashton Thomas’s arrangements of the three Studies grouped as 49. Lawson had discussed the idea of a concerto for pianola and orchestra with Nancarrow, but came to nothing: Lawson didn’t have the funds to formally commission the piece and Nancarrow was, by the time the project was mooted, in the grip of a wave of new-found popularity. Composer Paul Usher has recently combined the 49 set with Nancarrow’s fragmentary orchestral sketches to produce a conjectural concerto; the London Sinfonietta though gave a different realisation – John Ashton Thomas’s arrangement of the three studies for pianola with orchestra, clothing the original in a kaleidoscope of orchestral colour.

Lawson took to the pianola for the original 49a and for Ashton Thomas’s arrangements. He also did the pedal work for James Tenney’s Spectral Canon for Conlon Nancarrow, a solo piece that is almost shockingly tonal and which hurtles towards a blazing pile-up of Nancarrowesque detail over one unchanging chord, like a radiant Messiaen climax extended for several minutes.

There was also space for Nancarrow’s admirers and colleagues, John Cage and György Ligeti. Cage’s sparse Five was shown to be diametrically opposed to Nancarrow’s super-excited studies; Ligeti’s Continuum for solo harpsichord hinted at the kind of sympathetic musical thinking that might have drawn the Hungarian composer to Nancarrow’s music after he had happened across an early LP in a record store.

The weekend finished with an hour-long recital by the Arditti Quartet, an ensemble who went some way to restoring Nancarrow’s faith in performers. He was amazed by their sight-reading through his challenging First String Quartet, composed two years before he bought his first player-piano. The work focuses on the rhythmic tropes familiar from the later pieces – canons and chunky bass lines – while reminding strongly of Bartók. It is surprising that it shares so much with Quartet No.3, composed for the Arditti Quartet in the 1980s (a second quartet was never finished): that, too, works with gruff canons and stomping repetitions. Its trilling and swooping conclusion is indicative of its good-natured character. The Arditti musicians brought terrific precision to the exacting ensemble work, though their individual playing seemed surprisingly ordinary.

Paul Usher’s arrangement of Player Piano Study No.33 finished the concert, though the music seemed a good deal less appealing in quartet clothing; the manic sparkling brilliance lost but no special insight gained. A total shift of gear had been the recital’s highlight: Ligeti’s Second String Quartet played with the assurance of musicians utterly inside its vaporous textures. It didn’t seem as apt a point of contact to Nancarrow’s world as Continuum had the previous evening, but the contrast was welcome after quite so much excitable player-piano.

Still, the Arditti concert seemed a slightly downbeat end to a weekend of undeniably vivacious music; a rather chillier tone from the quartet-of-choice of the European avant-garde. The two days as a whole had the feel of a never-to-be-repeated experience, presided over by a troupe of Nancarrow acolytes who were there when it happened, who know the man personally. Even if, deep into the afternoon sessions with the never-tiring Marshall and Wendell, it had felt like Nancarrow overkill, the sheer marvel and lunacy of Nancarrow’s hole-punching project kept the weekend afloat. There is no doubting that the man was an analogue original.