These LPs are certainly diverse. One features a then-dynamic young conductor (Lorin Maazel) who was about to transfer to Decca and make some of the most highly-prized (in terms of sound) LPs of the vinyl era, another a legendary chamber group which was at the height of its powers, and the third another legend (Carlo Maria Giulini) whose tempos seemed to get slower with each passing year. 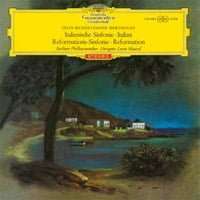 Maazel’s approach to Mendelssohn’s ‘Reformation’ Symphony is wonderfully Wagnerian. The extended introduction is imposing, the melodic line heavily underlined, the brass fanfares and wonderful string melody that announce the ‘Dresden Amen’ chorale (later used by Meyerbeer in Les Huguenots and Wagner in Parsifal) are beautifully intoned by the Berlin Philharmonic. The main Allegro is drivingly fast, the scherzo is powerful and rhythmically sprung, while the Andante flows effortlessly by on a bed of wonderful string tone. Maazel does the best he can with the uninspired last movement and builds to a huge peroration, where the sheer weight and power of the Berlin Philharmonic is a joy.

The deservedly much-better-known ‘Italian’ Symphony also receives a powerful performance, although the failure to observe the first-movement exposition repeat is regrettable, but the way Maazel often lends equal strength to up- and down-beats in the opening Allegro at a brisk tempo is very exciting, and the woodwinds have enormous character. For some the Andante might be a bit too speedy, the third movement is a little foursquare and the finale, while fast, lacks high spirits. But the Berlin Philharmonic plays magnificently and Maazel’s serious, unmannered approach throws fresh light on this masterwork. 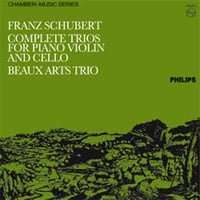 The Beaux Arts Trio was one of the twentieth-century’s greatest chamber ensembles, and recorded just about every piano trio known. In its 54-year history there were several changes of personnel, but the line-up on these 1966 discs is the original one, and like all great chamber groups there is an intense sense of conversation between the players in every bar. In the 1960s, exposition repeats – especially first movement ones – were not de rigueur and they are missing from both of the substantial works. Unlike many modern groups the Beaux Arts is not afraid to relax the tempo for the second subjects of both first and last movements and to lengthen phrases. Given that the cellist and violinist were schooled in a far more expressive age, they can play with an unbroken legato line and thus avoid the wearying staccato effect so beloved of contemporary string players, and Menahem Pressler’s rubato is entirely natural, his tone rounded and unforced. The Notturno’s glorious melody is beautifully voiced, the first movement of the B flat Trio has tremendous drive and its slow movement sings. In the E flat example, the Andante con molto is a truly spectral march at a flowing tempo, the finale has power and rhythmic buoyancy and the recall of the Andante is suitably chilling. No-one would want to be without the Suk Trio in D897 and D898, or Rudolph Serkin and the Busch brothers in D929, but almost half-a-century on, the Beaux Arts remains a central recommendation for both works. 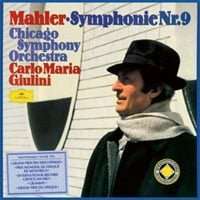 Giulini’s Mahler 9 is very sober. The first movement is 32 minutes long – there is virtually no expressive underlining and Giulini seems content to let the music speak for itself. Which is all highly laudable, but in the process something has been lost. In the opening movement the aching, nostalgic, world-weariness that Barbirolli and the Berlin Philharmonic found in what might be called the main theme is absent, in the central section (there is no conventional development) there are occasions when the performance seems to just plod along, the soft horn statement of two of the movement’s thematic motifs that begins the coda lacks magic, and the incredible softness and sense of dying away to nothing that Barbirolli so memorably evokes in the final bars is only hinted at.

The scherzo has three main dance themes, and here Giulini is very slow, which doesn’t leave him much leeway for observing the clearly marked tempo changes, but unlike the first movement he just about gets away with it, such is his power of concentration and the playing of the Chicago woodwinds is brilliant. In the ‘Rondo-Burlesque’ he takes virtually the same tempo as Barbirolli, but it is the Englishman who points the rhythms and conveys the movement’s rustic irony; in the second section Giulini does not convey any sense of quiet melancholy, and the intensely beautiful foretaste of the last movement is emotionally detached. Much the same can be said of the great Adagio itself. The tempo is spacious, there is a sense of nobility and stoic resignation (the Chicago strings are glorious) to the main theme, the first violins solo is laden with vibrato. But, as the movement progresses, Giulini seems intent on building a magnificent cathedral of sound rather than eliciting the meaning behind the notes, and not for the first time the music-making becomes narcissistic, as though Giulini is admiring his own creation. Barbirolli is faster, yet he brings terrifying emotional intensity to every bar, and one does not breathe during the final ppp-falling-to-pppp page. Nevertheless, Giulini does have a certain rugged grandeur and it is not a reading I would want to be without.

In terms of the sound, all three issues are different to the original pressings. On the Maazel the brass moves forward in climaxes to thrilling, but totally unrealistic, effect. With the Speakers Corner re-pressing the recording level is lower and the brass more recessed. The original has slightly greater treble extension and more defined timpani, but the image is more stable on the re-mastering. Much the same can be said of the Giulini. Here the Speakers Corner LPs have greater weight, the mid-range is marginally more congested than on the originals, but the wonderful tone of the Chicago strings is better captured on the remastering. The Beaux Arts discs have far more presence than the originals, part of which is down to the overall balance being more forward, unlike some Speakers Corner Philips pressings the treble has not been overly filtered, and here the SC discs are superior.

With regard to availability and price, a red label (the word Stereo is in a red box under the yellow DGG plaque) German pressing of SLPM 138684 will fetch – on a good day – about £35, but slightly later tulips pressings (which sound just as good) turn-up for less than £10, always assuming you can find them in good condition. The Mahler box turns up on a fairly regular basis and rarely costs more than £10,; however Phonogram (who owned both Deutsche Grammophon and Philips) introduced inferior lightweight (i.e. 90 or 100 as opposed to 120gm) vinyl long before most other companies, and the heavier pressings are not easy to find. First plum label discs of the Schubert are very rare, but because chamber groups are not collectible, they do not fetch high prices, however the red label re-issues on the Chamber-Music Series are still pretty good if again hard to find.