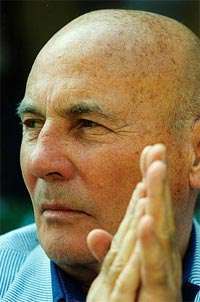 The latest composer featured in the BBC Symphony Orchestra’s “Total Immersion” series was the prolific Hans Werner Henze (born 1926), a typical day of films (two on this occasion, Barrie Gavin’s Hans Werner Henze: Memoirs of an Outsider and a filmed concert performance of Henze’s – purely instrumental – Requiem), talks and concerts.

In his introduction (given in the Mozart Room) before the final concert, Paul Griffiths outlined the rivalry of styles that were prevalent in musical composition in the years following World War Two (Berio, Boulez, Ligeti, Stockhausen, et al) and that Henze, through his music during that period, was regarded as “traditional, bourgeois and old-fashioned” until he became “more avant-garde than the avant-garde”. However, having described Henze’s Fourth Symphony (of the ten to date) as a “tough nut”, Griffiths’s musical examples proved to be anything but, and Oliver Knussen’s conducting of it in the concert itself made a compelling case for the work to be far better known and also regarded with the esteem it so obviously demands. Composed in 1955, Symphony No.4’s musical basis comes from the middle act of Henze’s opera König Hirsch (King Stag), the symphony being a single movement lasting here 23 minutes that certainly makes its declarations from deep in the forest while being tautly organised, both a symphonic journey and a vivid narrative, the eloquent melodies and the interweaving of instrumental solos being especially spellbinding – moonlight in sound – and with a cathartic, properly-symphonic climax.

The first concert of the day was devoted to Voices (1973), Henze’s ambitious, 100-minute setting of twenty-two poems, the authors including Ho Chi Minh, Bertolt Brecht, Heinrich Heine, Walton Smith, Dudley Randall, Heberto Padilla and Hans Magnus Enzensberger, the dedicatees including Peter Maxwell Davies, Harrison Birtwistle, Edward Bond, Michael Vyner and Paul Dessau. One can only admire Henze’s eclectic response and his wide-ranging imagination, the diverse instrumental ensemble embracing accordion, guitars (acoustic and electric), balloons (requiring bursting!), megaphone, a flautist asked to stand … the singer in ‘The Electric Cop’ (text by Victor Hernandez Cruz) also dancing while shaking maracas (the same setting requiring the percussionist to hit metal sheets with his hands adorned by boxing-gloves). Some settings are ‘popular’ (reminding of Kurt Weill, the accordion affording the flavour of the Tango), others Expressionist (Schoenberg). Some engage, some do not – invariably that can only be a subjective response. The lament that is ‘Caino’ (Gino de Sanctis) with its recorder, accordion and acoustic guitar leaves an impression with its repeated line of “Perchè soldato Tedesco?” (Why, German soldier?). One was amused – if not necessarily sustained – by the cabaret aspects of some settings, and if the music-theatre element perhaps palled, then such movements as the serenade-like ‘Il Pasi’ (Mario Tobino) stay in the mind, as do the subtle shifting colours addressing Heine’s ‘Heimkehr’ (Homecoming), the Shostakovichian irony of Erich Fried’s ‘Recht und billig’ (A Fair Deal), the poignancy of ‘The Worker’ (Richard W. Thomas) and the peaceful and contemplative ‘Das Blumenfest’ (Carnival of Flowers) with which Voices concludes.

This performance was superb, from singers (14 rather than the two Henze anticipated, but it gave the current crop of young vocalists a turn and all seem destined for good careers) and players alike, a great tribute to the students of the Guildhall School of Music, as well as Ryan Wigglesworth’s devoted and lucid conducting. The applause that a very small minority of the audience intruded with after most of the songs was a regrettable punctuation (hopefully to be edited out for the BBC Radio 3 broadcast, the date of which was to be confirmed at the time of the concert), but there was no doubting, however one may rate Voices as an entity, that this was a remarkable realisation of it.

The second concert (which included Colin Matthews, Antonio Pappano, Mark-Anthony Turnage, Ian Bostridge and José Serebrier among the audience) was a three-part affair, the first being of four of Henze’s piano pieces, each something of a revelation. However little music for solo piano he has written, the four that Huw Watkins played – with perception, sensitivity and panache – all made an impression, be it the explosive Toccata mistica (1994), the teasing, witty and economic Variations (1948), the dulcet, delicate and humorous Cherubino (1980-81) – an affectionate portrait of the character from Mozart’s Figaro – and the capricious Scorribanda pianistica (2003).

Flanking the Fourth Symphony was Fraternité (1999) – exquisite in its opening and then with an accrual of tension to an ambiguous coda – and one of Henze’s most-recent pieces, Elogium musicum (2008, its full title translating as Musical Eulogy for a Most Beloved Friend Now Departed), a concentrated 18-minute piece for chorus and orchestra that sets a specially written Latin text by Franco Serpa. Composed in memory of Fausto Moroni, Henze’s partner for many years, Elogium musicum in its reflective moments seems to be a first cousin to Stravinsky’s Symphony of Psalms; certainly there is a Slavic intensity present, as well as rage and a sense of ritual; there is also sparseness and stark acceptance, and a significantly-less quotient of colour for this composer, the use of a saxophone for plangent expression particularly haunting. As in the Fourth Symphony, the BBC Symphony Orchestra and Oliver Knussen were unrivalled interpreters and the members of the BBC Symphony Chorus were equally conversant with their share of the music.

Hans Werner Henze was present, cueing a standing ovation at the close to round-off quite a day.

Wolfgang Rihm is the next “Total Immersion” composer, March 12 and 13.