The outstanding young soprano talks about her career… 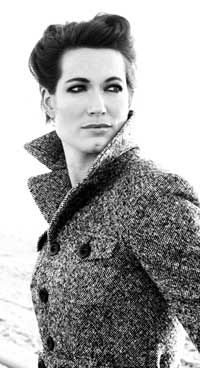 Next May (2008) as part of the Barbican Centre’s Great Performers series there will be a concert performance of Mozart’s Idomeneo. The artists involved comprise a fine line-up by any standards for they include Ian Bostridge, Emma Bell, Christine Rice and Ben Hulett. Nevertheless, the publicity for the event chooses to put the main focus not on them but on Kate Royal who will be singing Ilia; it’s her picture that is in the Barbican’s brochure accompanied by a quote from The Guardian: “Kate Royal is well on her way to establishing herself as one of the finest sopranos to have emerged in Britain for some years.”


This emphasis amply confirms Kate Royal’s success, a success unusual for a singer who is still in her twenties, but perhaps not quite so surprising when one remembers that she won both the Kathleen Ferrier Award and the John Christie Award in 2004. Kate herself doesn’t, however, play up that notable double when I talk to her: “When you’re studying at college there’s a focus on competitions but they aren’t everything. A lot of people who don’t win them, those who come in second or whatever, often end up being extremely successful, and sometimes more so than those who do win. In my case it was just an example of everything coming together at the right time.”


That things should have worked out this way is the more remarkable when you consider Kate’s background. “I don’t think I went to the opera until I was sixteen,” she tells me, and any earlier ideas about a future career had gone in a somewhat different direction. “I thought I might do something connected with theatre or dance. I had studied dancing since the age of two or three because my mother was a dancer and a teacher. As for music, the piano was my main musical focus during my schooldays in Dorset. I was also part of a local theatre company. We did a lot of musicals and revues featuring the likes of the Gershwin Songbook, but classical music didn’t really come into it at all. I was doing gigs after school with these other singers in hotels, golf clubs and God knows where else, but however much I enjoyed it my voice wasn’t really suited to musical theatre or to the jazz mould and that frustrated me.”


Any dissatisfaction that built up, however, was to provide fertile ground when a teacher pointed the teenage Kate in the direction of opera. That led her to the Guildhall School of Music and Drama and to the National Opera Studio, but even then there was no certain commitment on her part. “I didn’t really know what would be involved in being an opera singer. Indeed I had no idea at all. It wasn’t until I had completed all my courses and was actually out there dragging my suitcase along the street and working wherever I could that the full realisation suddenly came over me. Only then did I find myself thinking ‘This is what I am now, this is what I do’. I think that I am an ambitious person but I’d never fixed my sights on this career and then set out to achieve it as a clear goal.”


Another special aspect of Kate’s career stems from the fact that when she turned to opera it became only part of her love for classical music. This is confirmed by the fact that she has already appeared in the concert hall and in recitals. “During my time at the Guildhall I started to become interested in songs, in Lieder. Again it was something that I didn’t know existed and I had never studied the great poets. As for recitals, the very first full-length one I went to was my own. It was so new to me that it was like stepping into somebody else’s world. That’s how it was for a long time and part of me felt that I didn’t belong there because I knew so little about it. It was difficult to take on board the fact that you had to sing twenty-five or even thirty songs and to entertain an audience for an entire evening with none of the lighting and costumes you get in the opera house. I remember that first occasion and how at a certain point I found myself thinking ‘Are we still here? I can’t believe it’s still going on’. But now, well I can’t think of anything more enjoyable.”


Having established herself so strongly in opera, not least in those by Mozart, it’s striking that Kate has also embraced the sphere of Lieder to this degree. “I never want to lose that as part of my career: it’s my treat, something I feel particularly lucky to be a part of. It’s quite amazing especially when doing it at the Wigmore Hall where the audience is so knowledgeable. Many of them know the songs far better than I do being someone who has only studied them for the last five years or so. It’s a wonderful feeling to stand in front of a group of people that you don’t know but whom you can see – because in a recital the lights are usually up to enable the audience to follow the translation. That means that you are able to share with them the words you are expressing and you actually see their reaction – I don’t mean merely what comes with the applause if they are pleased but the fact that you can emphasise a particular word or phrase and actually see from their expressions what that means to them. That’s what I find especially enjoyable about recitals, and it stems from what I learnt from Selena Cadell at the National Opera Studio. She very much encouraged the idea of not just communicating with your audience but actually looking at them and telling them something. That’s such a shared exchange. In the opera house it’s different because you’re so far away, but at a recital you actually get to know certain people in terms of what buttons to press for them and what kind of words they enjoy. That’s just really fun.”

Given that enthusiasm, it seems certain that Kate is especially pleased with her current schedule. On 20 August, with pianist Roger Vignoles, she shares a programme at the Edinburgh International Festival with Christine Rice. Coincidentally both artists have appeared at Covent Garden in the role of Miranda in Thomas Adès’s opera The Tempest. Their shared recital features music by Schumann, Mendelssohn, Brahms, Gounod and Chausson. Come October (the 29th) Kate, again with Roger Vignoles, will have a solo recital at that favourite venue the Wigmore Hall when Schumann will be paired with Hugo Wolf. That would be exciting enough, but between times Kate makes a Proms appearance. This is on 23 August when, in a programme by the Orchestra of the Age of Enlightenment and the Freiburg Baroque Orchestra, she and Ian Bostridge contribute four pieces by Handel.


On the opera side of things too, Kate’s experience is building up. Looking back she observes that “Glyndebourne has been fantastic for me because it’s been a real training ground to get me used to singing in a big space”. It was indeed just that given her Covent Garden début last March. But if the degree of fame she has already achieved confirms both her promise and her stature even now it can be said to have a downside too. “I feel a huge amount of pressure. I’m not going to pretend that it doesn’t affect me because it does. I have had to learn to deal with what has happened to me, and all the more so because I never imagined myself in this situation. I find that some people say to me ‘Why don’t you do more bel canto?’ or ‘Why don’t you do Puccini?’ and offers certainly come in thick and fast for all sorts of roles. But I’m not scared of saying ‘No’. I’m very, very aware that things can go wrong quickly. You can easily fall flat on your face. Another difficulty is narrowing down what you do to find roles sympathetic to your voice. It’s my instinct that tells me what is going to work at this stage and you have to trust yourself in that way. At the same time I wouldn’t want to be singing just one new role a year because that together with a couple of recitals would never fulfil me. In fact I love being busy and I love a challenge. I think that’s when I sing best because it fires me up and I feel that I’ve really got something to work for. But I try to be careful, to look after myself. The thing about singing is that you can only work so hard and then your voice stops responding properly. It’s different being a pianist or a cellist who can practice twenty-four hours a day. As a singer, you have to know your voice well and to keep listening to what it is telling you.


“There’s another thing too: the travelling. You spend an awful lot of time away from home and on your own. I’m very much a home girl and we’re a close family. Sometimes that makes me ask myself if this is really the right career for me, but then I consider the most important fact of all: that I am so lucky to be able to make a living from doing something that I love. How many people can say that?”