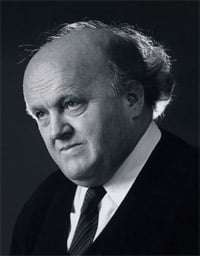 Horst Stein was one of the last conductors of the generation who learned their craft in the opera houses of post-War Germany, working his way upwards without flamboyance or the glare of publicity. For a musician who so rarely made the headlines he leaves a surprisingly large recorded legacy. Perhaps its most important feature is the complete orchestral music of Max Reger on Koch Schwann – seven purely orchestral and two also with chorus – unavailable, sadly. Other Stein recordings have fared better, including cycles of the complete Brahms and Schubert symphonies (both live) and the Beethoven piano concertos with Friedrich Gulda and the VPO. With Stein being so much at home in the opera house, at least in the first half of his career, it is not surprising that his discography features so much opera: he recorded Tristan no fewer four times, and a DVD of his Parsifal, recorded at Bayreuth in 1981, was released recently.

Stein was born on May 2nd, 1928 in Elberfeld (the home town, incidentally, also of Hans Knappertsbusch and Günter Wand), the son of a mechanic. Having taken oboe, piano and singing lessons at school, he then studied at the Hochschule für Musik in Cologne, taking composition classes with Philipp Jarnach and conducting with his fellow Elberfelder Günter Wand. He was appointed to his first post, as répétiteur at the municipal theatre in Wuppertal, in 1947. In 1951 a move to Hamburg brought him into contact with Joseph Keilberth, who was to prove a major influence on Stein’s conducting. As Keilberth’s assistant he went to Bayreuth, where he rubbed shoulders also with Clemens Krauss and Karajan. His rising star prompted Erich Kleiber, in 1955, to bring him to the Staatsoper (Unter den Linden) in East Berlin, reopening after the war. When Kleiber suddenly left, Stein – still only in his late twenties – found himself assuming the chief conductorship; he remained until 1961.

The erection of the Berlin Wall pushed him back into West Germany, and a steady series of appointments saw him consolidate his reputation: first back in Hamburg, he went on to Mannheim as Generalmusikdirektor and head of opera from 1963 to 1970, when he was named Principal Conductor at the Vienna Staatsoper, where he was to make over 500 appearances. He went back to Hamburg yet again in 1972, as Generalmusikdirektor of the Staatsoper and also conducted the Hamburg Philharmonic from 1973 to 1976; simultaneously, he held a professorship in conducting at the Hochschule für Musik.

His other orchestral posts included chief conductorships with the Orchestre de la Suisse Romande (1980-85), the Bamberg Symphony Orchestra (1985-97) and Basel Symphony Orchestra (1987-94). He appeared regularly with the NHK Orchestra in Japan, and conducted no fewer than 138 times at Bayreuth between 1969 and 1986, including the centenary production of Die Meistersinger von Nürnberg in 1983. Among his UK appearances were Lohengrin with the Hamburg Opera at Sadler’s Wells in 1960 and a concert of Wagner excerpts with the Berlin Radio Symphony Orchestra at the Royal Festival Hall in 1987.

Stein died at home, at Vandoeuvres, in the canton of Geneva, on July 27th, a little over two months after his eightieth birthday.