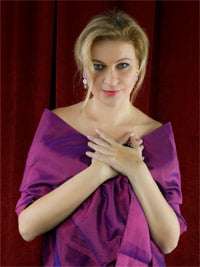 This season The Royal Opera is reviving all three Mozart-Da Ponte operas: Don Giovanni is double-cast, its last six presentations feature Ruxandra Donose as Donna Elvira, the woman who is desperately in love with the philandering Don. Ruxandra has a very wide repertoire: practically all the major mezzo roles – not bad for a singer who started her musical career in Romania as a concert pianist.

Ruxandra was born and raised in Bucharest amongst a family of musicians – her father is a published musicologist and her mother a teacher – and had early exposure to the musical world: “I was immersed in music generally, though not singing. The first opera I heard – quite late – was Die Walküre when I was twelve. My father got me an LP of La traviata with the fantastic Romanian singer Ileana Cotrubaş as Violetta conducted by Carlos Kleiber; this is one of the most amazing recordings of the opera. I don’t think I am exaggerating that this LP showed me what singing can do, and Cotrubaş’s singing showed me how the voice with the music reinforce each other: it was phenomenal. I listened to the recording many times. This and my weekly trips to the opera from then on helped me.” 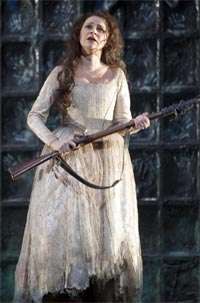 But it was the piano that dominated Ruxandra’s formative years, until she had to sing. “I was a pianist, a serious one. I studied piano from aged six. I finished high-school as a pianist, and won competitions nationally and internationally singing – oh, I mean playing! Singing and playing are the same word in Romanian. Pianists are supposed to take singing lessons to learn how to accompany singers, and when my teacher heard me sing she was very enthusiastic. I opened my mouth and she said: ‘wow, a real mezzo’. At the beginning it was also much easier than playing the piano. As a pianist I was practising six or seven hours a day: Prokofiev sonatas and Liszt etudes! Then, all of a sudden to be singing an aria was much easier. I was fascinated by the direct approach: to just open the mouth and sing. What I noticed playing the piano was that I was extremely concentrated and nervous, yet when I sang I was not; it was very natural for me. I took a year-and-a-half studying both because I could not decide. It was a risky decision to opt for singing because I knew where I was with piano, but singing was new territory. It was, of course, the right decision.”

Ruxandra is a natural and enthusiastic performer – and opera is now taking on a bigger part in her life. She adopts a pragmatic approach to the hectic performance schedule that the world’s in-demand singers find themselves. Juggling family life, all the travelling, whilst maintaining artistic standards of the highest calibre is a constant battle: “I find it hard, one of the greatest trials of this profession, because, although from the outside it looks glamorous, you’re always presenting yourself to a new job. You have to be fit for this new job every time. It does require a lot of inner stability to cope with the outer instability. Some singers find it easier if they don’t have a family, which I completely understand. I have chosen to have a family, and can see very well how this can be consuming and hard, but at the same time the family gives me a lot of support for who I am as a singer and a person away from the stage. It’s all very well identifying with a role, but when I leave the stage I need that separation from work. In the beginning the separation was difficult, but now I have learnt to do this, though it is a constant work-in-process.”

Not only is there family and performance, but Ruxandra continues to push herself, and has just completed a doctorate in the Art of Interpretation and the Concept of Style: “It is a very large subject about the idea of style. One of my example subjects was Carmen. In my research I feel I have got an academic background to the character – clearly on the stage it comes down to being just credible. I finished it a year ago, and it took me about six years. I don’t know how I found the time! I did it because my teacher in Romania pushed me to do it. He said that if I ever wanted to teach I needed something like this. I don’t teach now because I don’t have the time, but I do have young singers ask for my opinion, which I like very much. There are many talented Romanian singers, and if at any point I can share my experiences I really want to do that.” 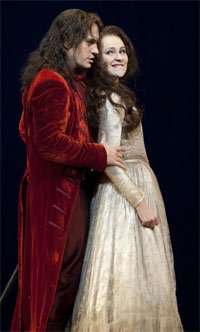 For The Royal Opera she is assuming the role of the lovesick Donna Elvira, a character that some find unbelievably naïve in her pursuit of Don Giovanni. This can make the audience incredulous to the part, so taking it seriously, and understanding the character’s motivations are at the heart of Ruxandra’s interpretation: “When I first learnt about her I was a little confused: why would I like a woman who is being treated so badly and just does not get it. But, what I realised was that the key to making her work was that she must be sincere, devoted and loving. She loves Don Giovanni, and when you love someone like this you don’t expect anything in return: you love him because you love him. I think that, as opposed to the other women and victims of his charms, she really loves him and somehow she gets him. It’s a big ‘travel’ for Elvira: when she is looking for him at the beginning of the opera she is just trying to find him, but then Leperello tells her that she’s not the first, and she won’t be the last, which is a big shock for her. Of course she feels betrayed and she swears revenge, but she still loves him. After each blow that she receives she wants to understand him more. It culminates at the end, where she realises that in spite of everything she still loves him, and she finishes her aria almost happy: she is tormented yet is resolved to give him another chance.”

Giovanni in this run of performances is assumed by Uruguayan bass-baritone Erwin Schrott: “I was talking to Erwin and he also thinks and agrees that there is a special bond between the two characters, and he is moved by Elvira’s efforts, but because he is a self-destructive character on a dangerous trip, in the end the way he treats her is because he wants to get himself out of her mind; perhaps he does care for this woman. In a mean and cruel way he is doing her a favour!” Whether we admire Giovanni as a defiant hero – those insistent ‘No’ responses to The Commendatore’s pleas for his repentance make him a Romantic hero for some – is open to interpretation: “I wonder how much is heroic or how much is an understanding that there is nowhere to go. He has gone beyond everything and is on a self-destructive path because there is nothing more that this life can offer him, so he wants to experience what The Commendatore has to offer. He almost relishes this idea of being saved, because for him Hell is here on Earth; well, that’s what he thinks.”

Of the opera itself: “I have not always liked the opera per se – I’ve always liked the music, and I have discovered this work as a piece to get a lot from. Now I consider the Da Ponte operas supreme, and I have been fortunate to have sung in all three. I like that Elvira is a deep and complex role: she is a thinker. But, in order for me to like an opera in which women are treated so badly I have to see the bigger picture to understand psychologically what’s happening between the characters. It’s a symbol, and it’s a good lesson that [decadence] cannot end well.”

Some do not warm to a preachy, moralising story, such as found in the Mozart-Da Ponte operas, and particularly Cosi fan tutte and Don Giovanni. Ruxandra thinks carefully about what the final scenes, where the characters address the audience directly on the events that have transpired, mean: “Did he mean it? Everything is well: well, it doesn’t end well! Or, is this dust thrown into the eyes, meant to blind the audience and dazzle them, so as to think that matters are fine. Or is this finale just to get approval for the work from the musical authorities at the time? These unheard, horrible, shocking and unacceptable things that you’ve just seen are not real, almost like a fairy tale, and now [the audience] can be happy that you have learnt a good lesson.”

Of Elvira, whose appearances in the opera can attract some mirth, because of her devotion to Giovanni, Ruxandra is adamant of the seriousness that must be employed: “Sometimes people laugh because she comes again and again, but that’s not funny, it is horrible. It is tragic. The bottom line with Elvira is that she must not be a cliché, so one must find real feelings that this woman must have: she can be hurt, proud, furious, seduced, soft, a fool. All of these things, if they are completely sincere, are not funny. She is a very human character – a hallmark of Da Ponte – and it is important to realise how deep these feelings go. She is either completely in love, or completely unhappy, or completely desperate: everything is a big emotion for her, and she follows them all through. I have developed a complete passion for this part!”