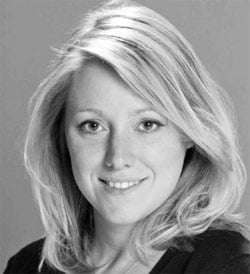 It’s that time of year, where choral societies around the UK dust down their copies of Handel’s Messiah. At English National Opera Messiah is also being performed, but with a different approach, bringing the story and its contents to life as a staged performance.

When I arrive at the Coliseum to talk to soprano Sophie Bevan, she has just completed a dress rehearsal – but is still wearing her own clothes. This is a result of consultation with director Deborah Warner, who has allowed the singers considerable flexibility in their choice of what to wear. Sophie is still clearly invigorated by the rehearsal, talking enthusiastically. “First of all they asked us if we could come in wearing the sort of things that we wear day to day, but I don’t really have a style in particular – so that was kind of difficult! I think the idea was so that we all looked ‘normal’ on stage, so that we didn’t look out of place. That means that people will look at me and think ‘she looks like a young girl’, someone who looks her own age, because I’m definitely the youngest of the principals. I think it’s nice that Deborah wanted to keep me my own age, rather than making me something that I’m not. So often in operas you’re asked to be something completely different, and more often than not I’ve got a massive wig on, or a huge dress. It’s so nice just to be myself for once!”

This is in contrast to previous Handelian roles Sophie has played. “In Rodelinda I played a massive queen, with a big crown and a gold dress, and in Riccardo Primo it was the same sort of thing – but then Messiah isn’t really an opera, so you can do what you like with it, which is exactly what Deborah has done.”

Warner has in fact brought Messiah fully up to date, as Sophie explains. “I think the idea is that it’s relevant today, and as Deborah said in an interview, this production is meant to be for atheists, so that you can look at it and take of it what you will. That means an atheist can look at it and say ‘this is a story of a man who was hurt and badly treated’, and it’s a horrible, terrible story, and it can touch you in the same way as a Christian, for it’s the story of someone who died for us and died for our sins.” 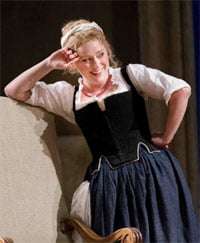 In a sense, I suggest somewhat crassly, it’s like going to a football match as a neutral. Sophie laughs. “It’s really funny you say that, as we were sitting there listening to the choruses this morning and I was saying to one of the girls how they sounded like football chants, when they were hurling out lines like ‘the Lord gave the word’ and ‘Hallelujah!’. In Act Two – or Part Two, I should say – we’ve got this Christ-like figure, who’s a dancer, and Catherine Wyn Rogers, who is playing a Mary Magdalen figure, is singing, and the chorus are standing either side. They direct their choruses straight at Jesus, or out to the people, and they are singing ‘are we like sheep who have gone astray’, being angry at themselves, and then suddenly turning to John Mark [Ainsley], and questioning that if he’s God then he can suddenly prove himself. It’s extremely powerful.”

My own experience of performing Messiah is that during rehearsal, the melodies become firmly lodged in your head, and Bevan has experienced the same – though relishes the effect. “When you’ve been doing it for weeks on weeks you really get into it, so it’s hard to approach it from the point of view of somebody who’s not seen it before, so I really hope people get into it, and see that Messiah can be something other than a thing you get up and sing every Christmas. I’ve done Messiah lots and lots of times, and this is the first time I’ve really looked into what the words are. ‘Are we like sheep’, for instance – people will get up and sing with a smile on their face, but when you think about what you’re singing it’s about following what everybody else does, so if that means bullying someone that’s what happens, and it’s very depressing in a sense.” She also recognises the importance of not taking Messiah to be a universally positive piece. “It’s not all the way through, as Part Two is about the Passion of Christ which is just awful, with the torture and crucifixion.”

This would appear to be the first time for Messiah in the Coliseum. “It’s the first time it’s been staged, definitely. The chorus I think are finding it a challenge to sing, as big opera choruses are different from something like this, where the music is really polyphonic with lots of semiquavers and things. They’ve had to learn it all off by heart, which is a massive job, but they’re doing brilliantly. The tradition with oratorios is that you stand there with the music, so it’s quite different from normal.” 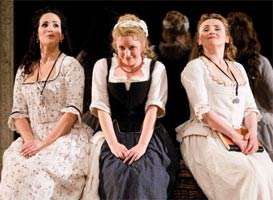 With several Handel roles already under her belt, does she class Handel as a favourite composer? “I do love Handel, but I’m definitely of an age where Handel and Mozart is what I’m singing – I won’t be going on to Verdi and Puccini for a good while yet. It keeps the voice fresh, because you don’t have to go for massive notes or fight a big orchestra.” Does that mean she takes guidance when roles are offered to her? She smiles. “I do, yes – my teacher is able to give a very good opinion on that. It is very difficult, because you want to say yes to everything, but it’s so bad for your voice to sing too much so young, because you’re literally putting so much pressure on your vocal cords. Even though you could do it, you’d be putting your cords under so much strain. I want to keep my voice working as long as possible, and I don’t want to ruin it too young. It’s so important. A lot of times you don’t realise the strain you’re putting your voice under, and if you’re singing over a massive orchestra you have to take a big rest afterwards.”

Sophie studied at Royal College of Music for five years, straight from school. “At that time I was singing mostly oratorio but I always loved acting and dressing-up, the make-up, and being somebody else. I do love the oratorios though, and I really could sing Bach for the rest of my life”. She talks enthusiastically about Baroque writing for the soprano voice. “It’s instrumental really; you find that you’re suddenly an oboe or a violin. It’s totally different from singing Mozart, and it’s challenging in a way that I like to be challenged. I definitely want to carry on doing that.”

Laurence Cummings is conducting ENO’s production of Messiah, “Laurence is absolutely fantastic, he’s such an authority on Handel, and he brings it alive – it’s so dance-like. He manages to make every chorus and solo number work together so there are no breaks, as they’re all related musically. They’re all bright and nothing laboured. When you’re performing Messiah as a concert piece so often you’ll have a break where the soloist gets up, walks across, sings a recitative, then walks back, and it can take so long. We’re doing everything – just one chorus is cut in this version. I think people will be surprised how quickly this goes.”

Time will tell, but, as Sophie says, “people forget what a massive story this is.” It sounds like Deborah Warner is about to remind them.