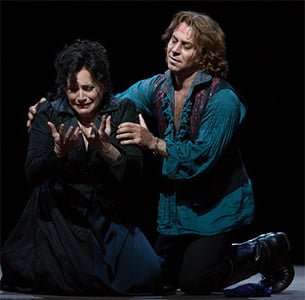 Giacomo Puccini (1858-1924), the Italian master of operatic tragedies in the grand manner, composed Tosca as an unabashed melodrama of sadism, lust, revenge and murder. It was first staged in Rome in January 1900. The American musicologist Joseph Kerman notoriously dubbed it “a shabby little shocker”, while Benjamin Britten declared himself “sickened by the cheapness and emptiness” of Puccini’s music. So expect to have a good time.

Set in Rome, a century earlier, the opening brass chords are a shock to the system: they are the motif of Scarpia, chief of police, and they drip with malevolence. Before we meet him, though, there’s a whistle-stop half-hour of exposition to get through.

Escaped prisoner Angelotti seeks refuge in the church where his friend Cavaradossi is painting an image of the Madonna. The artist helps him to hide and then endures some jealous banter from his lover, the singer Floria Tosca, over the likeness in the painting.

Although Scarpia fails to finds Angelotti when he arrives, he soon arrests Cavaradossi for conspiracy and decides to use emotional blackmail on Tosca in order to discover the outlaw’s whereabouts – and to have his wicked way with a beautiful woman into the bargain. Scarpia, though, has seriously underestimated Tosca’s spirit…

Don’t expect to see many of the principal characters survive the opera intact. Minor figures like the Sacristan and the Shepherd Boy are your best bet for a happy ending; for the rest you can look forward to a stabbing, a firing-squad shooting and a spectacular suicide. 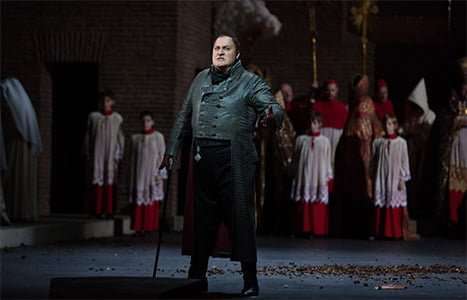 …rich, baleful orchestral writing and more overwrought arias than in any other opera. Cavaradossi frames the tale with two classic tenor arias, ‘Recondite armonia’ and ‘E lucevan le stelle’; in between, Scarpia and the church choir sing an extraordinary Te deum, Tosca voices her complaint to an unjust God in ‘Vissi d’arte’, and the Shepherd Boy opens Act Three with ‘Io de’ Sospiri’ – the most effective evocation of dawn in any opera before Britten’s very own Peter Grimes.

Luc Bondy’s Met production was roundly booed when it opened in 2009, and Franco Zeffirelli – whose venerable staging he had usurped – scornfully described Bondy as a “third-rate” director. Naysayers seem to have had a problem with the pervasive luridness – the production is loaded with sexual explicitness – but Bondy is hardly one of the bad boys of European opera and the conservative Met audience was fondly attached to its long-lived predecessor, so maybe there was overreaction. With this live HD broadcast we can make up our own minds.

In New York City at the Met itself, Tosca plays in repertoire until 28 December, albeit with a substantial cast change after 16 November (although Gagnidze will remain for the entire run). The worldwide live broadcast is on Saturday 8 November, a matinee that reaches UK cinemas at about 6 p.m.