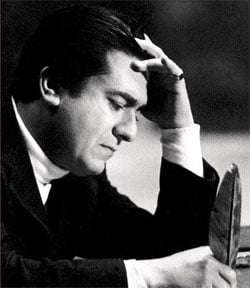 Was it Giuseppe Di Stefano’s spontaneity and involvement in what he was singing which attracted so many collectors to his recordings? If one listens to his early 78s, one hears a third quality: the sheer beauty of his lyric tenor. Ignore hindsight and later performances and simply bask in the warm, liquid tone. Those recordings have been reissued a number of times and should be on the shelf of all who love the singing voice.

Born near Catania on July 24th, 1921, Di Stefano discovered his vocal gifts when a teenager and won a couple of competitions before the war. He began studying with Adriano Tocchio, a tenor in the chorus of La Scala, and then, more rewardingly, with the baritone Luigi Montesanto. During the war, he served in the Italian army and sang in night-clubs. When the army capitulated, he fled to Switzerland, where he was interned in a refugee camp.

Contact with Radio Lausanne resulted in his making a number of broadcasts. It was then that he made his first records, later issued on an LP from Voce del Padrone. These operatic arias were followed in the same year, 1944, by ten songs made for Swiss HMV. (I have seen the label of one 78 bearing the name ‘Difano’.) He also recorded under the pseudonym Nino Florio. His official operatic début came in April 1946, when he sang Des Grieux in Manon at Reggio Emilia. That was also the role of his first appearance at La Scala, in March 1947. He sang in other leading Italian theatres, such as the Rome Opera and the San Carlo, Naples, before making his bow at the Metropolitan in February 1948, as the Duke of Mantua to the Gilda of Carmen Gracia and Rigoletto of Leonard Warren.

In the USA he sang often with the Chicago Lyric Opera, while farther south Mexico City, Rio de Janeiro and Buenos Aires heard him on a number of occasions. His British début did not come until 1957, when his Nemorino in L’Elisir d’amore was heard at the Edinburgh Festival. (Available on Andromeda, it was reviewed in my Opera Round-up in November 2007.) It was not until 1961 that he sang at Covent Garden: as Cavaradossi to Régine Crespin’s Tosca. During the 1950s, Di Stefano started to undertake heavier roles, and adverse criticism became more apparent. The tone became more open and was sometimes forced, disfiguring the bloom and sweetness of his early career. As he made many recordings throughout the decade, and live performances are becoming available on CD, one can hear the change in the voice. Such a voice as his should not have deteriorated so early.

He continued to record, mainly recitals, but the last complete opera in a studio recording was Tosca for RCA, with Leontyne Price and Giuseppe Taddei under Herbert von Karajan. The tenor was only 41. In 1966, in Pasadena, Di Stefano unwisely tackled Otello, but more success came from operetta performances, such as Sou-Chong in Das Land des Lächelns. At the end of 1972 he and Maria Callas, with whom he had sung often, recorded some duets for Philips: they remain unpublished. In October 1973 the two singers launched a world-wide tour of concerts: unsuccessfully being the general view.

Whatever happened to his voice (indeed, whatever he did to it), Giuseppe Di Stefano still has many admirers. He is reported to have said, ‘I sing by pure instinct and a little brain, but critics hate people with instinct.’