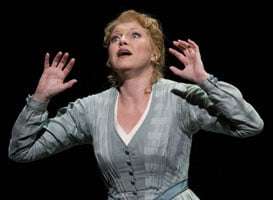 As a teenager Janice Watson was not very good at the piano but that proves to have been fortunate for us. Had she got on better at the keyboard it could easily have been her second instrument when she had to find something to study at college alongside her first passion, the flute. As it happened, a friend of hers was Stephen Langridge, then a horn player in her local youth orchestra, and he it was who encouraged her to consider singing. In fact he suggested that she should sing for his father, the tenor Philip Langridge. It was this that led to her visiting the married Langridge and Ann Murray and being told that they thought she had a voice but would need lessons.

“That was where it began, and when I eventually got a place in the Guildhall School of Music it was to study the flute and singing. When I got to eighteen, I chose singing and was immediately helped by having as my teacher the wonderful Johanna Peters. She was a great, great character and a very supportive lady. Later she helped me put together a programme that really suited my voice, one that ranged from ‘Depuis le jour’ from Charpentier’s Louise to Tippett’s A Child of Our Time. By entering competitions and in particular by winning the Ferrier (Award) I was able to get an agent and then people like Welsh National Opera became interested.”

If you put together Janice’s life and her career certain paradoxes emerge. She’s become an established international name – indeed I speak to her as she rehearses the title role in Kátya Kabanová at Covent Garden having not so long ago made her debut at La Scala in that same role albeit in a different production – but she was born and bred in Queensbury in Harrow, North London. “We had quite a difficult life,” she recalls, “and didn’t have a lot of money, but I had a great childhood with my parents and my brother.” She is clearly the person she always was – no airs, no graces – and someone who has thought about what she most values in life. “I do have a wonderful job and singing is a great career, but it can follow the pattern in which you’re in, you’re the favourite and then you’re gone. I enjoy it very much but I never forget that I have a life outside singing too, a child and a marriage, and in a way that life, my home life and my daughter, is much more important.”


That’s a broad view to take but it in no way limits Janice’s commitment to her art. That’s self-evident when she talks about her passion for dramatic roles. “I do love those characters with serious sadnesses and tragedies in their lives: I find it fascinating to try and portray them including those with mental problems. When you portray Salome, for instance, or Blanche in André Previn’s opera of A Streetcar Named Desire, it’s not just a case of doing a mad scene filled with emotional angst. It’s more than that because very often you can read in the tones of the music what their actual thoughts are, and it’s the same in ‘Kátya’. Just this morning we were rehearsing a scene in which the music suggests all the unfinished thoughts in her head and that’s what thrills me: to be able to find so much in what’s been written. Personally I find great joy when working in pieces that possess a really strong dramatic structure. Think of Benjamin Britten and Peter Grimes, for example. Much as I love that music you could in a sense take it away because the piece itself has so much dramatic power, and it’s the same with ‘Kátya’.”

Although Janice has performed Janáček in English, her preference as with all operas lies with the original language. “Every language has its own strength and beauty but particularly Czech. I’m really in love with it, as I am with German. My least favourite is probably Italian because in those operas you often have repeats and have to find contrasts in delivery to make an effect. On the other hand the reality of what you perform in Czech or English or German is usually quite specific. When you are singing an aria in Italian it’s as though you have the words and you also have tunes that fit with the words, but they’re not central to one another in the same way as when you’re singing the embroidery aria in Peter Grimes or the arias in ‘Kátya’.”

As we talk Janice comes across as being in the best possible sense ordinary, not you might think the kind of person who would be so strongly drawn to these dramatic roles. Nevertheless her devotion to them is not for a second in doubt. Some singers who share this preference like to balance things out by taking on much lighter roles from time to time but Janice has a different way of achieving a change of pace. “I love concert hall work as well. It offers the joy of not having to act, of just standing there and concentrating on your voice. Singing something like Verdi’s Requiem is technically difficult but being out in front doing that is much less pressured. The orchestra is behind you like a big cushion, and you just sing: that’s definitely where I find the contrast to doing heavy roles.”

From this it’s apparent that concert hall performances supply their own form of pleasure for Janice but she undoubtedly embraces the opportunities that opera provides to get to grips with the people portrayed in them. “I think that the reason I love singing and why I like to portray these roles is because they are so completely there to be realised. When you play somebody you become that person, and I don’t really understand those singers who can simply walk on taking the view that they’ll just let it all stand on their singing. For me getting into the character is so important and I find that I have to have proper reasons for everything I do when on stage. I remember being in a ‘Marriage of Figaro’ some years ago for which we hadn’t rehearsed at all. I had no idea where I was supposed to be on that stage because nobody had told me, and I just thought ‘this is not performing – it just cheats everyone including the audiences and it’s important that audiences should be happy’. Perhaps I’m banging on about this but I do think that it matters: audiences are our business.”

It’s also clear that Janice can be made positively unhappy when a director imposes ideas that don’t fit the opera in question, and one senses that on such occasions she is aware of being frustrated in her desire to create convincingly the character she has seen in the music. “To be in a situation in which you feel totally unfulfilled by a production leaves you feeling very disillusioned. The more so because in creating a role you are often using your own experiences. That’s something that definitely happens, although it’s not conscious: it’s instinctive and comes from inside – which is fortunate because you wouldn’t want to be distracted by your own ghosts and gremlins following you around. I’m very, very glad that this ‘Kátya’ is so good with Andrew Sinclair handling this revival of Trevor Nunn’s staging. It’s so natural and honest, stylised but quite truthful to Kátya’s state of mind.” Another attraction of this production is that it reunites Janice Watson with the conductor most associated with Janáček, Sir Charles Mackerras.


Before concluding our talk, we discuss the role of Kátya and how Janice sees it. I had already read of her belief that it is wrong to play her as mad and hysterical, an approach adopted by some because this story of an unhappily married woman’s affair with another man ends in her suicide. “If you look at Kátya from beginning to end, her whole story is like a curve with no breaks in it. If you start to try and make her mad, you undermine her dignity. You can argue about the extent to which her lover, Boris, is truly in love with her, but in the end I don’t think that that is what is important to the story. I think that for Janáček his most important concern in this opera was to portray love, and that’s what he does by giving Kátya a love for Boris which is absolutely real and something that she has felt for nobody else. She has achieved in that what she needed to achieve and consequently when he leaves she is willing to sit down and then to die. She’s content because she’s had love once in her life. There’s a completion in that which can’t be altered by what Boris chooses to do. It’s very tragic, but it’s extremely real and it happens all the time.”