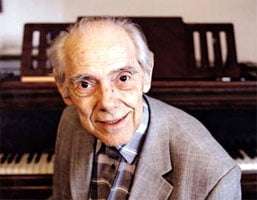 Despite the best efforts of the regime that persecuted, frustrated and intimidated him for some forty years, Petr Eben enjoyed an international reputation as a composer and organist.

Meeting him in both Prague and London on several occasions before the onset of his long and distressing illness, it at first struck me as strange as to how music that sounded at times so full of a deep passionate sense of injustice and sheer virulent anger could come from such a gentle, modest and charming man.

It was only after learning something about his extraordinary life that I came to totally understand the message he was trying to convey. From his teenage years Eben’s experiences brought him face to face with human beings’ capacity to inflict misery and terror on each other. Although his family embraced the Catholic faith Eben’s father was a Jew and as a result the young Petr was expelled from school and along with his brother imprisoned in the concentration camp at Buchenwald.

He often told the story of being taken into the shower-room at this dreadful place, holding the hand of his elder brother, and feeling relief at the moment when it was water rather than lethal gas that was sprayed upon them. This experience unsurprisingly had an effect on the rest of Eben’s life, colouring his attitude not only to his own existence but also of those around him.

Though he could be tough and firm when it came to standards of musicianship, he never expected anything less of himself. He was always the warmest of friends and colleagues and I will long remember the way his face used to light up in surprise and delight when one would show an interest in his work. He was also very fond of giving idiosyncratic directions to his house in Prague on Hamsikova – “You know like in English – being sik-ova-ham”, he would say.

Eben taught the history of music at Charles University between 1955 and 90 – in itself an astonishing demonstration of open defiance. He clearly deserved promotion, but his outspoken criticism and flat refusal to join the Communist Party together with his regular church-attendance made this hope impossible.

Thankfully after the Velvet Revolution, Eben’s time ‘officially’ came and he was lauded as his country’s most-respected musical figurehead, holding most of the important positions in Czech musical life.

Eben’s connections with the UK were long and I know much cherished by him. He was visiting Professor at the Royal Northern College of Music in Manchester in 1977 and 1978 and had close associations with several festivals and performers in this country. Primarily known for his large output of music for organ (I suspect only Messiaen might be considered more important as far as the late-twentieth-century is concerned), it is a great pity that some really wonderful songs are less known, also some powerful chamber music (in particular a String Quartet and a Piano Quintet), orchestral pieces and a large number of sacred choral works that are well within the reach of many amateur choirs.

One can only hope that the death of this kind man and great artist will encourage the re-assessment of his musical legacy.