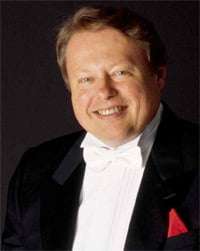 For many music lovers, the news of the sudden death of the conductor Richard
Hickox on November 23rd at the age of 60 will have come as a personal loss.
Young by the standards of his profession, he had – in the last 35 years – established himself internationally, a rare figure among British musicians
in that he became a much-admired conductor of a very wide repertoire and a
champion of British music, both in well-known and unjustly neglected works. Such qualities do not, of themselves, endear the person to his audience, but
what was remarkable about Richard was his self-evident love of the music he
conducted, and his extraordinary ability to convey that love to the
performers through an enthusiasm that was never exaggerated or
self-indulgent, allied to a professionalism that was total. His rather
boyish appearance (a little – but no more than that – on the tubby side) and
his unfailing courtesy and good manners reinforced those admirably appealing
qualities.

There are plenty of conductors who can be less than endearing,
but my first-hand experience of Richard was that, even when time was short
and things were not going as he hoped, he was never flustered or nervous.
Yet he was much more than a safe pair of hands, as I discovered early on in
his career, for I was responsible for Richard’s first recordings for a major
company. He made his first commercial recording for the small Prelude label
around the time I joined RCA Records in 1975 as head of the UK classical
department. Keen to expand RCA’s penetration in British music, I began
looking for a talented young conductor to work in that area. I had heard of
Richard, then 26, Director of Music of St Margaret’s, Westminster (he was
also a fine organist) and about to be appointed chorus-master of the London Symphony Chorus. His agent at the time, Helen Jennings, introduced us and, having
outlined my plans, his enthusiasm convinced me that I had possibly found the
man I was looking for. 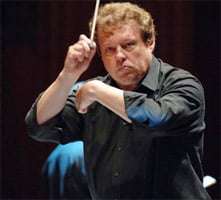 Thus it was that the first two records Richard Hickox
made for a major label, RCA, were with the Westminster Singers, of Masses by
Edmund Rubbra and William Byrd. The Rubbra disc was astonishingly successful – notably in France, to the surprise of just about everyone at RCA. It has
recently been reissued by Chandos, dubbed from disc (the last time I saw the
tape was at the Eisenhower Center in London about a dozen years ago).
Richard’s total grasp of this music and his extraordinarily adept demeanour
at the sessions (which Rubbra attended) reinforced my belief in his
qualities. I produced recordings of him conducting his Richard Hickox
Orchestra of Mozart’s Symphonies Nos. 36, 37 and 38 (quite superb
performances) and English music (including Richard Arnell’s brilliant
Classical Variations, Op. 1 and Vaughan Williams’s The Lark Ascending with
Erich Gruenberg), but the tapes were not released at the time and remain
unissued. I had engaged Brian Couzens and his Chandos team to be sound
engineers for these sessions at the Henry Wood Hall; this was the first time
Richard recorded with Brian. After I left RCA in 1978, Brian set up Chandos
Records and ten years later Richard made the first of his more than 280
records for that label. By then, his gifts had become widely appreciated,
having recorded for Argo, EMI, Pickwick and ASV (a very good Beethoven
Symphony cycle with the Northern Sinfonia, formerly available from
Sanctuary; he also conducted the composer’s five piano concertos with
Cristina Ortiz for Pickwick).

Mention of the Beethoven symphonies and concertos should disabuse the
commonly held belief that Richard was only a ‘British Music Specialist’. Of
course he performed and recorded a lot of British music but he was also
excellent in what one might term ‘standard’ repertoire. There was a notably
penetrating account of Fidelio with the English National Opera about ten
years ago, outstanding appearances at the Royal Opera House, Covent Garden
and concerts in a wide range of repertoire with the BBC National Orchestra
of Wales, of which he was Chief Conductor for many years.
Appointments in mainland Europe and in the United States attested to his
burgeoning international reputation with many of the world’s leading
orchestras, allied to his Music Directorship of Australian Opera, a post
recently extended for four more years. All of these achievements
demonstrated a personal appeal, a breadth of repertoire and deep
professionalism that makes the suddenness of his passing the more
disturbing.

Richard’s greatest and most lasting legacy will be his recordings, of which
he made close on 300. The vast majority of these were for Chandos, an
association that lasted until the day he died, and which includes such truly
great performances as those he gave of Britten’s War Requiem (in 1993 he had
conducted the chamber orchestra in that work, with Rostropovich directing
the main forces); Delius’s A Mass of Life (at the
time of a truly overwhelming performance at St Paul’s Cathedral, part of the
City
of London Festival); the greatest performance I can ever hope to hear of
Delius’s Violin Concerto with Tasmin Little at the Three Choirs Festival in
Gloucester a few years ago; and operas by Britten and Walton.
Other really fine Chandos releases include a complete cycle of Rubbra
symphonies and others by Vaughan Williams and Malcolm Arnold – alongside
similar issues so numerous
that the serious music lover will have his or her own favourites.

As someone
who knew him for over 30 years and followed his career with the greatest
interest, I can honestly say that I never heard him give a performance that
was less than very good, and was very often considerably more than that.
We owe him rather more than we might think, perhaps, and I imagine that, as
time passes, his loss will be felt increasingly keenly.
Richard Hickox is survived by his wife, the mezzo-soprano Pamela Helen
Stephen, and his three children, Tom, Adam and Abigail.